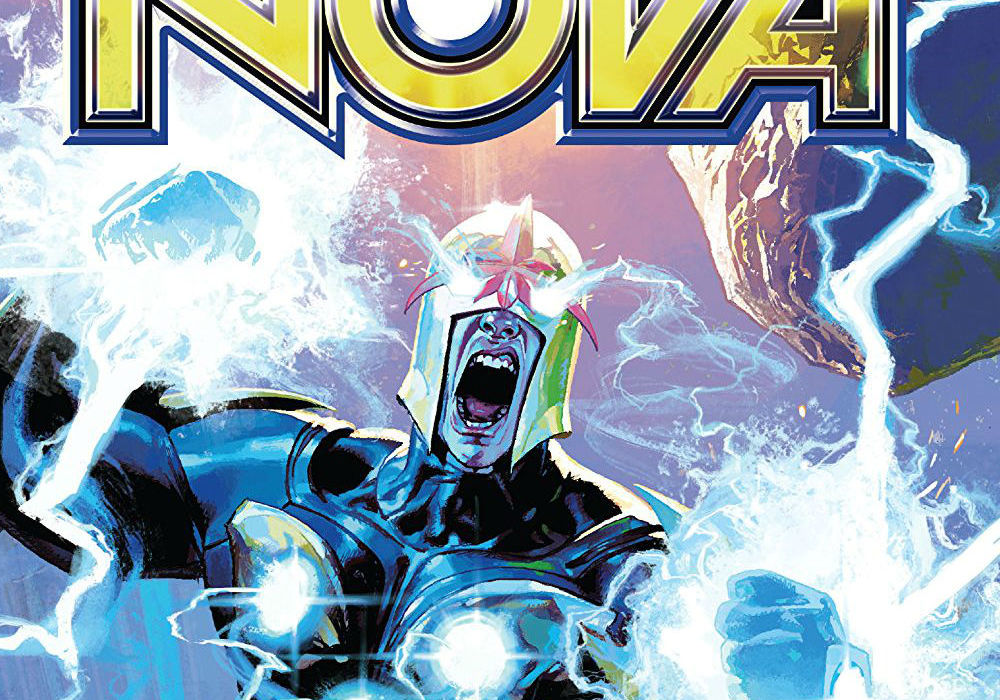 Some of the most wild and imaginative ideas at the House of Ideas can be found in space. Beyond the now-familiar Rocket and Groot there’s the likes of Beta Ray Bill, the bionic alien with the power of Thor. If that doesn’t do it for you, we’ve got Ego the Living Planet or maybe Cosmo, the soviet telepathic dog. As great as these ideas are though, trying to get into Marvel’s cosmic comics can be daunting. At least it has been in my experience. There’s always so much going on and no matter where you jump in, it feels like you’re behind. 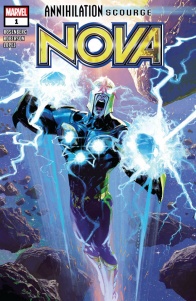 Written by Matthew Rosenberg
Illustrated by Ibraim Roberson
Lettered by VC’s Cory Petit
Colored by Carlos Lopez
The universe hangs in peril! With no room for old grudges, Nova is forced to team up with one of his most nefarious adversaries – ANNIHILUS! But can Richard Rider trust the ruler of the Negative Zone to fight alongside him – or will this turn into a war with two fronts?

To the writer’s credit, he tries to catch readers up to speed. It doesn’t quite feel like that was actually achieved but it was definitely attempted. Some events that went down in “Annihilation – Scourge Alpha” #1 are shown again here before the story continues. The first three pages are devoted to Richard Rider’s backstory. The second and third pages especially, an overstuffed two-page spread, make it clear that so much has happened before we even got to this latest event.

When contamination from the Cancerverse spills into the Negative Zone, Annihilus recruits Richard Rider for help. One of the highlights of this book is the back and forth between the two. I don’t quite remember Annihilus every being this chatty but it works well here. It’s fun to see Nova openly admitting he tried to throw his enemy into the sun or Annihilus stealing from the Fantastic Four he loathes so. My favorite moment of the two was definitely Annihilus not believing that Richard was the Nova to actually kill him. The Negative Zone’s favorite bug monster is an over the top villain while Nova is a grizzled hero, both incredibly powerful and incredibly petty at the same time, barely hiding their contempt for one another as they work to save the day.

The villains of this issue were nowhere near as interesting though and fell pretty flat. If I understand it correctly, the Cancerverse baddies are basically a massive, undying zombie horde in space. There are interesting ways to depict that but that’s not really explored in this issue. The villains are basically faceless goons and though it is stressed that the stakes are high, you never really feel that danger. Then there’s the other villain, the mastermind behind it all it seems, the Sentry. Which…well, I’m sure there’s a good explanation. As of now, it doesn’t make any sense. Though to be fair, I think the character stopped making sense all the way back in “New Avengers”. Always Void this and Void that. Weren’t the two halves merged or did I imagine that?

The comic did end on a pretty interesting note, I have to say. When Sentry shows up with the Revengers (Cancerverse Avengers) and Richard is almost infected again (he’s been made a Cancerverse zombie before), he panics and breaks free. Then he just…hightails it right out of there. He abandons the fight and the people he was fighting for. I honestly didn’t see it coming at all, though on re-read, Nova’s trembling hands were a sign. It’s especially unexpected because Richard Rider, at least in personality, is a classic everyman hero. He’s similar to Spider-Man in that way, right down to the alliterative names. Win or lose, you expect the good guy to do the right thing no matter what, not this. At the same time, it makes sense though. The character has been through a lot of trauma, now it seems it’s taking its toll. Most importantly, this moment succeeds as a final page stinger because now I have to know where that plot-line is going.

The art is a bit of a mixed bag, in my opinion. I had high hopes after seeing the first page. It really is a great page, a side profile of Nova, moments in his history shown on his helmet. Then the very next pages were that overstuffed two-page spread. There are moments throughout the comic when I wished the artwork was more detailed. It seemed like a lot of the time, there were no real expressions on characters faces and their eyes and mouths were just dots. On the two-page spread (I know I keep revisiting it), Ronan the Accuser is there and it took me longer than I’m proud of to realize it was him. There’s a visual gag or two that fell flat (namely Annihilus with that fake mustache) but the action sequences were pretty solid. It could have been a lot worse but it could have been better too. All in all, that actually describes the comic pretty well too.

Final Verdict: 6.0 – Nova ‘nopes’ right out of the Negative Zone in a okay issue.