I bought my very first comic books back in fifth grade, two Marvel Select ‘double-sized flip magazine(s)’ from the 7-Eleven. One of those Marvel Selects revolved around the X-Men while the other revolved around the Avengers. That one had “New Avengers” #15 on one side while on the other, in “Young Avengers” #2, a young Cassie Lang discovered her superpowers for the very first time… 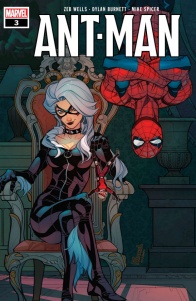 Written by Zeb Wells
Illustrated by Dylan Burnett
Lettered by VC’s Cory Petit
Colored by Mike Spicer
The threat of Macrothrax and the impending invasion looms large! With no choice but to call the Avengers for help, will Ant-Man be able to convince them to take both this threat and himself seriously? Plus, when a certain web-slinging hero joins the investigation, will the stage be big enough for two wise-cracking crime fighters? Guest-starring Spider-Man and the Black Cat!

Times sure have changed for Cassie. Her father was dead, now he’s back. Then she was dead, now she’s back. Now she’s got a new superhero identity and Ant-Man and Stinger fight side by side against the terrifying (and frankly, gross) Macrothrax! In this issue, the duo get a little help from Spider-Man and Black Cat so they can learn more about their foe.

‘Their foe’. In general, Ant-Man doesn’t really have much of a rogues gallery. There’s Yellowjacket but besides him…Egghead? Whirlwind? Heck, after they used up Darren Cross in “Ant-Man”, they had to poach one of Iron Man’s enemies for the sequel. Well, Ant-Man finally has some enemies now. These villains are truly an impressive lot…and absolutely disgusting.

Interesting? Definitely. They leave an impression and will hold your interest. The bug-speak alone, stilted but not repetitive or annoying proves intriguing. Unique? Without a doubt. Ant-Man fighting bugs might not seem like anything new but Wells and Burnett have put their own original spin on it. Scary? Yes, actually. Macrothrax receives a message through pheromones in a page that is both beautiful and full of menace. They threaten an ant-hill at the end of this issue and it actually feels like a huge threat on par with the Death Star or something.

Still, they are mainly disgusting. The gross-out factor is on purpose though and credit where credit is due, artist Dylan Burnett really leans into it. Fair warning if you’re squeamish, you can feel the worms that make up Thread’s body wriggling on a still page. I won’t even get into what they did to poor forgotten Humbug.

The relationship between our heroes is interesting too. Right from the start, fatherhood has defined Scott Lang. Even when he’s a human dumpster fire, Scott is a loving father. It’s a crucial element of his character. Likewise, being the daughter of Ant-Man has defined Cassie Lang right from the start. The only reason she became a superhero was to honor his legacy. Both of them had to grieve the death of the other at one point…

You put that up against where they are now and it’s even more fascinating. Scott upended his life to be close to his daughter and she wants to move away. He’s struggling to treat her as a partner and not just his kid. Cassie practically deified her father back in “Young Avengers” and now she sees him as a “circus clown”. Scott’s words, not mine. Both are struggling to find some middle ground but it’s clear that they mean a lot to one another and love each other.

The thing that probably stands out the most though is this comic’s strong sense of humor. Now humor is, of course, subjective. What makes you laugh may not get so much as a chuckle out of someone else. This book cracked me up. The jokes start coming as soon as the recap page. Pamela the Ant has so much personality and her role as Scott’s nosy landlord is just great.

There are plenty of other funny bits too. I actually laughed out loud when Scott poked fun at Iron Man’s sobriety. The Avengers, even stoic Black Panther, clown Ant-Man right to his face. I don’t know exactly where Scott became Marvel’s Booster Gold (probably around the movie) but I like it. My favorite bit was probably Spider-Man being jealous of Black Cat’s interest in Scott. Both Spider-Man and Ant-Man are human disasters and Spidey was actually the bigger one in this issue, being hilariously petty towards the titular hero.

That good humor is made even stronger by the artwork. Colorist Mike Spicer provides vibrant colors to accompany artist Dylan Burnett. Burnett doesn’t shy away from exaggerated expressions and a more cartoon-ish art style that fits Ant-Man very well. It’s funny every time Scott yells in exasperation or when Cassie scowls at someone. You can really feel Scott coming undone the weirder his life gets and Cassie’s annoyance with her dorky dad. All in all, a really fun comic.