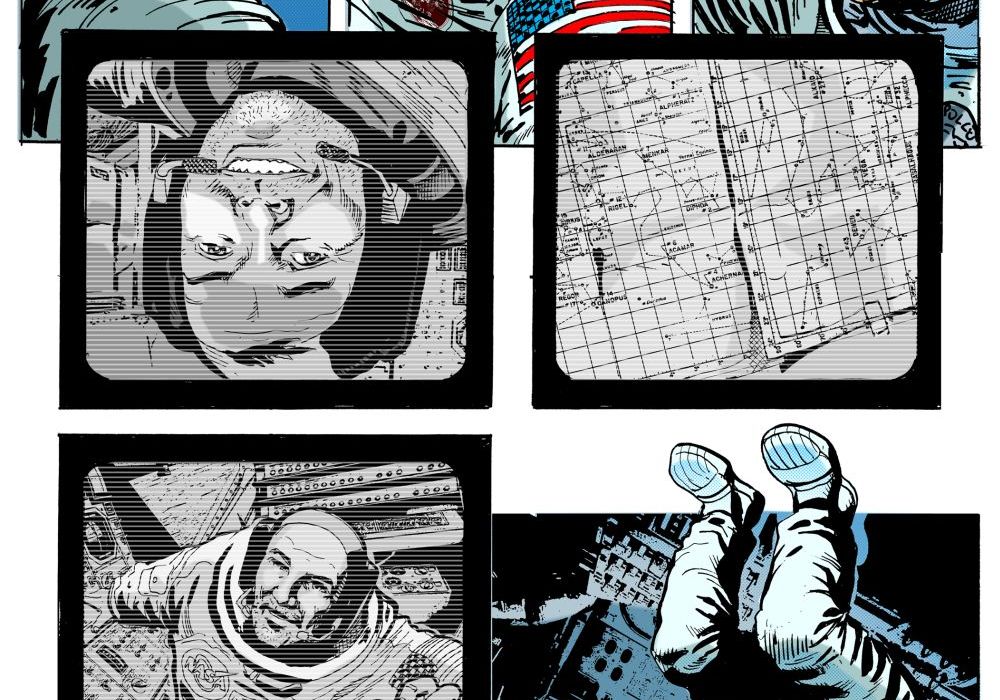 Is there anything new to tell about the first manned flight to the moon? The new graphic novel from SelfMadeHero/Abrams seeks to answer that question by expending the boundaries beyond the mission itself, touching not only on launch and landing but also on the social, psychological and historical currents that shaped the Apollo 11 flight – from the people on the rocket to people in the white House to the people on the streets. But unfortunately it ends-up focusing on the wrong parts of the story. 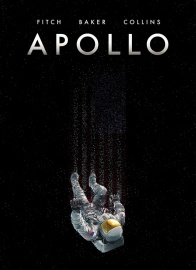 In 1969, humankind set foot on the moon. Neil Armstrong, Edwin ”Buzz” Aldrin, and Michael Collins carried the fire for all the world. Backed by the brightest minds in engineering and science, the three boarded a rocket and flew through the void—just to know that we could. In Apollo, Matt Fitch, Chris Baker, and Mike Collins unpack the urban legends, the gossip, and the speculation to reveal a remarkable true story about life, death, dreams, and the reality of humanity’s greatest exploratory achievement.

Though noble in intentions this new graphic novel, a chronicle not only of famous Apollo 11 mission but also of the “national mood” around as it were, misses its mark. Its ambitions are high but it fails to achieve them – either due to the choice to focus on parts of the story that had been told a dozen times before or due to lacking artistic representation.

This is not to say that “Apollo” is a bad book, it is professionally written and drawn with clear ideas about what it wants to be, but when it is all said and done and fails to rise about itself; this is a work about people who went to the stars but itself stays safely within the atmosphere. There are moments where you think the story is going to be something more, that it is going to become transcendental, but is always draws back. Sadly.

The moment in which the book is closest to achieve greatness take place, ironically enough, not in space but back on Earth: looking up from the White House then president Richard Nixon grouses and grumps that even though the mission was lunched under his presidency all the credit will go to his popular predecessor John F. Kennedy (then already on his way for political sainthood following his assassination). It’s a great contrast and reminder that nothing happens in a void – that the space mission, for all the high-falutin declarations about “giant step for mankind” this was a human decision, accepted for human reasons; and that, like everything else on this mudball, it is mired by politics.

The small and selfish Nixon is, for the relative shortness of his screen time, the best character in the book. we see him and we ‘get’ him immediately, it probably helps that man already had cartoonish features which makes him standout amongst the cast drawn by Mike Collins, Kris Carter and Jason Cardy. Meanwhile the attempts to draw psychological depth from the astronauts themselves is less successful – Buzz Aldrin’s relation with a stern father who was always angry that his child didn’t pick a military career has an obvious arc to it (even if it is based on fact – it is the creators’ choice on what to focus). Likewise, a short scene focusing on American troops in Vietnam is a good opportunity to showcase that you can’t actually transcend earthly problems simply by flying over them. the problem is that it is too short of scene, and the full ramifications of it (racial, political, military), are not even close to being explored. Many scenes in the graphic novel are like that – they are just ‘there.’ Gesturing at something yet failing to elaborate upon it.

The art is part and parcel of the problematic nature of the book, and exemplified its inability to rise above technical acumen. It is good enough, and I am sure there many days and weeks of research dedicated to everything from instruments to uniforms to the people themselves. But because of that dedication to aping reality almost all elements of the sublime are erased from the book. This is comics, and comics can do almost everything. So why am I looking at the faces on the page and thinking to myself “TV series?” the figure-work might be close to the real people involved but it is also stiff and overtly-similar– when your main protagonists are all square jawed squeaky clean white guys it’s liable to cause confusion.

It is true that I have a preferred style, that photorealism is something I am not often a fan of (and that “Apollo” would work better for fans of draftsmanship) – but I’ve always found that in good comics the art appears ‘inevitable.’ That if the comics works you cannot imagine someone else drawing it because the art becomes the word becomes the meat and soul of the work. Here I can see a separation – the two plains (words and pictures) do not intersect smoothly.

Consider the scene with children throwing paper planes which become toy planes which become airplanes which lead to rocket propulsion. A montage of the arc of flight technology – a good idea, and something that the medium of comics excels in, but the performance is lacking: the figures are stiff, and lead in to the images of the lunar-module it too short. This is meant to be a grand moment, but in the end it is only a good one.

This is a book that I wish dearly I could love, a book to wants to do something different with a well-trodden territory, but I end up only tangentially liking.