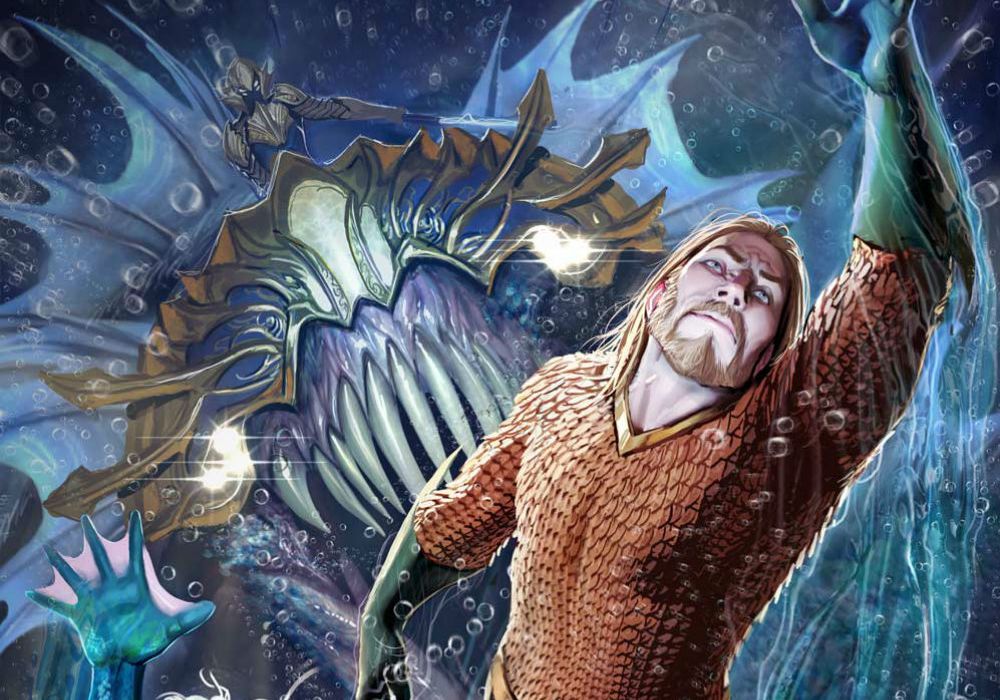 ‘Underworld’ is well underway. And Stjepan Sejic has fully entrenched his special brand of magic within Dan Abnett’s myriad threads of underwater realpolitik. Let’s dive in. 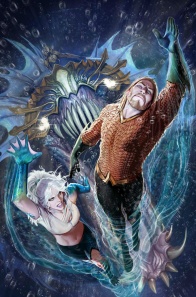 ‘UNDERWORLD’ part two! Enraged by rumors of Arthur’s survival in the slums of Atlantis, the ruthless King Rath orders the use of ancient Atlantean techno-magic to track down the Aquaman at all costs! But the ex-king Arthur can’t hide for long when his fate collides with that of a mysterious young woman on the run from Rath’s own secret police. Her name: Dolphin.

The usurper, King Rath, has a smirk riding the corners of his square-jawed face when told of Mera’s onslaught against the shell that Atlantis has retreated behind. “Let us watch with relish as she exhausts herself with this futile tantrum and beats her hands bloody on the unyielding crown of thorns,” he boasts. “The public will be alarmed, but ultimately this will be a vivid and useful demonstration…”

Please let it be all that. And more. Because while Rath’s swarthy, misguided confidence refers to Mera, specifically, it’s hard to read these words as any less than Dan Abnett’s statement of intent that throughout “Aquaman” #26 – and, frankly, for as long as we’re all lucky enough to be graced by it – Stjepan Sejic’s art will have every opportunity to blow us away with its intricate and ethereal lines. It’s especially telling that Rath’s comment comes immediately after a particularly vivid demonstration of Sejic’s brilliance. Across a full-page splash, he creates a swirling vortex of fury and might as Mera rains down a blow with such kinetic ferocity it sends ripples through the water and resonates out from the page.

And it’s not just the bombastic, vibrant panels that Sejic captures so well – although Abnett’s script offers up an ample helping of choice moments; a half-page whirlpool of Mera’s wrath, here, and a double-page spread of Arthur and Dolphin trading undersea uppercuts with a team of Drift warriors, there – no, it’s the overall movement and mechanics that make “Aquaman” #26’s artwork so fluid. During the quieter beats, Sejic draws these people with a lithe, almost weightless quality that feels both buoyant and subject to the push and pull of ocean current. Tiny bubbles float up and around the background and the fore, so that even Abnett’s dialog heavy sequences of power-grab plotting and gangster machinations retain an effervescent quality. And when Arthur and Dolphin engage with the Drift, Sejic painstakingly treads a path of disturbed water in the wake of kicks and thrown fists. It all feels otherworldly and authentically underwater.

Abnett sprinkles a threat of double-crosses throughout the threads here. And while he pays out some storylines in “Aquaman” #26 less than others, there is deliberate sense of how they’re all being knotted together. It’s a testament to how great a writer Abnett is that he’s able to clearly outline the motivations and desires for each of the key players, given the relatively limited page-time that characters like King Rath, Krush, and Mera actually have. By succinctly capturing their essence – Rath is over-reliant on Atlantean technology and over-confident in his own appraisal of situations, Krush is an opportunist that will sway the situation to his own advantage, Mera is just bloody pissed off – Abnett deftly juggles the tumult that Atlantis has been thrown into. Equally impressive is the way he handles the transition between some of these scenes.

Following their fight with the Drift, Arthur follows Dolphin to a Hadalin sanctuary, hidden amidst the jagged nooks and crannies of the broken, old undercity. “I think it’s going to take more than the likes of me to save Atlantis,” Arthur says after a brief introduction to her allies. And following that line, Abnett flips over to the thread involving the nefarious crimelord of the Ninth Tride, Krush. The fact Abnett phrases the transition this way implies that Arthur will almost inevitably need to ally himself with partners whose interests are far less honest and altruistic than his and Dolphin’s.

Over two-dozen issues into the Rebirth portion of his run with the character, Abnett has an innate grasp of Arthur’s voice, even in this shadowy, Atlantean vigilante iteration – The Aquaman. And while he’s firmly in control of that voice, it’s fun to see Dolphin’s voice handled exclusively by Sejic. Mute as she is, Dolphin is reliant on gestures and facial expression to communicate. Sejic’s aptitude for character acting allows for a distinct cadence to her body language. It’s a cadence that radiates strength, compassion and frustration in alternative waves.

There are many things rotten in Atlantis in “Aquaman” #26. But Abnett’s writing and Sejic’s art are not among them. Not even close. Abnett keeps sowing seeds of discord in between bouts of intrigue and action, while Sejic mixes majesty and menace with an ethereal, watery glow. Don’t get me wrong, Abnett is crafting a really shrewd arc. But let’s be honest, Sejic’s art is the real hero right now.

Final Verdict: 8.5 – Stay a while, and swim in Sejic’s garden of underwater delights.