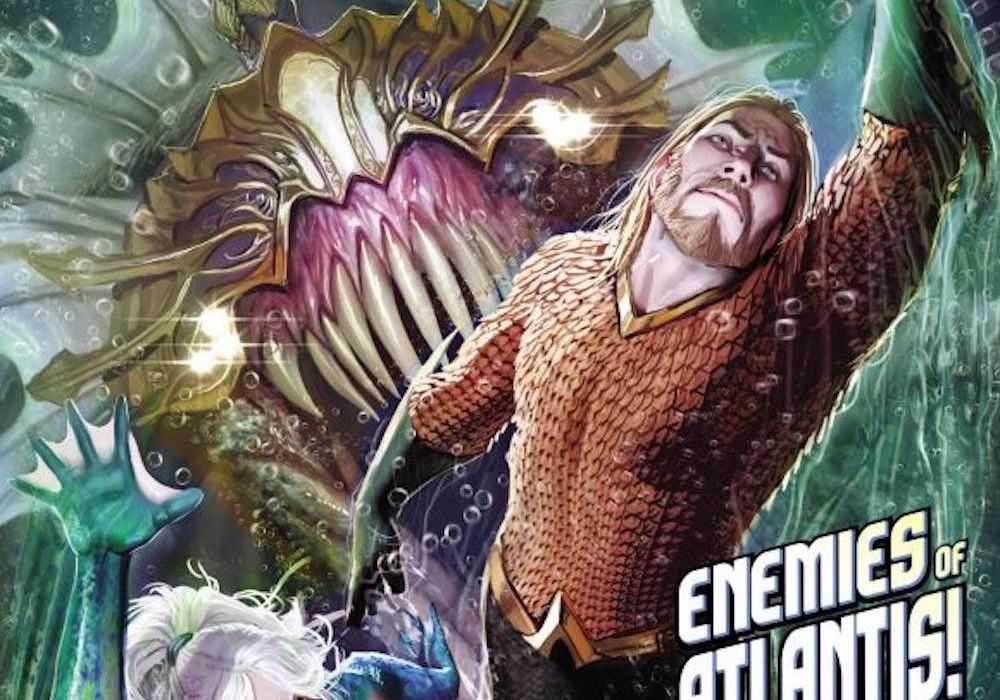 ‘Underworld’ continues in a great story by Dan Abnett with the fantastic artwork of Stjepan Sejic. 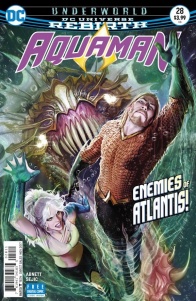 “UNDERWORLD” part four! Caught in the claws of the monstrous crustacean crime baron known as Crush, Aquaman and Dolphin are bargaining chips in a most dangerous game with the cruel King Rath, who’ll do anything to keep the secret of Arthur’s survival from the people of Atlantis. Meanwhile, Mera’s mission to break into the sealed kingdom hits a rough patch when Atlantis’ magical technology short circuits on a massive scale—especially those devices made of a certain metal…

So far as the story of “Aquaman” #28 goes, there is far less focus on the eponymous character than people would think. However, Dan Abnett manages to make this work very well, with the spotlight falling far more on those around him, and thereby helping to keep a more holistic perspective of Atlantis.

Abnett excels in his use of the supporting cast, both heroes and villains. While many other stories may have focused near exclusively on Aquaman himself, Abnett instead makes Arthur into somewhat more of a leader around whom the majority of the plot evolves, much like Aragorn of J.R.R. Tolkein’s The Lord of the Rings. While Aquaman’s story is dour and dire, the rest of the plot instills a stronger sense of hope, from Dolphin to Vulko to Mera.

In Vulko and Ondine’s journey, Abnett finds his humor for the plot. With the fact that Ondine’s martial and deceptive talents complementing Vulko’s more cerebral focus quite well, their back-and-forth banter is very amusing to read. Even their failures, as bad as they are for their own interests, still help to humanize the duo and get a good laugh out of them. Furthermore, their adventure gives a good look into a different side of their culture, given the emphasis on Atlantean ancestors. Ondine’s combat and stealth prowess complements Vulko’s more cerebral talents quite well.

Mera and Garth’s trials and tribulations showcase a more serious side of the plot, with the reluctant, yet willing use of magic on the latter’s behalf. Evidently, the use of Atlantean magic is quite hard for him to resist, hence why he wanted to do so for so long. In allowing himself to try with his likely incomplete studies, Garth shows strength of character that was not displayed as clearly in the previous issue.

That said, Abnett does have some minor issues with developing his villains. In particular, the Silent School of Atlantean sorcerers seem to be less a collection of individual characters, and more an overarching force that is, on the whole, somewhat harder to take seriously in a close combat fight. Without much to differentiate one member from another, they come across as a sort of generic threat, especially when contrasted against the relatively mundane criminal underworld of Krush or the more directly dangerous coral sorcery of Kadaver, whose taciturn, possibly mute nature allows him to function as an interesting counterpart to Dolphin while his more torturous use of his constructs makes him truly unnerving.

As always, Stjepan Šejić’s artwork is fantastic in both pencils and colors. His uncertain, soft pencils show the undead Sentinels of the Treasury in disturbing, yet interesting detail. These specters of the Catacombs are bright, yet clearly unnatural, the magic of their being on ready display.

Šejić is a master of facial dialogue. His use of facial expressions helps bring to life even the most commonplace of scenes. Nowhere is this better seen than with Dolphin, the mute Atlantean mutant. In every scene she is a part of, she manages to tell a lot with nothing more than a look of frustration, of peace, or of happiness. Where other artists may have failed to adequately portray her, Šejić manages it with a flair all his own, her silence making her seem far more expressive, even when that is not quite the case, as there is no dialogue to distract from her body language. This attention to body language carries through to Šejić’s portrayal of Ondine and Vulko, with their emotions far more on display than some others due to the tension of their secret mission. Ondine’s aggravation and terror are played well against Vulko’s confidence.

Color plays a significant role in Šejić’s art as well. The light of the globes in Ondine and Vulko’s hands cast shadows across their faces in a realistic way, the purples and browns of their outfits blending in well with the stonework’s blues to give a natural sense of camouflage. By constrast, the beautiful colors shown in the scenes of Garth’s magic or the fight of Aquaman and Dolphin against Kadaver are more of a contrast against their environments, giving a better sense of them sticking out, rather than working their hardest to fit in and stay out of sight. Most spectacularly, the specters of the dead are rendered with a mix of color and pencils to a degree that they seem even more three-dimensional than many others.

Final Verdict: 8.0 – While the story of “Aquaman” #28 is well written on its own, the artwork makes it all the greater.