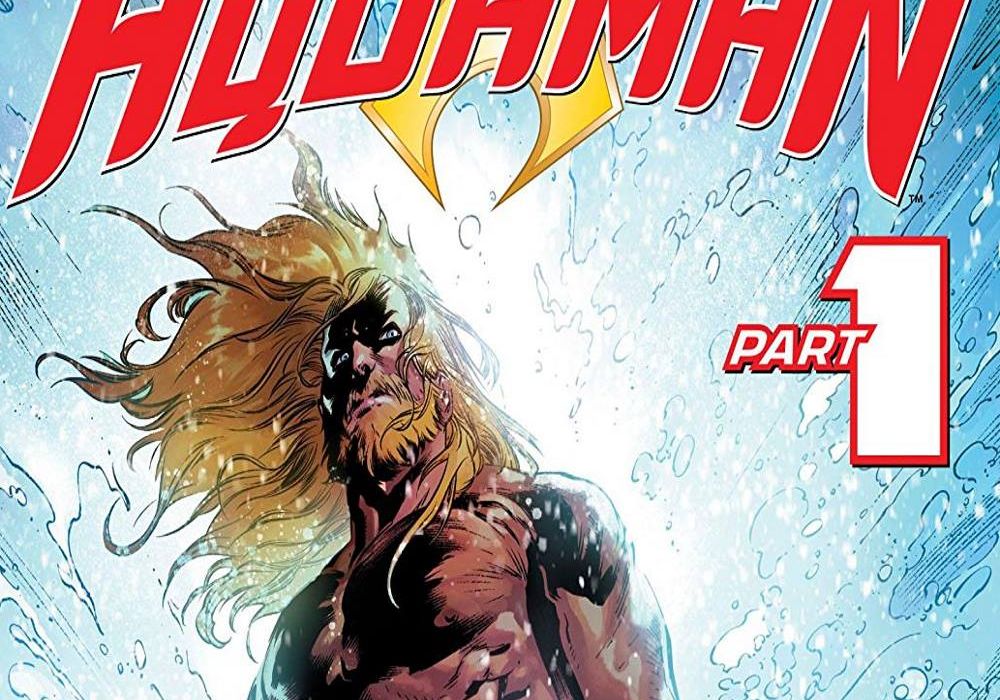 New comics fans follow characters, comic book veterans follow creators. That’s obviously a generalization, but after you’ve been following superhero books long enough you know there are no bad characters, just bad stories. Which brings us to “Aquaman” #43. I’ve never been a hater of the King of the Seven Seas- I think talking to fish is a rad power! But I can only read a finite number of comics every week and ‘ol King Arthur Curry never really made it to the top of my pull list. Enter the most unlikely of creators, Kelly Sue DeConnick to get me absolutely juiced about “Aquaman.” 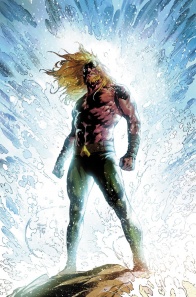 The tides turn for the Sea King with a new creative team! Star scribe Kelly Sue DeConnick (Captain Marvel, Pretty Deadly) and red-hot artist Robson Rocha (TEEN TITANS, SUPERGIRL) take the rudder to steer Aquaman into uncharted waters. In the wake of “Drowned Earth,” an amnesiac Arthur washes ashore on a remote island, and ends up being cared for by a young woman named Callie, who’s just a little TOO curious for comfort. And as a lifetime of horror movies has taught us, there’s something strange going on in this island village. Aquaman needs to come to his senses quickly…or he might wind up sleeping with the fishes instead of chatting with them.

Let’s take a moment to compliment DC in general. They’ve brought on some serious talent recently, including a lot of people who rose to fame writing Marvel heroes. Kelly Sue DeConnick (heretofore referred to as KSD) is of course famous for putting Carol Danvers into the popular consciousness as a mainstream superhero. Her creator owned work like “Pretty Deadly” and “Bitch Planet” is as prestigious as comics gets. The estimable KSD is best known for her kickass, bluntly feminist superhero and fantasy work. The buff, bearded Aquaman is not an obvious pitch for her.

But open your mind humble superhero fan! Some of KSD’s best superhero work has happened in unexpected series. Her deeply weird “Osborn: Evil Incarcerated” miniseries was totally twisted. Her “Avengers” work was some of the best of the last ten years, but was confusingly collected as “Avengers Assemble: Science Bros” and “Avengers Assemble: The Forgeries of Jealousy” (I assure you that they are two of the best “Avengers” stories you’ve never read). My point is, don’t put KSD in a box. She hates boxes, and she will kick yours to pieces.

So what do you do when you’re penning the 43rd issue of a superhero ongoing with a giant, if slightly facetious, #1 slapped on the cover? You give your hero amnesia. “Aquaman” #43 has a wonderful dreamlike quality to it, from the first words of narration to the last haunting images from Robson Rocha, Daniel Henriques, and Sunny Cho. The superhero known as Aquaman has washed up on the shore of a town that feels disconnected from time and space. The residents have names from cultures all over the world and the technology seems practically medieval. Aquaman doesn’t know who he is, but he quickly makes himself useful to the quaint fishing community.

A lesser story would create a melodramatic push and pull with Arthur’s memory. How will he get it back? Does he prefer this simple life? Will he answer the call of destiny? But KSD forgoes those questions and instead gets you invested in the residents of the town itself, with major work done by the killer art team. The wild-haired bespectacled Loc seems likely to get himself killed, and the mysterious Callie has some sort of ethereal connection to the sea. Callie is always drawn in full superhero pose, her red clothes billowing in the ocean spay like a cape. Even without the hints that the central amnesiac figure is a superbro played by Jason Mamoa, this comic would function well as a fantasy story. It’s got a real old-school Vertigo feel to it in the best possible way.

That intersection between dreams and horror and legend and mystery would not exist without every member of the art team. Characters in KSD stories are often beautiful, but she ain’t gonna accept some cheesecakey nonsense. As such, Rocha needs to frame multiple characters as beautiful, but also powerful. It’s a testament to his ability that with only a few pages, he can give every figure so much strength and wisdom all through positioning and body language. The dialogue can be sparse in pages, but the comic always moves at a slow, dreamy pace, forcing you to absorb all the visual detail.

With the rise of digital art techniques, inker is a job you see less and less in comics. But damn, this issue would have not been possible without Daniel Henriques. In an “Aquaman” comic, I guess there’s going to be a lot of water, but Henriques textures all of it in unique ways, making the rain, the waves, the surface of the sea, and the magical moving tide as distinct from each other as the human characters. Colorist Sunny Cho has to work with a muted color palette, but instead of flattening the images out, the foggy grey gives the pages depth and urgency.

I couldn’t tell you the secret of a great “Aquaman” comic, but this team has got it. There’s magic and mythology swirling on every page. DC likes to hold its characters up as mythic, modern gods, but there always seems like there’s a missing link between the primal mystery in old legends and the four color adventures in a superman comic. This is it. This issue is that missing link.

Final Verdict: 9.2 – The inimitable Kelly Sue DeConnick is joined by a top notch art team to bring magic and mystery back to the ocean.