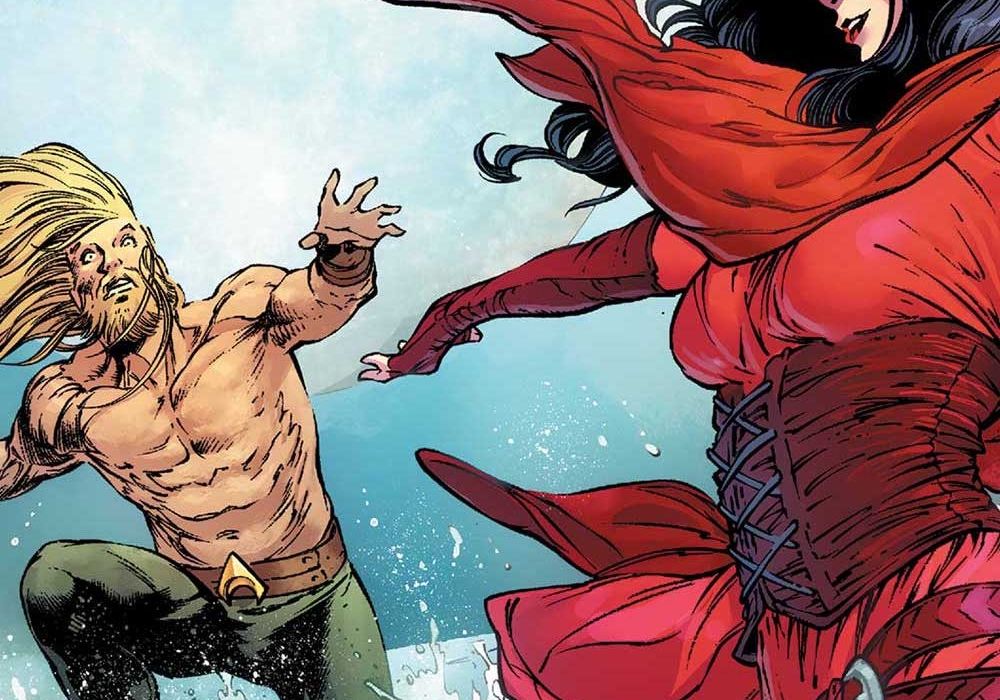 When readers first learned that acclaimed writer Kelly Sue DeConnick was coming back to Big Two comics via “Aquaman,” most readers likely expected a back-to-basics approach for the hero. However, DC has offered readers anything but with the title from day one when “Aquaman” first launched in Rebirth. While the first part of author Dan Abnett’s run appeared to more concrete approach for Arthur Curry, issue #25 considerably changed the tone and direction of the run. DeConnick and artist Robson Rocha have thrown another massive curveball to the title by wiping away Arthur’s pre-established memories as Aquaman and reinventing the mythology of Atlantis. With the meandering nature of the first installment detracting from the pacing, will “Aquaman” #44 turn the tides of quality? 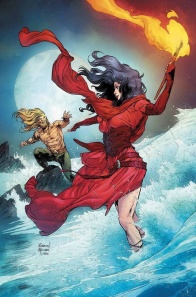 Aquaman no more! Still reeling from the stunning events of the last issue, the onetime Sea King becomes obsessed with finding the mysterious redheaded woman from his vision. But where to even start? Don’t worry, Arthur: that mysterious redhead is looking for you, too, as Mera begins the hunt for her missing mate. Amnesiac Atlanteans, redheaded mermaids and more, all on a collision course inside the mysterious town called Unspoken Water.

“Aquaman” #44 does a great job expanding on the tone of DeConnick’s first issue while enriching the overall world of the series. Readers finally start to get answers as to where Curry washed up on and while the comic still retains an endearing, elusive nature. DeConnick does an excellent job writing dialogue that is obtuse but still fascinating which serves to draw readers into the world of the new “Aquaman” status quo. This installment of the series goes beyond where readers would expect and builds a lot of tension leading to the final sequence.

Artist Robson Rocha is a great pairing for DeConnick. The splash page kicking off the issue is the single best comic book page I have seen from the artist. “Aquaman” #44 takes a lot of subtle risks with layout and design showing that Rocha is ready to join the best artists of DC Comics. Even scenes of Curry chopping wood have great dramatic tension and a fluid feel. There is even a playful and expressive nature in the art allowing Rocha to serve as a good artist for the world of “Aquaman.” While these first few issues have been stripped back, offering a more grounded take on the hero, I think Rocha’s pencils are really going to shine in subsequent action-packed installments that appear to be on the way.

There’s a great unsettling tone to “Aquaman” #44 due to Curry’s strange new environment. DeConnick carefully measures the tone of the issue to ensure these sequences don’t become too overwrought or obvious. Instead of ending a scene with a character offering up cryptic information to Curry, DeConnick ensures the supporting cast offer hints and clues to what is going on beneath the surface. Curry’s conversation with Wee is a great showpiece for how the comic strives never to be too obvious.

The centerpiece of the issue is the climax where DeConnick reveals a massive secret about Arthur’s current domestic life. The last issue only offered a hint at what was happening in the cliffhanger, but this entry greatly expands the world and mythology. I hope later installments will continue the trend of offering just the right amount of plot and story reveals to keep readers truly invested in the story all the way through. The criticism of the series moving along too slow can be a double-edged sword because the pacing of this kind of story needs to be a little slower than the typical superhero comic. Arthur is in a brand new world and the title strikes a darker, more ominous tone full of paranoia and animosity.

“Aquaman” #44 is an impressive installment full of intrigue and a somber tone. The issue utilizes some of the most interesting aspects of the character to reinvent the mythology of Arthur Curry. DeConnick tells a great “Prisoner”-influenced narrative about Curry being stranded on an unfamiliar location. Artist Robson Rocha’s pencils and influence over the story is the most impressive artwork I have ever seen from him. Between the endearing and odd cliffhanger and opening pages, I can’t wait to see more of Rocha’s fantastic pencils. Sunny Gho’s colors are also really detailed, adding an interesting visual dynamic to the palette. Based on the slow-moving nature of previous DeConnick-written titles like “Pretty Deadly” and even “Aquaman” #43, readers wouldn’t expect to see such a huge payoff on the story. “Aquaman” #44 does a great job providing answers while enriching the overall tone and direction already established by the debut. I hope DeConnick and Rocha will take as much time as possible to explore the rich new world of “Aquaman.”