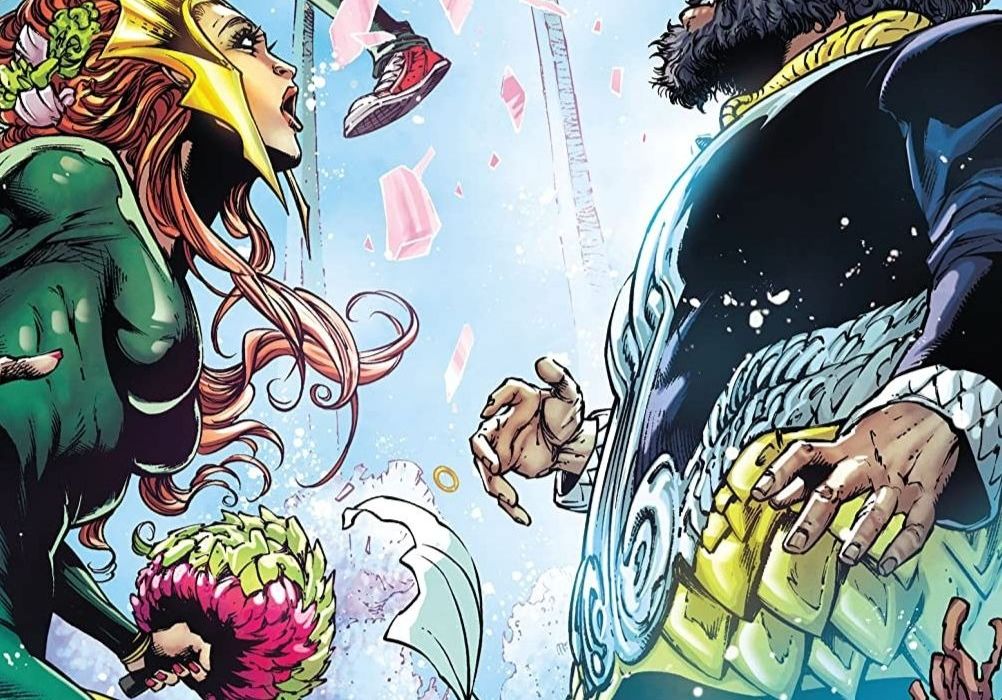 There are an awful lot of monarchies in comic books. In a way, it helps with the larger than life stories of superheroes, with these epic struggles and political intrigues being between squabbling family members. But still, it’s interesting to see how these stories of gods and monarchs fit into our world. While there have been comics that comment and critique this form of government, in many cases the kings and queens of comics still remain. That’s why it’s interesting that monarchy is at the forefront of Kelly Sue DeConnick’s most recent issue of Aquaman. There’s a lot going on in “Aquaman” #61, but Kelly Sue DeConnick anchors the issue with a big question as the central conflict, “who should lead?” 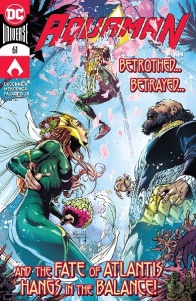 Cover by Daniel Henriques, Marcelo Maiolo, and Robson Rocha
Written by Kelly Sue DeConnick
Illustrated by Miguel Mendonca
Inked by Miguel Mendonca
Colored by Romulo Fajardo, Jr.
Lettered by Clayton Cowles
For whom the wedding bells toll, Arthur? They do not toll for thee! It’s a race to the chapel, as Mera is awake and betrothed, but who is the groom, and why isn’t he Arthur? There is a greater mystery at work, and Jackson makes a deep-seadiscovery-but not before a depth-defying battle with Orm! Speaking of Ocean Master, he’s bringing all of Dagon to the wedding ceremony, and the Seven Kingdoms will never be the same again!

The majority of the “Aquaman” #61 follows what is largely a ruse, the marriage of Vulko to the thought to be comatose Mera. But the issue quickly throws us into the deep end. Most of the seven kingdoms believe that the wedding is no more than a power grab, Vulko taking advantage of a situation to cement himself as a permanent ruler. But it’s more than that. The Seven Kingdoms are suffering from an unnamed disease and yet Atlantis, the scientific capital of the ocean is coming short of providing cures to their citizens and allies. Throughout the issue, there’s a slowly building narrative that, perhaps, the supremacy of Atlantis is beginning to slip a little bit. Yet, we see that Mera is still alive and that she seems to be planning something bigger with this wedding than simply revealing that she has been leading Atlantis from the shadows. There are moments where it becomes a little overwhelming. We see some big decisions from Mera. She disbands and arrests the Widowhood, starts changing Atlantian traditions about who is in charge of things like medical care and science, and at the climax, reveals the true purpose of her wedding, arguing that it is time to give power to the people. DeConnick’s Mera is tough and no-nonsense, making difficult decisions with confidence and proposing some truly revolutionary ideas. But what makes it work even better is the parallels Mera has with the story of Orm.

Where Mera struggles to get the support of her peers, Orm appears to be riding high on a combination of false populism and a cure for the ocean disease that seems to be impacting all the kingdoms indiscriminately. Orm is a wonderful villain to put at the forefront of “Aquaman” #61, and DeConnick clearly enjoys writing him. He is immensely charismatic, arriving at the wedding with a great level of pomp and circumstance. While Mera is purposing difficult ideas that will work well in the long term, Orm relies on quick fixes. It seems, though, that there is a level of his support that is genuine, positioning himself on one hand as a man of the people, who would literally give the cloak off of his back to one of the poor citizens of Dagon. But on the other hand, he is relying on coercion and fear. It’s easy to be popular if you control the only cure to a dangerous disease. But there is something magnetic about Orm. He commands a room, has a quick wit, and knows how to capitalize on distrust. At the climax of the issue, Orm is able to shift the radical ideas of Mera into fear. The queen has been driven mad in her coma, perhaps Atlantis is not the power of the ocean anymore. Orm is a fantastic foil.

DeConnick does a remarkable job of creating a slow burn to “Aquaman” #61. As the issue advances, it really feels like there’s a powder keg looming over the issue. Arthur and his companion discover a fleet of unknown ships, Vulko warns the doctor that her skills might be needed elsewhere. King Nereus warns his soldiers that while their initial greeting might be cordial, they are being monitored. The tension rises with every page and every panel and Miguel Mendonca takes advantage of the situation. One of the best sequences in the issue is when we see the rulers from the other Kingdom’s discussing the wedding. Mendonca does a great job of creating visually interesting characters for the various rulers. Nerus is pompous and above it all. The Brine Queen and her retinue are excited at the prospect of blood in the water. The wrights have a kind of adorable nervous energy, excited about the prospect of a wedding with combat. The Trench like good wine apparently. With this page, Mendonca is able to show the unspoken tension, the buildup to the chaos. The page is mirrored later by the various reactions of the kingdoms and the ensuing chaos. It’s all well done, but there is another thing about Mendonca’s art that also works really well, the ability to play with space.

Because “Aquaman” #61 takes place underwater, Mendonca is able to create some visually enthralling panels. This is best showcased in simple things, like Orm giving a speech to his rank and file troops. Being underwater means that the army can line up both vertically and horizontally, suggesting the size of Orm’s army. Being underwater means that characters can literally rise above one another during intense moments or conversations. Take, for instance, Mera’s confrontation with the Widowhood. As the tension builds, she begins to swim upward, putting her on the high ground. As her intensity rises, so does her physical command of the space. This gives a lot of room for Mendonca to play with space, which creates dynamic scenes of dialogue. It also gives all of the characters an otherworldliness. Mera looks ethereal as she studies books in her library or floats out to confront the other leaders of the ocean. The coloring also helps with setting the mood of various scenes. While everything sort of has a bluish overtone, this helps other colors pop, like Meera’s green wedding dress or the vibrant colors of the gate to Atlantis. Romulo Fajardo Jr. makes various parts of the ocean feel distinct. Most everything in Atlantis seems to have some level of artificial lighting whereas places along the ocean floor or outside of Atlantis are a little darker relying on more shadows.

Honestly, if there is one big problem with “Aquaman” #61 is that there is limited time with Arthur. What we get is good and it’s honestly lovely watching him observe Mera from afar, his eyes filled with love and admiration, but it would have been nice to see him get a little more to do. While “Aquaman” #61 ends with him springing into action, there could have been some more cutaways to him or some more about that he was up to. While it’s true that this was a very Mera focused issue, which sets up some big changes for the series, there could have been a little more Aquaman. Overall though, “Aquaman” #61 sets up some big changes as the ocean goes to war.

Final Verdict: 7.8 While “Aquaman” #61 can be a bit overwhelming at times, Kelly Sue DeConnick creates a compelling story about leadership and making difficult, but necessary, changes.