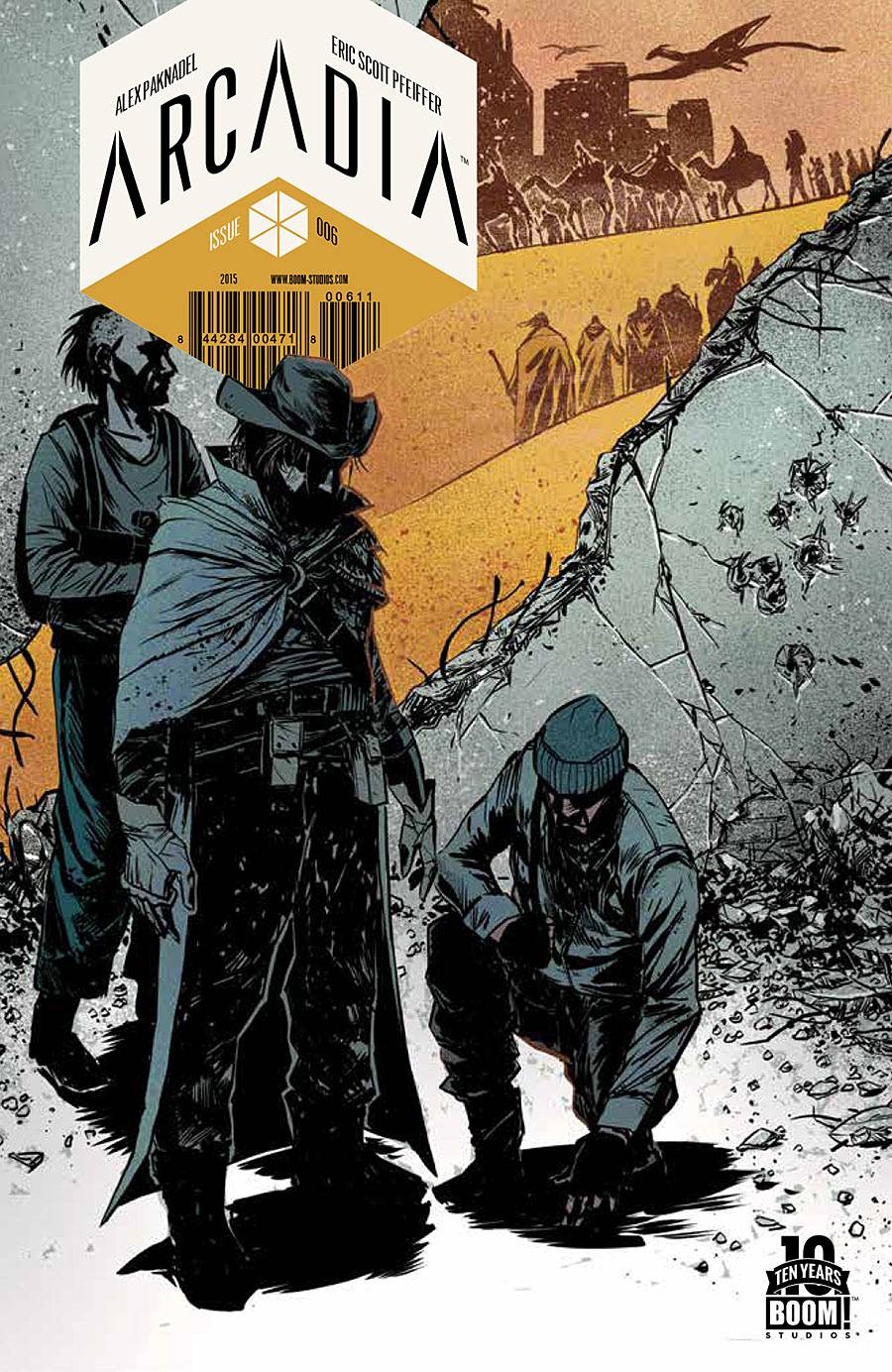 While this isn’t exactly Skynet, the technology is becoming self aware… 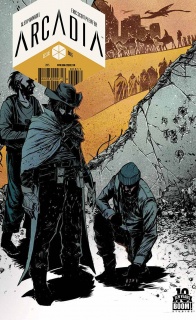 Lee Pepper is taken to a meeting led by the charismatic Uncle Cosmas, who promises the sickly crowd that he can upload them to Arcadia. In Arcadia, Coral teaches Giacomo to code by torchlight.

Outside of reviewing, my real day job is in technology. I work with complex systems and databases that essentially pay a majority of the American workforce. I would be lying if I said the pressure of that doesn’t get to me at times. If there is a bug in the software, my company and I have to address it as fast as possible. There is little room for error or time wasting, especially at this time of the year. While “Arcadia” doesn’t need to pay people, the fundamental idea is the same, fix any bugs in the system before it is too late.

To start, this issue answers the question from last month’s cliffhanger, did Jack survive? Yes he did and in turn it answered many questions about the Arcadia system that had been dangling since the beginning. The backstory of Arcadia is explained in great detail to why it was created. Like so many stories of technology gone awry, it begins with a man trying to fix his broken wife. While she is too far gone mentally, that does not mean that code bases cannot at least try to fix her. Of course, things do not go according to plan and this creates the virus inside Arcadia. Lee Pepper now is tasks with finding the main man in charge in Los Angeles, which is effectively a war zone of sorts.

Alex Paknadel uses this issue to dump a lot of information on the reader as the story draws to a close. The revelation of Arcadia’s virus being the original incarnation is a great twist to the story. While it was telegraphed a little bit, the execution here was well done. Paknadel doesn’t waste time in the explanation of this either. This occurs about midway through the issue, in the heat of a few tense moments. While all of this action is happening in the real world, inside Arcadia there is a similar event happening. It is an “art imitating life” side story that enhances the theme of virtual reality. Arcadia wasn’t designed to handle as many people as it has, it was meant to help one person. Ironically, Lee Pepper is the guy on the outside trying to save the entire world, virtual and human. As a tech guy, I love the idea of having the actions outside effect the inside and vice versa. It blurs the lines a little bit, to the point of not being sure what is going on. Wisely there are markers in the panels to tell the reader where this part of the story is happening.

The art also reflects this notion of dual worlds, almost to the same level. Eric Scott Pfeiffer has a very distinct style for both Arcadia and the real world. Arcadia tends to look a little bit cleaner, which is funny considering it is made of memories. The real world is a little darker and not as polished. Pfeiffer’s pencils (along with the colors) have a look as if the world is blurry, not coming clearly. To that point, fine detail isn’t always present nor does it need to be. Buildings and objects get lost in the shuffle which in a way makese sense, since this is a human story. Pfeiffer excels when he shows the different layers to Arcadia, allowing to show off different backgrounds. I was looking at it as a literal webpage in the book, navigating to different sub-pages and corners of the book. I do not think that was intentional, it is hard not to think of it with all the tech talk. While there might be some that are turned off by this, I can understand why you would be. The expectation of this pseudo sci-fi story is that the art will be bold and colorful. Instead, the apocalyptic Mad Max approach is taken, focusing more on the humans then the landscape. For that Pfeiffer does his job well, never really coloring outside the lines. The by the number execution isn’t spectacular, but it fits the mood of the story. I personally find that to be more impressive as opposed to shoehorning grand art for the sake of doing it.

The other big idea in the book is the idea of hope, both in the real world and Arcadia. While the characters are in a chaotic mess, they never lose sight of their missions. Pepper is trying to save the outside world and Jack is trying to save Arcadia. At the same time even the “villains” of the story are still trying to accomplish something of great benefit. Even with a virus killing the world on the outside, the goal of the people on the outside is to bring Arcadia to live. Inside, the people of Arcadia are hopefully to get out and go back to their lives before. The doom and gloom aspect of the story really does get pushed aside, which is very refreshing. The odds Pepper is up against never feel insurmountable, if anything they appear to be bothersome. I wouldn’t even call it idealistic, the outcome everyone is working for seems to be practical. They all know it will never be how it was before the virus hit, but being able to start fresh is an idea that works.

In a lot of ways, I looked at this as an allegory for the changing times in America. With progress, you have to look at the past through a filter. You do not want to ignore the bad stuff, but rather use it for a positive instead of a negative. “Arcadia” drives the point home with Pepper being the man for the job. His no-nonsense approach never comes off as grumpy, his commentary is simply to the point. He is likable because of that, even with his misgivings early in the story. Paknadel does attempt to make any grand statements with that, he sticks to the basics of human nature. “Arcadia” is one of those books that doesn’t need to grab your attention with flash, the book wants you to think. When I did, I found that density of this world is ripe for interpretation and exploration. The present in “Arcadia” might be bleak, but the future is very bright.

Final Verdict: 7.6 – A nice wrap of up of a few plot lines as the story nears the finish line.