In all stories, it’s imperative to stick the landing. A tale’s ending can make or break it. Some novels have fantastic twist endings. Some television shows have had crappy finales. People say it’s all about the journey…well, the destination’s pretty darn important too. “Archie 1941” #5 is the end of this mini-series. Does it stick the landing? Let’s find out. 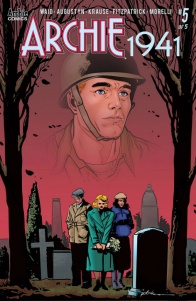 Written by Brian Augustyn & Mark Waid
Illustrated by Peter Krause
Lettered by Jack Morelli
Colored by Kelly Fitzpatrick
Archie Andrews—MIA and presumed dead! His friends and family—devastated! Don’t miss out on the conclusion of this headline-making comic event!

This issue opens with Riverdale gathering for Archie’s funeral. Supposedly, he died in battle, struck by a cannon shell. It seems the whole town is there, save for two glaring absences. Archie’s mother and girlfriend, Mary Andrews and Betty Cooper respectively, didn’t attend because they are convinced that Archie is still alive. Archie’s suffering father, Fred Andrews, gets into heated arguments with them both. Things reach a boiling point with Betty when Fred calls her crazy and she slaps him.

Across town, another argument is brewing between Veronica Lodge and her father, Hiram. Fans of “Archie” are probably familiar with this by now. Veronica accuses Hiram of only caring about money, as she’s done many times before. Veronica announces that she will take nursing classes and live with her mother, leaving Hiram Lodge all alone.

Betty goes to Pop’s, Jughead’s family now running the joint. Jughead basically reiterates what Fred told her, insisting that Archie is dead. Betty decides to leave the grieving town and heads to the train station where she’s met by a very alive Archie. Archie explains that Reggie died saving his life, pushing him to safety at the end of the last issue. Archie was deafened in his left ear and left with amnesia. Tunisian nomads hid him until his memory returned.

Archie reunites with his best pal Jughead and the whole town turns out again to give him a hero’s welcome. Fred surprises Archie with a new car and he takes it for a drive with Betty. The two lovebirds cruise through a happy Riverdale and off into the sunset.

I’ve been intrigued by the more dramatic elements present throughout the entire Archie 1941 mini-series. The writers really explored how war affects the community from different angles. Aimless young men like Archie Andrews feel compelled to join the good fight. Young men like Moose are heartbroken when they’re sidelined. Parents like Fred and Mary are worried sick over their sons, resenting each other and growing apart.

There was solid drama in this issue as well. Hiram is left alone with the money he put over everything else. The man did try to show his love for Veronica but sadly only knows how to throw money at problems until they go away. Mary refuses to let Fred honor Archie as a fallen soldier, clinging to hope that he is alive. One could see her point of view, can hardly blame her or Betty for their denial. You can’t really blame Fred for being more rational about the matter either. Betty insists that she loves Archie and would be able to tell if he was really dead…which is just so sad. The entire exchange is a compelling read.

The art is great too. Peter Krause’s style is a perfect fit for the World War II time period. Everything down to the hairstyles fits 1941. Krause can draw very expressive faces as well. The emotion on Mary’s face is heartwrenching, her grief perfectly clear. A subtle moment that I appreciated was Betty crying at the train station. The first panel shows her clearly but in the next, she turns her head and is shadowed before finally breaking down. The background in each panel gets darker as she gets more emotional. It’s really a great touch.

Now, does “Archie 1941” #5 stick the landing? In all honesty, I have mixed feelings. Don’t think I can say for sure. For one thing, Reggie Mantle’s death is completely glossed over. I know that he’s Riverdale’s resident jerk but he died a war hero just like everyone thought Archie had. He died saving Archie’s life. Flowers are left on Reggie’s grave and he’s mentioned in passing, but that’s it.

The issue glosses over Archie’s reunion with his parents too, which I believe was a big mistake. Fred and Mary have played a significant role throughout the mini-series, the audience has seen what a toll the absence of their only child has taken on them. All we see of their reunion is Mary smiling in the background at Archie’s party.

Then there’s the reveal that Archie is actually alive. It’s not exactly a big surprise. The ending undercuts some of the drama, the best aspect of the book. Like with superhero comics, it can be a bit difficult to invest in the characters’s pain when you know everything will turn out fine.

On the other hand, it sort of makes sense. Archie is the perfect everyman, Riverdale is the perfect town. Any darkness or gloom won’t stick. If it’s been this way since back when segregation was still legal, it stands to reason it won’t change soon. Cheesy as it is to literally drive into the sunset, it’s true to Archie’s brand. It may not be the ending I preferred, but I could just be overly cynical. Riverdale has taken it’s blows in “Archie 1941”, perhaps they have earned the happy ending. Ultimately, it’s up to you.

Final Verdict: 7.0 – For better or worse, everything is right in Riverdale.