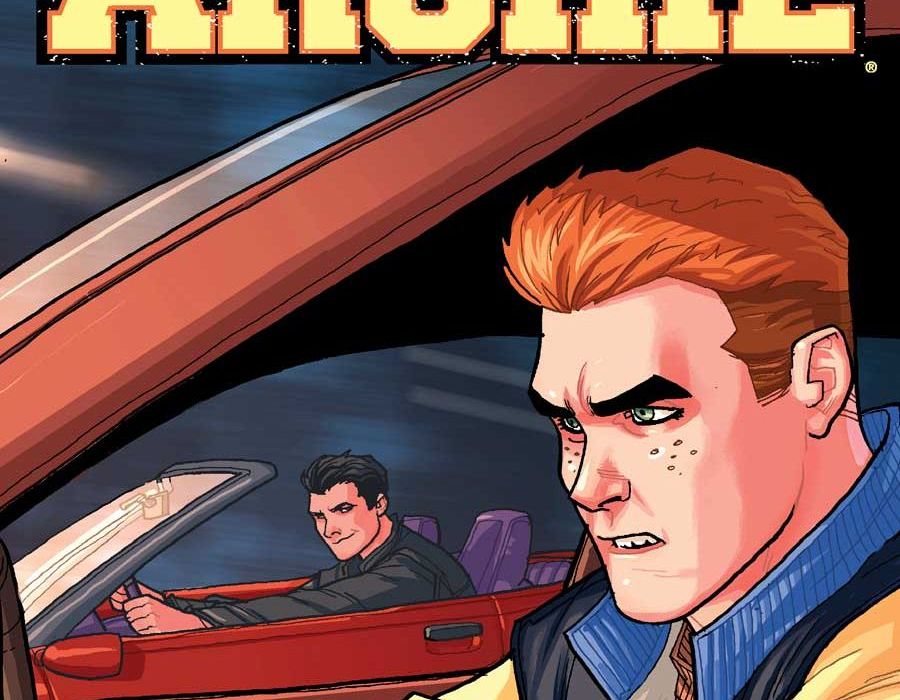 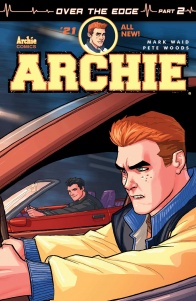 A phone call leaves everyone in Riverdale in a state of shock and despair!

Wow. Whatever your expectations were for “Archie” #21, Mark Waid, Pete Woods and the rest of their creative team almost certainly stood them on ear. You may love what they did, you may hate it, but don’t tell me you saw this coming, because it’s anything but predictable, boring or “safe.”

If you’ve had even a passing interest in the Riverdale Archieverse, you know that “Archie” #21 is the centerpiece of the earth shaking “Over the Edge” arc. It’s the issue where we find out – after a horrific three-car crash involving Archie, Reggie and Betty in the previous issue – exactly whose “life will be forever changed.” Arguably, this is the biggest event, the biggest reveal, ever in the history of “Archie” comics. Incredibly, after turning the last page and closing the book, it’s not the actual reveal that leaves your head spinning, it’s how we got there.

Things open on an utterly innocuous yet totally unpredictable note with a title that simply reads: “Jughead in ‘Food Dude.’”

To be honest, reading my electronic preview copy, I thought it was a mistake. Did I somehow start at the end, after the main comic ended? Is this some sort of “sneak peek” preview of something else entirely? What is going on here?

I feverishly scanned ahead. Nope. It’s not a mistake. That’s exactly the way it was written and designed. In fact, the entire issue is comprised of four separate, self-contained chapters that focus on four different sets of characters and four different plots. The one thing that unites them all? Each vignette ends with a phone call and a character rushing off. Isn’t that exactly how life works sometimes? Tragedy strikes out of nowhere, completely without warning, with no hints or foreshadowing or cheesy dramatic build up. It simply hits, a devastating body-blow that leaves you stunned and gasping for air.

It’s surprisingly powerful stuff. Especially for a hyped-up issue where the expectations were so incredibly high.

The genius is how Waid and Woods effortlessly weave together such unfussy comedic vignettes that riff on well established character traits and dynamics: Jughead is forced to work as a waiter at Pop’s to keep his line of credit open and the burgers flowing; Raj tries to shoot footage for his “Creature Feature” movie while being stalked through the halls of Riverdale High by Principal Weatherbee; Veronica plies her dad for a brand new, custom-made “Persian Indigo” Tesla; and Dilton invents a new gadget to help pulled-in-all-directions-at-once Betty study her textbooks subliminally while she’s also volunteering, delivering meals or reading to the blind. It’s utterly unpretentious stuff that could easily be featured in any one of hundreds of “Archie” books. But it’s not. This is the “Archie” event of the year, or the decade – or maybe ever.

Refreshingly, instead of some convoluted, high-concept issue full of glitz and sizzle that ultimately feels kind of hollow, we get a deep, immersive look at the Riverdale community and the characters whose lives will be forever affected by events well beyond their control. Indeed, Waid’s smart, sassy dialogue and Woods’ on-point illustrations detail the unassuming, yet almost idyllic “fabric of life” that will soon be torn asunder. It’s all so heartbreakingly simple and unadorned.

And it absolutely works.

Unsurprisingly, Mark Waid’s incredible writing drives it all. With subtle jokes and witticisms that make you want to nudge someone and say, “Hey, check this out,” he paints a wonderfully vivid picture of Riverdale’s unique and compelling characters. In fact, each character voice is so distinct, that even if this were a radio play, completely stripped of illustrations, you’d still know immediately who was speaking to whom and exactly what’s going on. There’s no superfluity here. It’s all 100% story.

In a similar way, Pete Woods’ masterful color work – like so many of the team’s other creative decisions – subtly shapes the action, tying certain characters together, while keeping others clearly separate. Jughead’s palette is all reds, pinks and warm colors; Raj’s is earthy blues and greens; Veronica’s, of course, is “Persian Indigo” and violet; and Archie’s is a desaturated “institutional green” that almost blends into the hospital walls. Notably, in a bit of foreshadowing, perhaps, it also stands in stark contrast to Veronica’s palette.

The exceptional use of sound effects, too, helps guide the reader’s attention and emotions. One minute, it’s the beastly, lumbering shuff, shuff, shuff of Principal Weatherbee’s footsteps as he searches for Raj and Sheila, the next it’s the kzztt of Dilton’s gadget, until finally it’s the shTONK of defibrillator paddles as [Read It for Yourself] cling’s to life.

Just like that, the issue ends, and who knows what will come next?

There are some very interesting clues sprinkled throughout this issue, but if “Archie” #22 is anything like this one, there’s no way to predict what will happen. And that is a beautiful thing.

Final Verdict: 9.5 Abandoned your preconceived notions and just dive in. With an unconventional structure and brilliant work by an exceptional creative team, “Archie” #21 delivers a spectacular issue that nobody could have seen coming.