Archie Andrews is an American icon. He’s been drinking milkshakes at Pop’s since before the moon landing. The redhead is popular with the ladies and with comic book writers. Mark Waid took over the reins but now Nick Spencer of Marvel fame wants his turn. 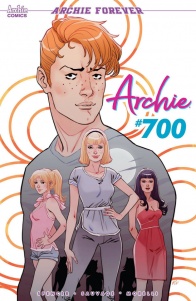 A brand new era of ARCHIE begins in this landmark 700th issue of our flagship series! Join the new creative team of writer Nick Spencer (The Amazing Spider-Man) and artist Marguerite Sauvage (DC’s Bombshells) as they take a trip to Riverdale and bring Archie, Betty & Veronica, Jughead, and the rest of the town along for a wild ride complete with new mysteries, new relationships, and much more!

I never really gave Archie much thought. I imagine I knew what most people do. The ginger kid is in a never-ending love triangle with the brunette and the blonde. His best friend is the town’s lovable goofball. His magazine, along with the crosswords, is probably by the cash register at your local supermarket. I probably still would be in the dark on Archie if not for the relaunch in 2015. “Archie” #1, as well as the other #1 titles, offered a fresh start and an ideal jumping-on point.

While the official numbering is “Archie” #700, this issue is basically another #1, again offering a fresh start and ideal jumping-on point. The writer, Nick Spencer, employs Jughead Jones as the narrator. Apparently, it’s the end of summer break. A lot of townspeople went away for vacation and are making their return. A good deal of the issue is devoted to reintroducing the cast and the setting of Riverdale to readers. Often, so much exposition can feel clunky or forced. Jughead’s new position as a writer for the Riverdale Gazette is a way to work around that. The framing device is an article he’s working on, so it all feels natural enough.

While Jughead spent his summer writing, Betty was volunteering, and Veronica was partying. All three have no idea what the titular Archie has been up to over the summer. After a lot of grilling from Jughead, Archie is still tight-lipped but vaguely implies that he went through something ominous. He wonders if he’ll fit in Riverdale anymore now that he might have been forever changed…which is laughable, frankly. When Betty reunites with Veronica and says that her summer changed her life, it’s just as funny. “Archie” has been around since the 1940s. It has gone through modernizations and changes here or there, but never strays too far.

Jughead assures his best friend that he hasn’t changed as they join everyone else at a party thrown by Cheryl Blossom headlined by Josie and the Pussycats. Archie reunites with Betty and Veronica, both girls attempting to rekindle their respective romances in their own way. Archie clumsily rebuffs both of their advances and runs off to reunite with his newest lady…Sabrina, the Teenage Witch. The issue is capped off with another mystery as Jughead arrives to find trouble afoot at the Gazette.

One of the aspects that makes Archie particularly interesting is the relationships. Archie Comics has published supernatural titles and crossovers with superheroes, but the main “Archie” book is more grounded. The friendship between Jughead and Archie is believable, and Spencer shows that Betty and Veronica are close friends despite the unspoken tension over Archie. The two ladies’ respective relationships with Archie come across as a bit more forced. They all but throw themselves at Archie and even fret over him, though his affections are clearly somewhere else.

It is interesting that Spencer would directly involve Sabrina in “Archie”. While the teenage witch is an Archie Comics property, she has always stood a bit apart from the rest of Riverdale. Sabrina is not a supporting character like Reggie Mantle or Moose, she is a main character in her own right as her multiple television shows can attest. Still, the third option for Archie, the option that is neither Betty or Veronica has been done before. Only time will tell where Spencer takes this.

The previous run by Mark Waid that kicked off this new continuity managed to be heartfelt and full of humor. One might expect Nick Spencer to continue onward in that direction. After all, his work has been heavy on comedy before to critical acclaim. “The Superior Foes of Spider-Man” and “Ant-Man” are good examples. However, this issue seems to move away from Waid’s depiction of Archie and towards the Riverdale depiction.

There are several similarities. Jughead is also a writer on the CW television show. Riverdale is idyllic on the surface but everyone seems to be keeping secrets. There is a definite emphasis on mystery in this issue. The crime on the final page and how Archie spent his summer may be the biggest mysteries but even Josie and the Pussycats are hiding something. Even the artwork seems to be, either consciously or subconsciously, evoking Riverdale. Archie is drawn less like the everyman he was before and more like a heartthrob, with piercing blue eyes, mussed hair and pouty expression. This decision would make sense, Riverdale is a very popular program and can be pretty entertaining. Young readers are probably more familiar with the show than the comic.

Otherwise, Sauvage’s art is very strong. She has a very distinctive style and can make everyday conversation a joy to look at. She is a good fit for this book and helps strengthen what seems to be shaping up to be an interesting title. Again, most of the comic is recap but I am excited to see where Spencer takes things once we get deep into the story.

Final Verdict: 6.0 – Spencer gets readers caught up so he can kick off mysteries in Riverdale.