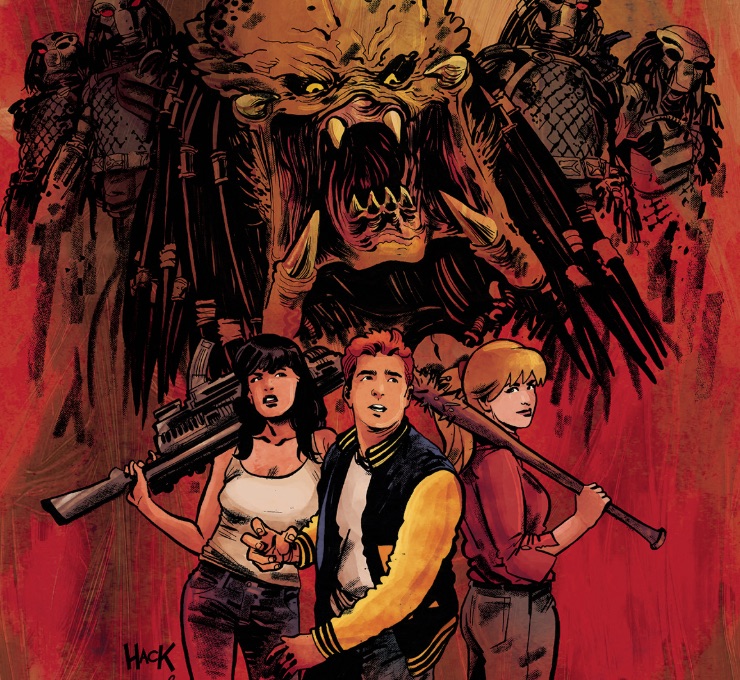 “Archie vs. Predator 2” #1 blessedly picks up where the last volume left off with an Archie-fied, lovesick, teenage predator, Betty’s questionable decisions and a whole lot of confusion for the trio. Warning: spoilers ahead. 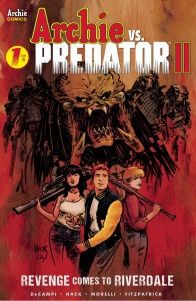 Written by Alex de Campi
Illustrated by Robert Hack
Colored by Kelly Fitzpatrick
Lettered by Jack Morelli Betty, Veronica, and Predator-Archie have been left in the wreckage of their town, all their friends dead. Normally, they’d just go down Memory Lane and get home again where everything’s okay, but that’s no longer an option. It isn’t until they find an undamaged car and drive it down a different road where they can finally return to Riverdale-but their hometown feels different. And it’s made even more bizarre when they come face-to-face with a few people they’d never expect: themselves. Only different, newer versions. Little do they know, Predators on Mars are watching them – planning their next attack.

“Archie vs. Predator 2” #1 doesn’t waste too much time with exposition. Betty, Veronica and the hormonal Predator are the last people alive in Riverdale, and try as they might, they can’t leave. Memory Lane’s blocked off, and every time they try to drive away, here they are. In the meantime, Predator!Archie’s family seems to be keen on coming to look for him, and there’s that whole alternate reality thing the gang has just stumbled into. Dilton’s really done it this time.

Assuming we’ve read the previous volume, De Campi and Hack plunge us into the next installment with the right balance of cheesy teenage dialogue and Archie-style gags that characterize the original comics. De Campi has a firm command of the source material and knows how to translate the rapid-fire emotional beats of old school Archie into the modern day. The high notes are fewer in this first issue, which is a welcome reprieve from balancing the huge, constantly quipping cast of the previous volume, but this mood shouldn’t really last too long before we’re back to some absurdity. The scenes between Betty and Dilton are a nice balance, and help get at the zanier tone that we’ve come to expect from this series.

Hack’s style is an adjustment from Fernando Ruiz’s pencils in the previous volume, but in line with some of the more serious books that have come out featuring the Riverdale crew since 2015. Choosing a more realistic art style is a bit of a shift, considering it’s a continuation of the same storyline, but isn’t necessarily a bad choice. Coupled with De Campi’s writing, this first issue may also signal a tonal shift in the book, but hopefully not too far from our surreal origin point. We’re still dealing with a lovelorn Predator, after all, no matter how many spines were ripped out in the previous installments. Some of the rough ink details don’t entirely play when it comes to the characters, though they’re clearer in the panels with simpler backgrounds. We lose some clarity and detail in panels with multiple characters, though the style works to add menace to the Predator. Predators, as it turns out.

There are a few places where we do get overly serious, however, and one of them in particular is this issue’s 9-panel grid. Focusing in on Veronica in a confined space requires a certain level of visual consistency that’s lacking, as this panel structure is often used to extend or deepen a significant moment and bring all focus to bear on the nuance in facial expressions, locale, et cetera. Hack struggles with facial clarity in a few places on this page and in other spots, as some of the moodier or minimal lines distort. As she turns her head and retreats further into shadow, it’s a stretch to believe it’s the same person talking. Add this to the heavy dialogue, which is very out of character considering the first volume, and the moment simply does not play. De Campi could be trying for a shift here, as mentioned above, but a lyrical Veronica Lodge at this time doesn’t quite work. A different page structure, perhaps with wider panels to show everyone in the car, could’ve made this scene quieter and perhaps even more significant in its simplicity.

Fitzpatrick chooses subdued hues for the blasted landscape Riverdale’s become, and adds some nice pops in single-color backgrounds to hint at the gang’s previously bright world. As stated, these also help clarify some of Hack’s detailing and streamline the storytelling. They’re also subtle emotional touchstones in a story that is, despite its apocalyptic doom and gloom, about a bunch of teenagers. Though we have more realistic art and a blasted landscape to reckon with, there are still youthful moments and a few comedy pops that shine out because of Fitzpatrick’s careful work.

Morelli’s lettering is also a departure from the classic Archie style, but not necessarily by much. There’s still a hint of those lovely slanted block letters, and Archie!Predator’s emoji dialogue is still very good, and Morelli dulls the crispness of the digital symbols so they blend pretty well with Hack’s looser line. This choice by the creative team was a topical gamble, as slang and of-the-moment speech often fall very flat in comics, but it paid off in its absurdity in the first volume and seems to be a necessary bit of levity in a more dire Riverdale. There is a slight inconsistency in balloon style, with a few rounded corners later in the book that don’t match the thin ovals or bubblier balloons elsewhere, but there’s also a good amount of detail on the page that might require more creative placement and variation.

“Archie vs. Predator 2” #1 is initially more serious than its predecessor and has a few art issues, but it’s ultimately successful in drawing our interest into another story arc. De Campi and the team up the ante with an invasion, and still have an eye on the humor that made the first book a success.

Final Verdict: 7.0 – “Archie vs. Predator 2” #1 turns the volume down on the absurdity and has a few art issues, but achieves its goal of opening what should be an entertaining second arc.