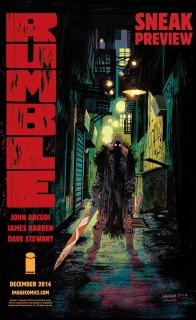 As a devotee of the Mignolaverse, I know that the names James Harren and John Arcudi are synonymous with bold comic creation. “Rumble” is their first creator owned work together, and we have a spoiler-free review of the first issue.

Co-creators John Arcudi (writer of BPRD, Savage Wolverine, A god Somewhere and the Eisner nominated The Creep) and comics rock-star James Harren (Artist on Conan, BPRD, and cover artist for the Hawkeye vs. Deadpool mini series) have come together on a project that is both quite literally of epic proportions and completely “street-level-human” in its themes in RUMBLE. Both bizarre as hell and familiar as life, the new ongoing series comes to Image Comics in December of 2014.

And RUMBLE is a strange book, that’s for sure—like a scarecrow-Conan fighting in a Louis C.K. TV show directed by David Fincher—with a supporting cast of odd characters, many of whom aren’t even human.

RUMBLE is a bizarre action/adventure urban-fantasy horror story—with a dash of humor at times. Coming to Image Comics this December.

In a lot of ways, the first issue of “Rumble” reminds me of the first issue of “East of West” – both series created an instantly identifiable world, crafted by partners who have had the reigns of a shared universe taken off of them, exploring an idea that is so perfectly theirs. This is the sound of Arcudi and Harren exhaling, letting loose a strong gust of creativity.

The issue spends its first few pages showing us some very particular images: a jagged cliff, a toppled Paul Bunyan statue, a dog pissing on the sidewalk. None of these images taken alone are all that unusual, but all have a quiet discomfort to them. The page dedicated to Paul Bunyan Land has an eerie, post-apocalyptic feel, but it could also just be an abandoned theme park. The jagged mountain looks ominous, but more because of the man climbing it than anything about the actual topography.

That sense of unease and potential dread is present in every inch of this comic – even scenes that should feel normal, like a man having a beer at a bar, are undercut by the surroundings. The dive bar is like every one you’ve ever been in – dart board, tie dance floor that hasn’t been danced on in a decade, video poker machine, smoke ventilation system – but it is empty except for the bartender and one patron. That patron has some mileage on him, and looks off, in ways that are hard to describe exactly. But again, there is that dread that is hanging over the entire issue like a fog. At times, the fog appears to be choking the action, taking your attention away from what is actually being seen, and instead pulling everything out of the reality and into this perceived reality, where nothing can be trusted or believed.

The story is relatively simple: Bobby is a bartender at the aforementioned dive bar, and one of his customers, Mr. Cogan, brings trouble into the bar that sends Bobby out into the world, wielding a huge sword, looking for answers. We meet Bobby’s friend Del, via a single panel (featuring, perhaps, the greatest tattoo ever imagined), various supernatural creates, and some colorful denizens of this world. Not every piece of the puzzle reveals exactly how it fits into the whole just yet, and that’s ok – each page brings a new revelation, a new clue, a new idea, as to what sort of a world in which the story takes place.

One of the really enjoyable parts of this comic is that it doesn’t fall into the typical #1 roles – very few names are used, very little context is provided for anything, and there is no exposition whatsoever, aside from one line about there being a war at some point in the past – “the biggest ever.” Everything we see sets the tone for the series, but instead of doing that with words, it is done through Harren’s atmospheric pencils and Dave Stewart’s hazy colors. Palette-wise, this feels more like “Southern Bastards” than anything else Stewart has done recently. That book, also, has the feel of the other shoe about to drop, which is why it feels a bit like the sister book to “Rumble.”

“Southern Bastards” is a good reference point for another reason – both books have creators that seem to have a sixth sense, or at the very least an artistic shorthand with one another. Harren and Arcudi have done a number of “B.P.R.D.” arcs together, and clearly have a lot of respect for the other’s talents. Arcudi is an absolute master of world-building, and over the course of this issue, his script peppers in any number of clues to how this place operates, without ever coming out and saying “this is what’s happening!”

Harren’s style also helps obscure the world a bit, while building upon each little clue or hint included in Arcudi’s script. My favorite moments from Harren are the ones right before the shit hits the fan (although, to be fair, no one shows the fanblade of the world carving up the shit of one’s life quite like Harren does). Everyone appears to be napping (in some cases, literally) before their world starts to fall apart at the seams. When the action happens, it happens in blur of emotion and movement, much like how it would happen if we were actually in a bar when a bloody stump ran in, being chased by a scarecrow. It is in the other moments, like when Mister Bildad (a cat) falls out of the window, or when an asshole cop thinks Bobby is crazy, that Harren is able to imbue in his characters such deep-seeded emotion that you instantly know a good chunk of their lives – the cop is exhausted by the nuts he encounters, the cat lady is lonely – and that makes every scene feel as lived in and real as any hundredth issue, let alone a first.

The book was sold, both in solicitation and in interviews, as having a Louis C.K. type feel – while I don’t really see that just yet, it does have a touch of the absurd and is commenting on the world in a very specific way. I really enjoy the way the book isn’t attempting, at least not yet, to tell the story of how the world got like this – it simply is like this, and that’s that. It is not dissimilar to The Leftovers in how it doesn’t deal with the question of ‘why,’ but rather of ‘what now?’

There is still a healthy sense of mystery to this world, but there is nothing confusing or unclear about what we see happening – sure, we don’t know why there are (seemingly) demons and the supernatural present, but no one else does either. Everyone in the book seems to approach the world with a certain sense of skepticism or defeatism; there is no certainty anywhere here (except that Mr. Cogan’s tab hasn’t been paid in a very long time). After reading the issue a few times, all I’m certain of is that I want to read more.

Final Verdict: 8.8 – A strong start to a fascinating story.