“Army of Darkness Bubba Ho-Tep” #3 demonstrates that there’s more than one kind of mile-high club. Hail to the King, baby. Warning: spoilers ahead. 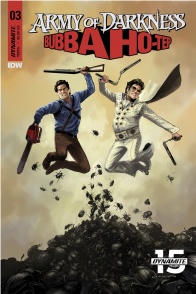 Cover by Diego Galindo
Written by Scott Duvall
Illustrated by Vincenzo Federici
Colored by Michele Monte
Lettered by Taylor Esposito
Having just scored a victory against the nefarious Bubba Ho-Tep, our heroes Ash and 70’s-era Elvis take to the skies in the King’s private jet, escorting the powerfully destructive Necronomicon Ho-Tep. In order to keep it out of the wrong hands, they must provide the Egyptian artifact safe passage back to Elvis’ secure fortress in Graceland. But even at 20,000 feet, evil lurks closer than they realize…as do giant scarabs! It’s the penultimate chapter of the year’s most groovy crossover event!

“Army of Darkness Bubba Ho-Tep” #3 is the third enjoyable installment in Ash and Elvis’s adventures. Who doesn’t want to fight a couple of undead mummies while high on an airplane? With Elvis?

Issue #3 opens with Ash taking a trip to the little boy’s room, only to find that he and Elvis might have to kick some undead butt in the unfriendly skies. The issue ends with the plane crashing directly into Graceland in a riot of color, action and pure fun. Duvall has a good understanding of both pieces of source material in this mini, and there are quite a few in-jokes that reward fans and will still delight newcomers. There’s also a nice nod to the “Bubba Ho-Tep and the Cosmic Blood-Suckers” mini that ended earlier this year in the first Elvis POV we see in the series thus far. Raimi’s work skirts the edges of madness, and Duvall understands that the action needs to be quick but the stakes always need to be as high. Similarly, we don’t suffer from a dearth of schlock, and there’s not a hint of overly serious dialogue or pretentiousness in this book. “Army of Darkness Bubba Ho-Tep” is exactly what it sets out to be: a good time.

Federici’s art is enjoyable, with a lot of good cartoon details that give way to finer linework and moments of seriousness when they need to. Bruce Campbell’s face is basically a cartoon made flesh, with a good dose of classic Hollywood handsomeness thrown in, and Federici captures the famous chin and Campbelll’s rubber-face reactions quite well. In Ash’s internal rundown of his franchise’s history, Federici gives him some of that dashing, dreamboat charm that makes the character so compelling – especially when he’s getting the crap beat out of him a few seconds later. Ash never quite can follow through on those one-liners before getting owned, and Federici and Duvall lean into that with gusto. Similarly, Federici pulls back on the sensationalism of the bloated Elvis of latter years and gives him a modicum of that cool charisma that had America swooning over him in his heyday. There are some delightful ‘70s wardrobe choices, but the King is still a few years away from dying on the throne, and it’s the right level of interest and humor when he explodes into action.

The entire issue takes place on a plane and animating a confined space while Elvis is kung-fu kicking a mummy in the teeth can be difficult, but Federici plays with inset panels and a lot of loopy background details to pump up Ash’s drug-addled perception and give us consistent visual interest. The action lines are bold and suit the comic’s tone very well, and the mummies are suitably gross and comical at the same time. There’s also a nice little inset reveal shot of the zombie pilot that features some photo collaging and adds to the book’s surreal mood.

Monte’s colors are what make this comic really come to life. Federici has some great cartooning throughout, butt the color palette is, well. Groovy. Garish. Very Vegas. Neons and drug-hazed colors make Ash’s under-the-influence POV pop and echo into Elvis’s with some nice complementary hues. The greens and claustrophobic light sources help amp up the sinister aspects of the chin duo’s undead foes. Ash’s montage is a day-glo carnival smashed into a Lichtenstein painting, and even Elvis’s “Sweet Priscilla!” gets the same treatment. Monte also elevates Federici’s background choices with some great color pops and some all-white backgrounds that actually work in those high-spot action moments. Monte’s work is fun, and she knows how to pump up the drama in a scene without letting us forget just how hard we’re supposed to be laughing.

Esposito’s work is top-notch, as usual, with some awesome sequin styling on the King’s narrative balloons and a lot of splashy sound effects during the aerial battle. The entire issue is a punch-up but there’s no shortage of dialogue to content with, so Esposito’s style and imagination come into play with disgusting sounds and some cute translations of what those saucy mummies are actually saying. Esposito chooses a straight-ahead font that doesn’t detract from the zaniness on the page and shows his customary flair with swoop-y, outlined effects. The horror anthology-style font on the end splash is particularly satisfying as well, and the chainsaw balloon that featured in earlier issues should be called out in particular for its on-the-nose charm. Esposito knows how to have fun with his work without sacrificing an iota of readability, and that’s why he’s one of the best working right now.

We come back to these franchises whenever we see them because they’re good, schlocky fun without sacrificing intelligence or their horror roots to get there. I don’t care how old I get – I’ll always pick up a book featuring Elvis kung-fu kicking the undead. That said, it can be difficult to strike the right balance between humor and sleaze, and Duvall, Federici and the team are nearly pitch-perfect.

Final Verdict: 8.0 – “Army of Darkness Bubba Ho-Tep” #3 is an enjoyable entry into this fun and cheesy mini, with expressive art, explosive colors and raucously fun lettering.