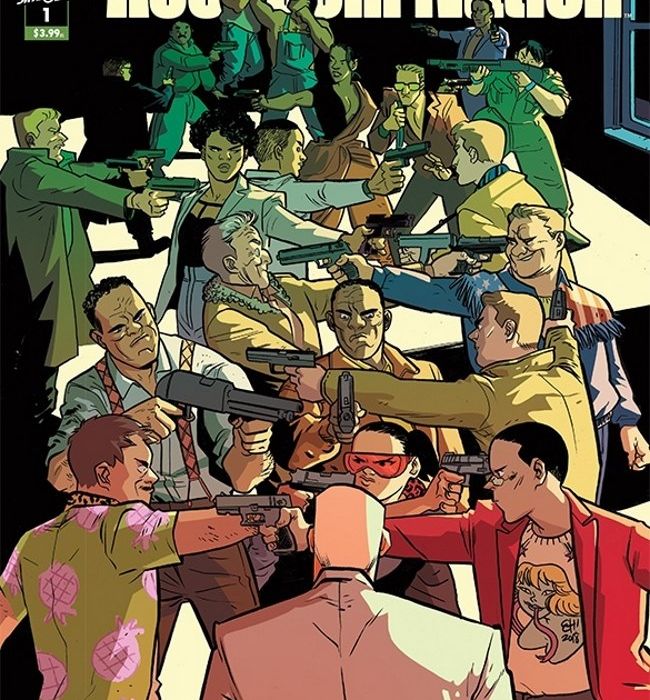 Kyle Starks has managed to do what indie writers have dreamt of for years now: talk artist Erica Henderson into co-creating an original series. Fresh off her acclaimed stint on “The Unbeatable Squirrel Girl”, Henderson joins Starks in crafting a brand new world about assassins competing against each other on a competitive ladder. Will Starks’ trademark humor infused with Henderson’s super electrifying art combine to make something undreamed of? 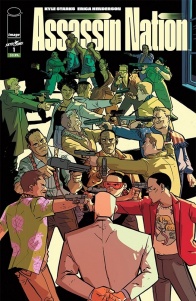 Hot off her breakout success at Marvel, two-time Eisner award winner ERICA HENDERSON (The Unbeatable Squirrel Girl, Jughead) teams up with KYLE STARKS (writer of sales beast Rick and Morty) for a hilarious twist on the hitman trope that will have readers laughing in the aisles over ASSASSIN NATION. The World’s Former Greatest Hitman hires the 20 best assassins in the world to be his bodyguards. These mean-as-hell hired guns and murderers must work together to keep the new crime boss safe while attempting to solve the mystery of who’s trying to off him. With the same laugh-until-you-cry spirit of action-comedies like Hot Fuzz, Tropic Thunder, and Deadpool, ASSASSIN NATION is the bombastic, side-splitting murder-fest you’ve been waiting for.

“Assassin Nation” #1 handles a cast of over twenty unique and individual characters. In the hands of any other writer, this would be a precarious march into a cluttered issue, but Starks uses his quick wit and superb characterizations to make each of them interesting, yet never feel like they’ve outstayed their welcome. Starks provides a handy chart of each assassin and their ranking, so you can never forget your favorite. From there, Starks drops us into a room full of said assassins, each mingling with each other and catching up for the first time in years. What better way to have them connect with readers? Soon after, a chaotic battle ensues, ending up with Starks swiftly killing off more than half of the original cast, regardless of how well you bonded with them. Somehow bonded with Tanaka, the snarky, shades-sporting enigma? Fell for Fernando’s classic stereotyped charm? Too bad for you, as they didn’t survive Starks’ vicious cullings. It’s hilarious, engaging, and a quick and efficient way of showing readers who is important and who is influential in this series.

Above this chaotic mess of death and suspicion stand two central pivotal characters: Chekhov’s Gun and Maxwell Bishop. Chekhov’s Gun, the former top assassin and self-proclaimed “best hitman in the world”. He’s interesting as someone who relishes being away from the top now, and as someone who’s hired the top twenty to protect him from an unknown threat. Starks keeps his true motives other than survival unclear – he’s definitely not noble, he’s misogynistic and boisterous, and he’s generally hated by most of the top twenty, and yet he has an undeniable charisma in always pushing to get what he wants. Maxwell Bishop, on the other hand, works as a complete contrast. He’s retired from being the world’s top assassin, having stolen it from Chekhov’s Gun, and appears to be working on a path for redemption. His only foot in the door is to find his husband’s killer, making him the most relatable and empathetic of all the characters. And yet, he still takes part in the violence, and he still seems to go along with Chekhov’s Gun’s offer. It shows us that as selfless as he may seem, there’s an unresolved part of him that enjoys the good old days, making him simultaneously more human than the rest of the assassins and still just as twisted.

As previously stated, this is Erica Henderson’s first major work indie work after her Marvel stint, and as co-creator and artist, we really see her stretch her legs. The most obvious work to look at is character design. In a book opening up with a cast of twenty-plus characters, it would be easy to have each one look, behave and feel at least somewhat similar, especially considering the inevitable deaths of most of them. Henderson, however, gives a unique visual identity to each one. The (arguably) main characters, Chekhov’s Gun and Maxwell Bishop, might be the most straight forward characters, dressed simply in a grey suit and bomber jacket/pants combo respectively. Then we get into the second tiers like Fuck Tarkington, a character who oozes charm and charisma with his ’50s gentleman mustache and jaw contrasted with his one-piece denim overalls. Even better, the profoundly-named David Bowie Knife looks greasy as heck but super fun. He sports a hairstyle that resembles an unkempt version of the Thin White Duke’s himself, massive yellow-tinted aviators, and wields (naturally) a bowie knife. The detail doesn’t end with these two, showing the level of craftsmanship that Henderson has put into this issue with the characters alone.

Henderson’s work here has a level of pacing control that can pull you into a singular, explosive moment before immediately thrusting you back into civility with relative ease. We get a compressed version of this in the opening sequence. Chekhov’s Gun is calmly interrogating a kid for the first two pages of the issue, feeling reminiscent of texts like the opening of Pulp Fiction. And in a similar vein, the very next page we see Chekhov’s Gun snap into a rage followed immediately by a gunshot through the window with the survivors then scrambling to escape. To top it all off, the very next pages climaxes the action with a two-page spread of the survivors recoiling from a tumbling, exploding car. And the very next page? Without warning or any transitionary hints, we’re in a quiet room, with Maxwell Bishop looking suspicious at a piece of art. This formula is then expanded upon to greater effect with the planned assassination gathering of Chekhov’s gun. It’s exciting to feel how Henderson can so expertly guide us through the book at her own pace.

“Assassin Nation” #1 sports a vibrant, candy-colored palette that supports its anything-goes tone. Henderson keeps this neon intensity sizzling under wraps for the most part, while the narrative takes a slower pace. We see backdrops of color reflect the mood of the panel, with moments like Chekhov’s Gun smooth talking to Maxwell taking place on a cool-blue, and Maxwell’s reveal that he’s trying to find his husband’s murderer sitting on a sea of painful red. The colors throughout the briefing and socializing become more pastel, appropriately suiting the nostalgic reminiscing of each guests reuniting with an old friend. Once the battle starts, however, Henderson kicks the palettes into high gear. Action can take place on a sheer white backdrop, while the characters themselves have a hazy, yellow/orange glow about them, or we watch a small eight-panel sequence of the delightful Dave surviving a bullet shot, with each panel spotlighted by a different, super saturated color backdrop. It’s unashamedly bright coloring and it’s endlessly fun to look at.

Starks and Henderson prove themselves a rollicking, manic tour-de-force with “Assassination Nation” #1. The attention to detail within the expansive character cast, both visually and narratively, is astounding. The pace and flow of the issue is masterfully controlled, leaving you gasping for breath but asking for more. This is a debut from a pair of creators each at the tops of their games.

Final Score: 9.2 – With excellent character work and visual pacing, “Assassin Nation” #1 is the work of two creators firing on all cylinders.