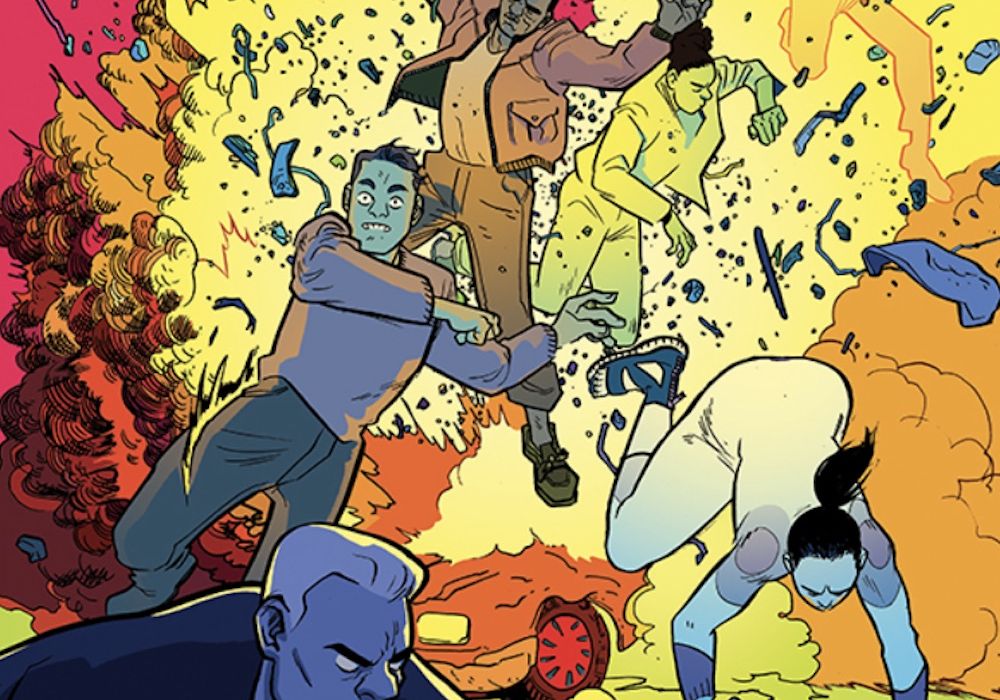 “Assassin Nation” #2 keeps up the book’s fun pace, with and explosive action, and even throws in some serious notes to ground the book’s grim humor. Warning: spoilers ahead! 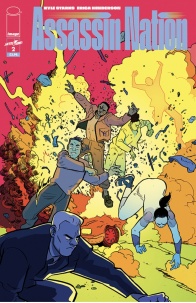 Cover by Erica Henderson
Written by Kyle Starks
Illustrated by Erica Henderson
Lettered by Deron Bennett
Someone’s trying to kill Boss Rankin! After the shoot-out in his loft, the remaining assassins have accepted his offer to be his private security force. There’s no way anyone tries to knock him off now, is there? There is?! Are more people going to die? Probably!

Starks and Henderson have put together a fine book about a bunch of weirdos who kill people for a living. There might not be any higher compliment to pay “Assassin Nation” than that because the duo are demonstrating some keen knowledge about what makes a good ensemble comic, a good action comic, a good murder mystery and a good dark humor book all at once. Everything we need to enjoy ourselves and reflect a little on the ultra-violence of it all is here, so dig in.

Starks knows how to put an effective comic issue together and throw in some good dialogue. Issue #2 opens with over half the Top 20 assassins dead and a dual mystery on our hands: who’s trying to kill Rankin, and who killed Bishop’s husband? After the carnage of the last issue, we’re left with the following motley crew: Taipan, Chad Fingerman, Smoke, Wistful Stan, Connie the Tank, the Mamba Twins, Dave and the aptly named Fuck Tarkington. Rankin continues to be his mouth-breathing, invasive self and is the perfect parody of the slick, elite, is-he-or-isn’t-he-actually-a-bad-guy dude. We get some insight into some of the assassins’s backgrounds in concise montages, some good tension built through squabbling and a big action pop at the end of the issue. Bishop has a lot of sympathy, and Smoke’s reaction to Fingerman’s attitude problem is a great scene that speaks both to her youth and her maturity in her current profession. She’s had to grow up fast, as we’ve learned, and Starks puts just the right amount of detail on the page to carry her and the other assassins’s characters.

Henderson’s art is extremely expressive and apt for this kind of comic, because we’re relying on a lot of character interaction and physical details and quirks to carry the story. Each character has distinct costume choices, mannerisms and facial expressions that say a lot about who they are, and this level of detail pays nice homage to the cool ensemble action movies we all know and (some of us, self included) love. Henderson’s colors are fun, bright and expressive, with a lot of pinks, oranges and yellows to highlight single panels and a nice fuschia palette for Wistful Stan’s montage. The single color backgrounds work well because they’re integrated into the overall palette, as with the gradient in Dave’s flashback, and they help carry tension as Fingerman loses his temper. They’re also key to visual interest when the bulk of the issue involves several characters sitting around a table talking. The moody blues and blacks in the exterior scene help provide a moment of calm before all hell breaks loose, and Henderson doesn’t skimp on the oranges, yellows and reds to make the death scene that follows worthy of a significant amount of real estate on the page.

Henderson doesn’t generally stray from a straight-ahead layout, but the way she structures the pages in the flashback scenes and the fun, splashy explosions later in the issue takes a lot of skill. There’s a nice callback to the origin story vignettes later on in the issue as we learn about Wistful Stan’s origin right before he eats it, and the glee Henderson imbues the forlorn character with as we see how he first dallies with and then kills his female target contrasts sharply with his hangdog face pre-drone death. It’s an effective sequence, and Henderson follows that up with a fun explosion, complete with a big sound effect to carry off the chaos. Darker panels are often followed by borderless vignettes, which adds balance to the page and helps us laser in on character reactions, and pause when needed to absorb what’s happened in the story thus far.

Bennett’s lettering is deceptively simple, with some nice drawn balloons with gently rounded corners, and a font that’s straight ahead enough to make the dialogue from Starks and Henderson’s large cast flow. Henderson adds in some hand-drawn sound effects into the art, and it’s difficult to tell if Bennett is responsible for any on the page – a good sign, given how difficult it can be to integrate sound effects over detailed art. Balloon tails are squat and economical with minimal styling. White balloons pop on the page, but don’t overpower the varied palette, and Bennett’s instinct toward simplicity serves “Assassin Nation” well.

Overall, “Assassin Nation” #2 is a fine issue that deepens the mystery Starks and Henderson set up in issue #1, with enough character development and explosive action to keep us entertained. The end of this issue isn’t exactly a revelation, but Smoke’s proposition means we’ll get to see each of the surviving assassins in action very shortly. Starks and Henderson are proving that they can put all of the ingredients into a successful action comic, from profanity to humor to heartbreak, and “Assassin Nation” is well worth a read.

Final Verdict: 7.5 – “Assassin Nation” #2 delights with more of the cool character details and engaging art that grabbed our attention in the action-packed first issue.