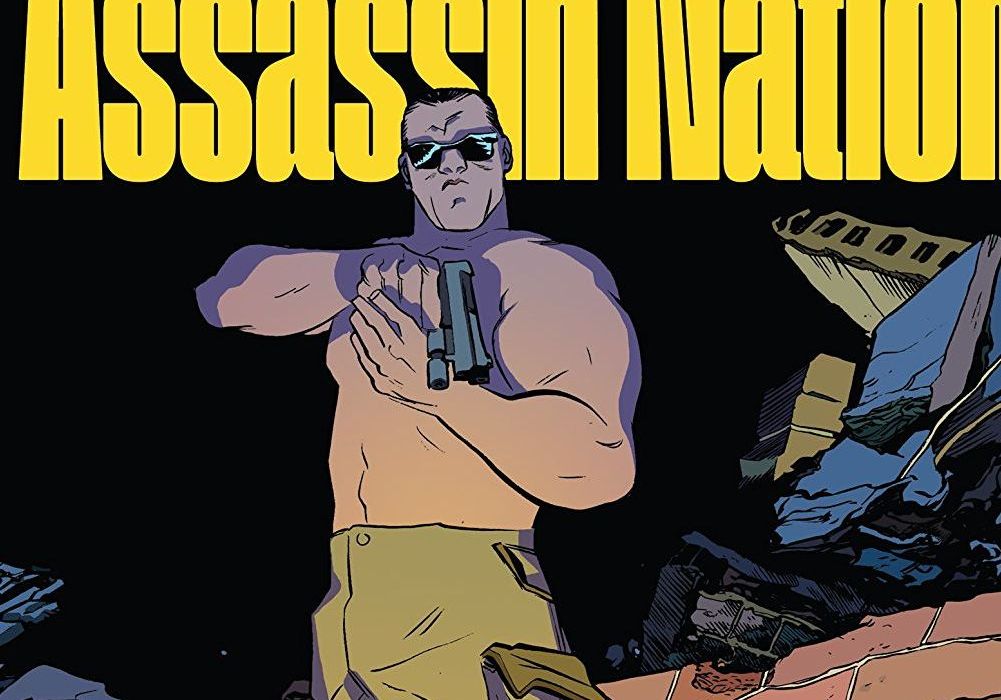 Like misbehaving Muppets and depraved children’s cartoons, there’s something strange to be said of seeing Erica Henderson draw foul-mouthed murderers. Henderson has been a big presence in my comics experience ever since she was doing work for the now-defunct Comics Alliance, but she really came to prominence with the wonderful all-ages “Unbeatable Squirrel Girl.” So when you see her work on “Assassin Nation,” it’s shocking. And the book itself earns that shock, in a big way. 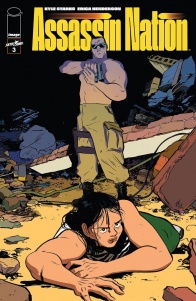 Our surviving hitmen go into full-on kill mode as they try to take down the leader of the Merda Morra gang and maybe finally put this whole thing to bed. Though, you know, it IS a whole gang they’ll have to fight, and they WILL have to take down current No. 1 hitman Taipan to get the job done. Want to take bets on how many get out of this issue alive?

Honestly, this book is worth the price of admission for Henderson’s work alone. She’s always great, but here she’s taking her work to a new level in terms of design, aggressive motion, and popping colors. But “Assassin Nation” is more than a book of cool images; it’s got writing of… a certain quality. That’s because Kyle Starks writes like he’s an entire writer’s room. The jokes are quick, polished, and feel like they’ve been processed through dozens of drafts. Rather than an easy improvisational style like you’d find in It’s Always Sunny in Philadelphia, his script has the hilarious nastiness of an episode of Veep. Every scene of the ensemble sitting around is as hilarious as it is downright mean.

This is more than a simple action/comedy series though. There’s an attention to design in not just the characters (though them too!) but to the book itself, as is best exemplified from the assassin rankings at the start of every issue. These rankings are a masterful use of visual storytelling. They set the tone and the stakes. These are individuals with silly names, and silly gimmicks, and they can be definitively ranked with statistics. There can only be one assassin at the top, and they all want to win. From page one, “Assassin Nation” tells you what it’s about and sets a tone better than most comics do in their first arc.

In a book about assassins, you’re going to want to have some zany, high stakes action. That’s probably a big part of the reason Henderson signed onto this book. You can tell she’s having the time of her life. And there’s no way to talk about the high quality comic book storytelling without mentioning Henderson’s colors and the stellar work of letterer Deron Bennett. Sound effects sometimes seem like a dying art, but every so often there’s a series that confidently reminds us why SFX have been a part of comics for so long. Bennett uses the big bubble letters for more than a good onomatopoeia, he takes a page out of “Incredible Hercules” and just narrates through the exploding letters (“FUCK YEAH”).

The color work is also stunning. I spent the issue wondering who did the color work, only to discover it was Henderson herself. This was totally shocking. These aren’t well integrated colors, they’re jarring. They call attention to themselves. They look like the work of a separate creator. It’s cool that Henderson can split her focus and highlight a bullet impact with a splash of fuchsia.

But where “Assassin Nation” comes together is in the characters. Art, colors, writing, lettering; this is a character driven book. The ensemble is fabulous, from the slimy Chad Fingerman to ingenue assassin Smoke, the eager Mamba Twin, unremarkable Dave and of course, the legendary Fuck Tarkington who steals the show with his almost childlike wonder in the face of all that murder.

Of course, with such a high mortality rate, it’s a little hard to commit to loving these characters. You’re keenly away that they can be taken away from you at any moment. It’s a strength of the book’s unpredictability, but in doing so, the story needs to sacrifice a bit of its emotional center. It keeps the book shocking and frequently hilarious, but it’s really a double edged sword. That’s something that can be lessened on a repeat reading, while the jokes are sharp as ever.

As the middle entry in this story arc, you’d expect… well it doesn’t matter what you’d expect, because it’s not here. Above all else, “Assassin Nation” #3 is a shocking, blood drenched, action packed, side splitting comedy. Lovers of katanas and f-bombs will find a ton to love. And if you don’t love those things, maybe this is the series that will convince you they’re worthwhile.

Final Verdict: 8.5 – “Assassin Nation” #3 is never predictable, frequently hilarious and crafted by some of the most daring creators in comics.