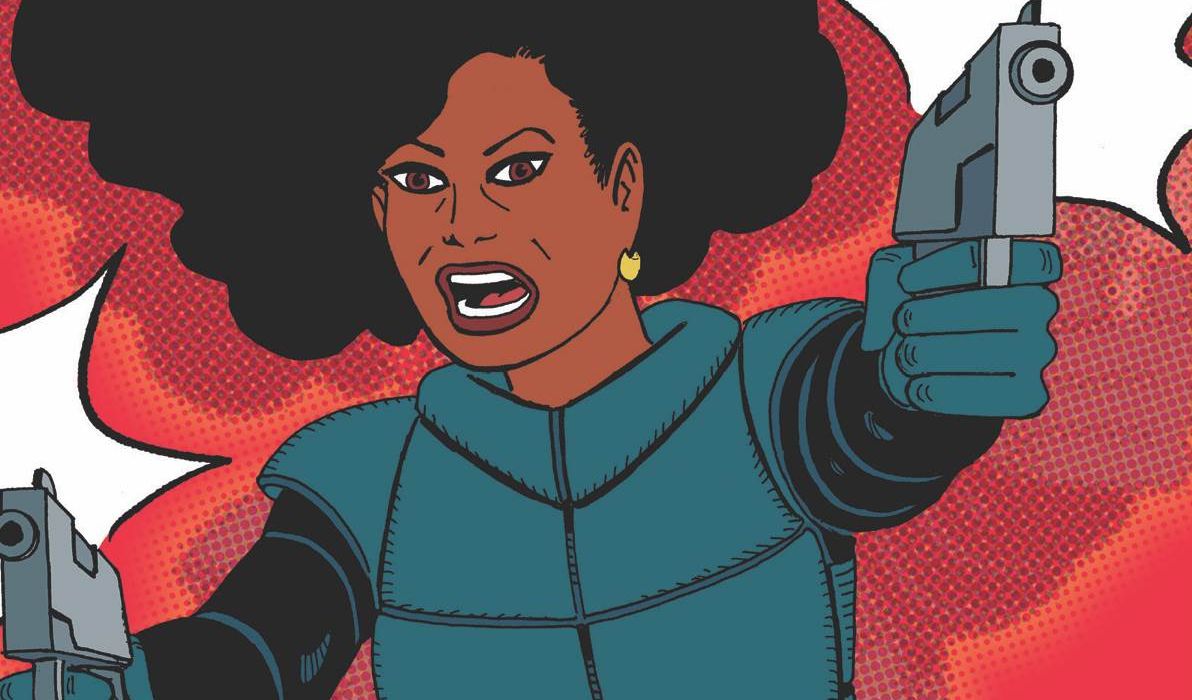 When someone pitches “Assassinistas” to you, it sounds like it has the makings of an epic. Dominic is a college kid who likes video games and his boyfriend, but disdains schoolwork and minimum wage jobs. Octavia is his mom, a world class assassin, who takes Dominic with her on a summer of murder and mayhem. If this comic had the name Mark Millar on the cover, we would already be looking at a movie franchise. As it happens it does not, and “Assassinistas” is more of a delightful, if small feeling comic that charms more than it thrills. 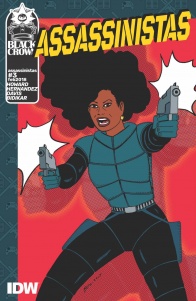 “Don’t feed me—I’m allergic to you!” Dominic shoots someone in the head, and Mom talks him through it. Because that’s what parenting is all about. Also, more on that purse iguana we know you love.

More than anything else, “Assassinistas” feels like The Tick. Not the current series on Amazon Prime, I mean the Patrick Warburton one; the show that was basically Friends but with superheroes. The book is like a small workplace/family sitcom, only starring a group of well-trained assassins and their families. Sure there are shootouts and backflips, but there’s also finding a babysitter and reflecting on past jobs gone wrong. In another world, this could have been a so-so series on ABC. Instead, it’s a pretty good comic.

“Assassinistas” #3 focuses on Dominic, who has apparently taken a human life for the first time. He’s not an assassin, he’s just a relatable college shlub. The tone pinballs around wildly but that’s the point. Taylor is out with his mom and his boyfriend and it’s exactly as awkward as you think it would be. Then he watches his mom get shot (it’s cool, it doesn’t pierce her body armor), which throws him for an emotional loop. This leads Dom, at the height of his emotions, to shoot the assailant in the head. Things aren’t what they seem and, a few twists later, everyone is emotionally confused.

That high level of confusion is where “Assassinistas” lives. Not that the story is hard to follow, far from it. Just the characters are all juggling a lot of confusing emotions. It’s really a story about a mom and her adult son seeing each other as peers for the first time. She’s still his mom, but he’s an adult now, and they need to learn to trust each other in new ways. It’s heady stuff for a tongue-in-cheek murder-cartoon-comedy.

The A plot is intercut with flashbacks to Octavia as a young assassinista and a zany, violent sorta-kinda babysitting scene that involves a mysterious iguana. It’s a lot, delivered in relatively few pages, over relatively few panels, and its more impressive how much meaning and story fits into the small space. Background details, like framed photos, carry a lot of storytelling weight, and the cartoony posture and body language says a lot with very little.

That’s because of the real draw: the incredible Gilbert Hernandez art. It has all the appeal of “Love and Rockets,” but one of the more out there stories. This has more swords and luchadore-style masks. What blew my mind was the use of negative space and color. Hernandez is one of the most experienced artists in the biz but what he’s doing here is next level. The block shapes of limbs draws the eye down the panel grid, effortlessly guiding the reader and telling a story all on its own. Let your eyes lose focus, and you’ll start to see hidden shapes and trajectories. By sticking to a simple color pallet, usually paring two shades in a scene, it’s easy to follow the action. Things like exaggerated jumps take on an artful geometry that is divorced from reality, but makes for some striking panels.

That’s not to say writer Tini Howard is anything less than stellar. It takes a certain kind of writer to trust an artist this much, and to write a script that packs so much into the pages. It’s high-level comic book storytelling, where the writer and the artist are doing great work, but the end result is better than either could stand on their own. “Assassinistas” #3 takes a big story and makes it feel small, and then big again, by combining life or death stakes with a simple family drama with a comedy. I feel compelled to compare it to a million different things. It’s like things like “Wanted” (though it’s much, much better than that) and The Tick but it’s also like an Edgar Wright film, and This is Us. The truth is, the reason “Assassinistas” feels like so many other things, is because truly there is nothing else quite like it.

Final Verdict: 8.2 – “Assassinistas” #3 is a unique sitcom; it’s lots of fun even before you consider the legendary artwork by Gilbert Hernandez.