The craziest college internship in the history of college internships comes to an end for Dominic, but he’s not the only one who’s learned something along the way. One of our Multiversity fan favorites wraps up with a dose of sentimentality, but not the sticky-sweet kind you’re used to in an Afterschool Special.

Please note that this review will contain spoilers. 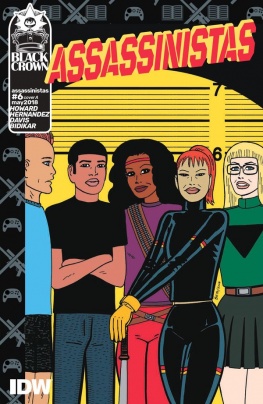 Kyler may be okay, but Dominic and Octavia end up in a spat over the gay thing (again). But there’s still bad people doing bad things out there, and someone’s got to stop them. It’s not going to be the Assassinista trio, who can’t get over their own internal bickering to figure out a plan.  Someone’s fate hangs in the balance, and the future of the Assassinistas trio is uncertain, as all things collide at Winnie’s Hot Wheels roller disco party showdown in the final issue of the series.

Let’s get this out of the way now: there is no roller disco party in this issue. Which is a shame, because I heard the 70s were back in style again, and I need some fashion inspiration. There are, however, many other great moments: a pregnant Charlotte wielding a semi-automatic rifle, the return of the purse iguana, one awkward coming out scene, and a crappy concert.  We make no attempt to hide the fact that we at Multiversity love this series, reviewing the first four issues, and running exclusive previews of issue #5 and this issue. That’s due in no small part to the match made in heaven of Tini Howard and Gilbert Hernandez, and all the things that made the first five installments so great are here in the finale. It’s an issue that provides closure to all our stories with life lessons learned all around, but not in that weird sickly sweet family sitcom kind of way.

As usual, “Assassinistas” #6 is a mix of flashback and present day, using the former to lead the latter. We open with a look at Octavia, Carlos, and Dominic not having much of a family moment (Carlos wants Octavia to give up the bounty hunting life and settle down to family life), ending with Octavia shrieking at her son “are you having a great time right now?!” – – which bleeds into the present day and mother and son bickering while in jail. What’s that about not learning from our past and being doomed to repeat it?

We also get a look back at Carlos’s coming out to his mother over dinner after his first semester of college, which ends up being anti-climatic for him in the worst way. Where else could a scented candle cause a spy to think her location could be compromised? This sequence is a master class in comedy writing, as Tini Howard builds up what could be the Big Emotional Moment(TM) page by page, panel by panel – – but deflates it before getting there, leaving Dominic to share his revelation with just the restaurant’s waitress, who offers up her own congratulations. Familial angst aside, there’s a mission to be completed, and that is executed in short order. There is one more flashback to treat the reader – – a look at how the trio of Charlotte, Octavia, and Roz really met. While it’s fun and befitting of the nontraditional friendship these women have had over the years, it made little sense to the overall plot and felt shoehorned into the issue. Was it left out of somewhere else and just inserted here because it’s the final issue? (On the positive side, it does plant the seeds for a second volume, should that come to pass.)

Gilbert Hernandez shows he knows how to draw action scenes, as the middle third of this book is the final shootout with Blood Diamond and the Assassinistas, and each of those panels keeps things moving. Hernandez balances his flat cartoon style and respect for negative space with action, resulting in sequences that neither feel overly detailed or ridiculously minimalist. Paneling work is sublime, using close-ups of objects and faces to set a larger scene. There’s also campy little touches of spy motifs, like a look at Carlos’s pursuit by Blood Diamond goons seen through the crosshairs of a rifle. All this helps your eye to follow narrative in a logical fashion, while having fun along the way. The 1980s look of the trio when they first meet at a dive bar is pure punk camp and true to the era. (Or at least what of the era I’ve seen in other media.  I’m not that old.) And while it seems ridiculous and borderline offensive to see a heavily pregnant woman holding a rifle, it just fits in with the silliness you’ve come to expect from this series. Throw in Tini Howard’s writing and you have the makings of “Archer” for the #MeToo era.

Does the mission wrap up a little too neatly? Perhaps. But this isn’t a book you read looking for philosophical insight or tactical accuracy; you’re just here for ladies and gay teenagers kicking ass. That said, this is a finale, so you can’t be without a fine mother-son bonding moment in the closing pages, where each realizes how much they really do need the other.  The heart of the Assassinistas is family, and whether that’s the family from blood or the family from choice, family sticks together. They’re off into the sunset to kick ass (after breakfast burritos) with the next generation right at their side.