Though Scott Lang has reached a new level of popularity with Nick Spencer and Ramon Rosanas’s latest run, “The Astonishing Ant-Man” #1 isn’t going to give him any room for comfort. Check out our review to see what lies in store for our favorite insectoid Avenger. Spoilers ahead! 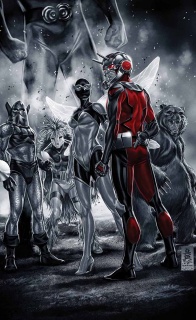 Scott Lang was a down-on-his-luck, divorced ex-con — until he stole renowned scientist and super hero Hank Pym’s size-altering technology in the hopes of saving his daughter’s life. Through that act of doing wrong for the right reasons, Scott inadvertently learned how to be a hero himself. With Pym’s blessing and his daughter Cassie at his side, he became… The Astonishing Ant-Man! But when a curveball upends Scott’s life, will he continue to be a hero, or will he return to his former life of crime?

When I first reviewed“Ant-Man” #1 a couple months ago, I wasn’t completely sold on it. Scott Lang felt a little too much like an utter sad sack and all the elements weren’t quite in place. But over the course of the past year, Nick Spencer and Ramon Rosanas have been crafting Scott Lang, his friends and his enemies into some of the more engaging characters on Marvel’s roster. And after having the time to set up the world they did in “Ant-Man”, “The Astonishing Ant-Man” is an incredibly strong start for anyone who didn’t follow Lang’s adventures the first time.

Scott Lang is three things: a lovable goof, a father, and an ex-convict. He’s happy to be the first, struggling to be the second, and will do anything in his power to forget about the third. After stealing the original Ant-Man’s armor to save his daughter’s life, Hank Pym elected to give Lang the armor and they both shared the title Ant-Man. There was a movie about it, you may have seen it. Anyway, Scott moved to Miami to stay in contact with his daughter and ex-wife who is not terribly fond of the dangers his being a superhero brings to her and her daughter. Now, Ant-Man is in charge of his own security company, having employed other ex-convicts such as Grizzly and Machinesmith, and is desperately trying to keep his new business afloat. However, his recently resurrected archnemesis and a new Power Broker have other ideas for him. Murder ideas.

What’s readily apparent in this new volume of “Ant-Man” is how much more willing it is to be messy. Scott’s strained relationship with his daughter has entered a critical condition after he decided to stay away from Cassie for her safety. That and the return of Cassie’s stepdad, that police officer Bobby Canavale played in this summer’s movie, has really twisted Lang’s personal life as he faces more attacks from Darren Cross and keeps failing to get clients for his security company. But Scott Lang’s life never feels like a toal bummer. Spencer’s writing lives somewhere near that quirky style Marvel’s been digging lately in books like “Howard the Duck” and “Unbeatable Squirrel Girl.” And while I’m a fan of both those books, they can sometimes feel a little too wacky, free of consequence. Spencer, meanwhile, never lets Lang off for a minute, as he strikes a nice balance between wacky fun and a grounded reality. As a result, everyone just feels a little more believable. Even if Cross’s thirtysomethibng son keeps calling his father “Daddy” at every available opportunity, it does more to give us an idea of the character rather than function as just a joke. That way, when Cross decides to use The Power Broker’s Hench app to send a villain to kill Scott, you can still buy him as, not just a real person, but a credible threat.

Speaking of the Hench app, bravo to Ramon Rosanas for making Whirlwind look like a legitimatly dangerous bad guy. As I mentioned earlier, “Astonishing Ant-Man” #1 is a much more grounded comic than you would expect, and Rosanas’s art reflects that. It’s not realist in the Alex Ross way where everyone is full of wrinkles, but characters are allowed to look a little awkward. Scott Lang spends most of the comic in his suit, but he’s never posing or anything. He just looks like a dude in an Ant-Man suit, and that’s absolutely where Scott’s at in some points in this book. His facial expressions for other characters are pretty subdued too. The museum director who happens to be the one Scott Lang fan could have been played up like a huge caricature, but actually comes off as rather endearing. Again, if there’s one strength in “Astonishing Ant-Man”, it’s the deftness Rosanas and Spencer have in turning ridiculous characters into real human beings.

It’s this skill in crafting a real fleshed out world that allow Spencer and Rosanas to earn their big emotional moments. Without getting into too much spoiler territory, BIG HONKING SPOILER ALERT TERRITORY this comic’s big final page reveal shows Lang in prison again, for undisclosed reasons. For another hero, that could be whatever. Heroes are wrongfully imprisoned all the time and subsequently break out with little problem. Hell, I’ve seen more drastic cliffhangers that have gone way further (lookin’ at you, “Batman & Robin Eternal” #1) but this is just so much more personal. Scott’s whole life as Ant-Man has been dedicating to staying out of prison, and to just suddenly see that he slipped and was locked up again is just heartbreaking, especially after seeing the life he tried to build with his security company. Now let’s just hope that Cassie can get a bit more of a focus if her dad’s not using the Pym Particles any time soon.

If you’ve ever felt like some of Marvel’s more recent titles have been content to strike off into their own consequence-free zones of the Marvel universe, then “Astonishing Ant-Man” might be your fix. Rather than ignore continuity, Spencer and Rosanas fully embrace the absurdity of Lang’s history while gracefully handling the very real situations that have resulted from his madcap life. I can’t think of a recent comic that so neatly balanced a character’s personal life with their superhero one.

Final Verdict: 8.7 – “Astonishing Ant-Man” is like if Stan Lee and Steve Ditko’s original Spider-Man run was about a divorced ex-con who hung out with a man in a bear suit.