Let’s face it, it feels like a long time since we have seen “Astonishing X-Men”‘s X and the original X-Men. Plus, getting the opportunity to witness the adult Jean Grey become reacquainted to her peers is fascinating. With so much changing in the X-Men world and so much staying the same, author Matthew Rosenberg should have a great chance of crafting a good comic with the heroes. The issue also features pencils from the great Travel Foreman! The “Tales to Astonish” creative team is back but is “Astonishing X-Men Annual” #1 any good? 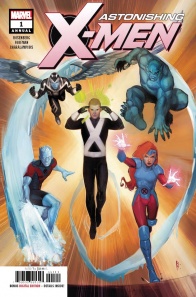 Jean Grey and the original X-Men reunite! Following her resurrection, Jean Grey can no longer make sense of her life since becoming an X-Man. Who better to relate to this than Hank McCoy, Warren Worthington III and Bobby Drake? But this reunion will prove bittersweet when they’re joined by an unexpected guest…the former Professor Charles Xavier, X! Why has X revealed himself to his former students? And what strange mission does he want to send them on?

For a franchise soaked knee deep into nostalgia, it is surprising that it has been so long since the original (non-time displaced) X-Men have been together as a unit. “Astonishing X-Men Annual” #1 shows some of the steps leading towards the transition of one team of X-Men to the next. The issue is also a fantastic character study geared around the fascinating mystery of X cultivated in past issues. With a core piece of X-Men continuity changed, “Astonishing X-Men Annual” #1 is able to push forward while commemorating the past.

Rosenberg’s script is most impressive in moments where he is able to punctuate the goodness from one of the core heroes while basking in the cynicism of X. The perfectly foul character notes for the hero make him the standout of the issue. There are so many charming moments X derails throughout the story. The harrowing speech X delivers to lecture the original team is another highlight, showing his more pessimistic outlook and how it relates to the vision of Xavier. Rosenberg elicits an impressive level of motivation for X and fleshes out his character in extreme detail.

The issue is full of standout scenes and also has some excellent characterization from Beast. His quirky opening scene brings just the right part of his character out. Beast has an interesting sense of curiosity under Rosenberg’s pen but also doesn’t come off as too snarky for his own good. Rosenberg comes up with a couple great ideas and scenarios for the character that challenge Beast and his ego.

Artist Travel Foreman brings a fairly special outlook to the script. Foreman does a wonderful job nailing dramatic horror scenes and bringing out the gritty aspects of X-Men’s domestic life. With a story-arc focused on haunting visuals and the sadness inherent in X-Men daily life, Foreman’s visuals feel incredibly appropriate. Rosenberg is a natural fit for the talents of Foreman, as his work with the artist tends to have a bleak subtext. Foreman also does a great job making sure X looks cool and collected in every scene he is in. The added detail of his dark brows and mysterious presence gives more content and substance to the story.

X is always wearing minimalistic, trendy clothes making him the coolest person in every room. The biggest downside to Foreman’s work is how his characters can be stiff and give off uninteresting body language at times. The issue does have a give-and-take, as the big action scenes are incredibly striking and grim. The final narrative conclusion Rosenberg makes is a haunting image showing off a crucial piece of characterization allowing me to perceive X differently. Had both the artist and writer not focused on their craft during this moment, the comic wouldn’t have been able to achieve such a palpable sense of emotion.

Despite the issue containing a nice sense of nostalgia and pleasantness to temper some of the darker moments, the last couple pages didn’t immediately ring true for me. The X-Men take a leap in logic and enjoy each other’s company for the night, but the character moment is rushed and Rosenberg hits this final beat too hard. In a moment where subtlety would have have been crucial, Rosenberg stumbles home. Plus, the writer thrusts Foreman into territory where he is not best suited.

Aside from a rushed, sappy ending, “Astonishing X-Men Annual” #1 is a pretty great deep-dive into X and the current state of the original X-Men. Reading this issue is an interesting primer into the current state of the X-Universe and a great character-driven annual. This installment is a great book to hand to someone who isn’t even that interesting in the X-Men because it is shockingly self-contained. “Astonishing X-Men Annual” #1 is a great spotlight on two rising Marvel stars and a fantastic platform for the original X-Men.