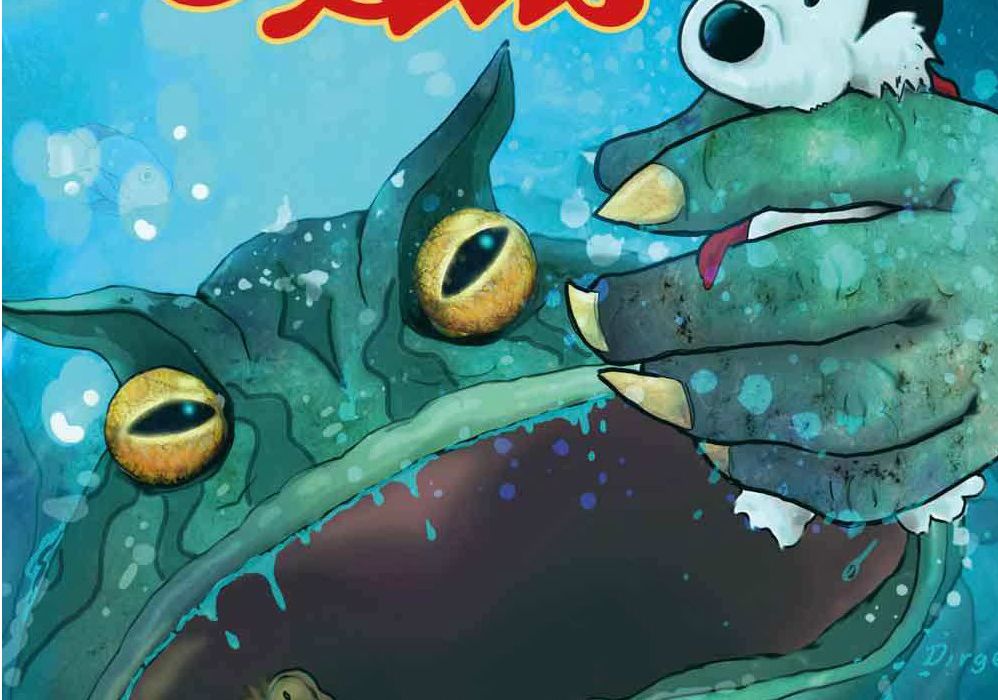 “Atlas & Axis: has been an ongoing series up with the best of them for some time… only, until now we’ve never seen an English translation. Let’s see how cartoonist Pau’s anthropomorphic adventure romp fares in an English speaking industry under Statix Press! 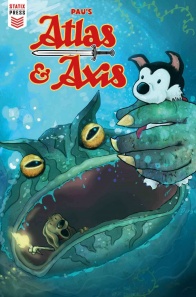 When roaming warriors Atlas and Axis return home to find that their village has been destroyed by Viking raiders, they set off on a perilous journey across land and sea to save their friends!

The first thing that comes to mind when reading “Atlas & Axis” is how it delights in it’s genre. Harking back to comics like “Usagi Yojimbo,” Pau establishes a historical narrative through the guise of animals, in this case, predominantly dogs. However, what’s interesting, is that the characters actually act more like the animals they take after rather than becoming more human-like. Both our protagonists display dog traits, both to comedic and dramatic effect. When Atlas first arrives at Axis’ house, he finds out to his chagrin that Axis has been wiping his butt over the carpet, and has a bad habit of always over sniffing other dogs’ behinds. But then, the traits become a natural part of the story later, with Atlas using the scent he grabbed of Mika, his love-at-first-sight crush, and asks other dogs about the same thing to find Axis once again. It’s interesting and makes for a unique method of storytelling, with the characters feeling human but portraying themselves with animal characteristics.

The plot itself is wrapped with comedy and tragedy, feeling familiar and original all at once. The inciting incident occurs to kick off the plot when our protagonists, quite abruptly, find their friends and family all murdered horribly by a clan of Vikings. They proceed to follow the trappings of a standard revenge tale, but then Pau throws another wrench in the works by taking Axis away from Atlas. That’s when the tale becomes even more interesting, as Pau subtly and easily works in plot thread after plot thread that all work together seamlessly – Atlas is looking for revenge for his brethren, trying to find his buddy Axis, and exploring through the north to also Mika, his romantic interest. Mika does at first feel like merely a plot device to further Atlas’ quest, but Pau does give her a quest and origin of her own, as well as an ability to fight and adventure on par with Atlas. All the while, Pau never hits you with walls of exposition, putting art on display first and foremost to tell the, at its core, fairly straightforward tale.

Like all good anthropomorphic cartoonists, Pau excels at telling an elegantly simple tale with some stunning sequential art. The style feels like a blend of Hergé’s “Tintin” and Bill Watterson’s “Calvin and Hobbes”, with the former’s clean linework and eye for background detail, and Watteron’s dynamic, buoyant character work that excels at conveying expression. I even get a hint of Albert Uderzo’s art on “Asterix” with the way that Pau conveys a barrelling, fleshed out landscape – in the case of “Atlas & Axis,” it’s more Nordic with high cliffs and deep valleys. One of the most striking scenes for this early on is the third page, which opens with a panel depicting Atlas racing through a stunning green landscape, garnished with an archaic stone cliff and creeping, lush vegetation on each corner of the panel. Simultaneously, we get the classic, fast-paced character work with Atlas dashing through the valley, with a voice that feels old fashioned yet modern all at once.

Something that stuck out to me while reading was the supercharged pacing in which Pau depicted his characters moving through space. This would occur in wordless travel sequences as expected, with one in particularly occurring just after the death of the protagonists’ families. We get a seven panel sequence of the pair journeying through a slightly cloudy day on the coastline, then venturing inland to walk through a rain-soaked forest, a windy cliffside once again, and a rocky outcrop at dusk. All of this happens seamlessly within the one page, and it feels totally natural – a testament to Pau’s pacing and art ability. Yet this kind of sequence also occurs during dialogue sequences: one of the best occurs when Atlas is adventuring in the wilderness once again, but now searching for Axis. We follow his spoken train of thought, but not simply through one environment – like in the prior example, the setting changes panel to panel whilst still following the same dialogue line. It’s a touch I found really dynamic, keeping the reader interested by showing not just moving through a single space, but through multiple distinct ones.

Pau’s coloring work here is alike the rest of his work: an exquisite blend of nostalgia and thoroughly modern styles. From the start, Pau uses vivid, angry reds to let you know that this may feature animal protagonist, but this isn’t any old kids’ tale. Once we move into the main storyline, we get a more traditional approach to colors, using bright but not overly saturated greens and blues to convey the vast environments. The shading is what separates it from the classics – the digital style has a softness to it, almost as if it were drawn with a mix of paints and crayons. Pau uses digital effects only when necessary, too, and only to convey mood at the biggest of moments. When Atlas and Axis are mourning their family, it’s on a lagoon beneath a glowing purple sunset that feels like a closing on a chapter in their respective lives. It’s artwork as storytelling at its finest, and Pau stands up with the best of them in this regard.

I found a new love in this translation of the enigmatic “Atlas & Axis.” A new, lovingly rendered and highly original anthropomorphic adventure series that has the artistic and writing chops to stand up with the greats. If you’re a fan of comics like “Usagi Yojimbo,” “Spy Seal,” or any form of fun, please make sure you don’t miss out on this European gem.

Final Score: 9.5 – “Atlas & Axis” #1, like others of its genre, is a labour of love: infectiously merry character work, breakneck pacing, and beautiful art make this comic one to keep an eye on.