“Avengers” #20 may be part of a multi-tiered and sprawling saga like ‘War of the Realms,’ but at its heart it is a character study on Jennifer Walters, aka She-Hulk. By choosing to lean on that direction, the creative team was able to deliver a strong stand-alone issue in the midst of all that event craziness. 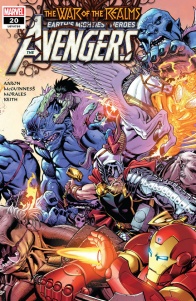 WAR OF THE REALMS TIE-IN! The final battle for Midgard! Captain Marvel leads the War Avengers! Hulk battles Ulik! Blade takes on the Black Berserkers of Roxxon! Plus: Daredevil the God Without Fear has a cryptic message that will decide the future of the team.

Peter David is, perhaps, the writer most known to use psychology sessions to dwell within the psyches of his characters, at the same time showing a lot of exposition in a natural way to readers. That style has been in full force during his “Incredible Hulk” era, as well as early issues of the government-sponsored “X-Factor” days.

John Byrne is, perhaps, the writer known for introducing mainstream super-hero characters that are able to break the proverbial fourth wall. Long before Deadpool did it, Byrne relished on the concept with his She-Hulk series of the ’80s.

It is a joy, then, to observe how Jason Aaron chose to drink from both of these master’s wells for a surprising stand-alone issue of She-Hulk, disguised as “Avengers” #20, and a tie-in to ‘War of the Realms’ no less. The architect of this massive event, Aaron has been wise on his strategy to use “Avengers,” and even his “Thor” series as complimentary chapters to the main event.

Before continuing to plot and script, it is truly a joy to see Ed McGuinness art evolve on recent issues. The artist is already famous for his larger-than-life action scenes, but it has been on quite moments, personal instances, where this growth is more apparent.

Yes, She-Hulk does smash quite a bit during “Avengers” #20. Fighting scenes with Ulik, king of the trolls, are amazing, with the pages barely containing all the tightened muscles and explosions (a splash-page, in particular, hammers that point home). The very final panel of the issue is intentionally done mid-battle, proving to the audience that Jennifer’s strength is nearly unparalleled.

And yet, it is on the opening pages of the book, largely contained on Walters’s mindscape, or during a heartfelt conversation with fellow hero Daredevil, that McGuinness flexes his own muscles. First, there a sense of emulating past artists on their depiction of She-Hulk (there is a Byrne panel that will make fans of that series very happy), as well as more recent interpretations. The contrast between the various incarnations of She-Hulk is crucial to the plot, so it makes the visual delivery of that more engaging. There is also a lot of investment on facial expressions, be it between Jennifer and Carol Danvers (that compassionate look of one who knows what a friend is going through), or even on Ulik’s defeated semblance as he realises how formidable an adversary She-Hulk is.

Keith’s colors is pure blockbuster material. The action scenes feel explosive, with color hues and contrast ramped up to eleven. It really supports the excitement on those sequences and make them flow all the much better. Perhaps a more subdued palette could have been used for the quieter moments, aligning them more to the tone, but it is a small nitpick on an overall great job.

Back to Aaron’s script. Arguably ‘War of the Realms’ is a story over five years in the making, since the writer started to narrate Thor’s adventure. Regardless of that, Aaron has been able to slice and dice the chapters, both core and ancillary, of this adventure, not lingering too much on each set-piece, but without being overly frenetic either.

There is a lot of character introspection on this issue. The writer has been criticised in the past by the treatment handed to She-Hulk, but it is becoming clearer by the minute that there is a long-term plan for Jennifer Walters for those willing to wait. It is clear that the same frustration some fans have is felt by the lead character herself, both in how she handles it internally, as well with other Avengers.

It is not only on internal debate that the story develops. Other than the big action, there are pages dedicated for story lines to come. Daredevil (now, the all-seeing god without fear) hints heavily at multiple plot bits that will be forthcoming on the pages of “Avengers,” and even other characters like Black Panther and Blade bring further sub-context elements to this issue.

Part massive event, part deep character study, “Avengers” #20 feels like a breather in the middle of ‘War of the Realms.’ The combination of the occasional big action piece keeps it exciting, while opening several doors for new stories to come.

Final Verdict: 7.9 – Aaron, McGuiness, and team deliver another strong issue on the broader ‘War of the Realms’ narrative, knowing when to pull back on both big plot moments and visual action scenes.