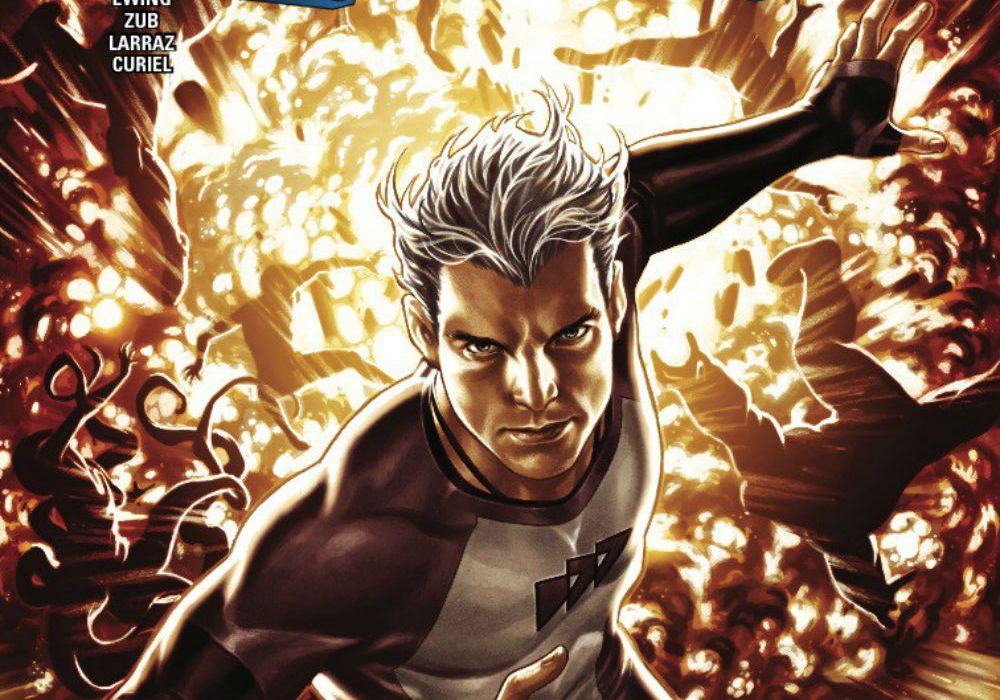 The Avengers are ditching their three books and going weekly for a huge crossover storyline. The first two chapters turned out pretty well so far. Will Marvel be able to retain the high level of quality while telling a coherent narrative on a weekly basis? Readers still don’t know the villains behind the narrative or the finer mysteries going forward. I’m crossing my fingers hoping the title can keep its head above water. NO SURRENDER Part 3! Quicksilver flamed out of the Avengers, leaving devastation in his wake. But now that it’s all hands on deck, is this his chance at redemption? Or will his hunger to prove himself be his downfall?

‘Avengers: No Surrender’ part 3 starts with a literal explosion and moves at an extremely fast pace immediately following. With such a large cast of characters, picking up the pieces from what just happened and starting to establish the villains in the story can be really tough, especially considering lots of heroes in the mythos are so new. However, writers Jim Zub, Mark Waid, and Al Ewing continue to inject the story with a really strong focus. The plot moves very fast and initiates a much needed high-stakes battle between the different factions. Somehow the story also manages to pay off previous plot threads while teasing the new villains are going to come into the narrative in the next couple of installments.

Quicksilver, in particular, becomes the focal point of the issue. He is an endlessly fascinating and complex character who the writers inject lots of motivations and ideas into. This issue gives readers a glimpse at why the Avengers have had such a tenuous relationship with Quicksilver over the past couple years and show his trademark shortcomings without making these elements of the narrative too pronounced or silly. His inferiority complex creates an interesting bubble of tension underneath the surface of the book.

Even with such a sprawling cast of characters, there’s still a couple moments of levity and time for the little beats as well. Red Hulk pops out of his shirt in a silly moment in the background which will stick in my head for a couple weeks. There are also a few slow moments where Pietro and Wanda get the chance to explore their relationship and deal with the continuity which got them towards the next steps in their story and why they have had so much friction over the past few years. Getting the nuance of Pietro without making him feel annoying is a herculean task the trinity of writers nicely address within these pages.

The action scenes and character moments in the title feel fantastically fluid thanks to the finesse of Pepe Larraz, who manages so many different characters at once while retaining a remarkably high production value throughout the title. Larraz’s introduction of a new character is a huge moment that looks incredibly important and interesting thanks to the framing and detail lent towards the book. It is important not to take for granted  just how amazing this is all happening on a weekly schedule while other “Avengers” titles are still being published. It is obvious a great deal of work went into preserving the impressive quality in the comic and getting Larraz at his best three weeks in a row is nothing short of a miracle.

If there’s any major criticism I could lend towards the script, it is simply that Quicksilver did not get enough of the spotlight of the narrative for the writers to give him a full arc. The ending feels very abrupt and I’m not sure if the creators will really have enough time to dig back into his psyche and give him the attention he needs. However, this issue, in particular, is meant to be read in close succession with the other Avengers issues and is likely meant to be ingested as a whole so I believe the criticism could prove invalid if the quality remains at such a high level. The framing sequences in the action scenes and the vibrant, warm colors from David Curiel help fill in some of the detail as well.

While Quicksilver’s overall arc is far from finished, “Avengers” #677 has the focus and interpersonal team dynamics to keep readers interested. With so many different heroes flooding the airwaves, each member of the team is still has a unique voice and it is fascinating to see where all the different players are headed with the finer pieces still left in play. This chapter also shows that the storyline still has plenty of surprises left in-store for upcoming installments.

Final Verdict: 8.0 – “Avengers” #677 is a focused comic providing additional beats with Quicksilver while retaining forward momentum from past issues.