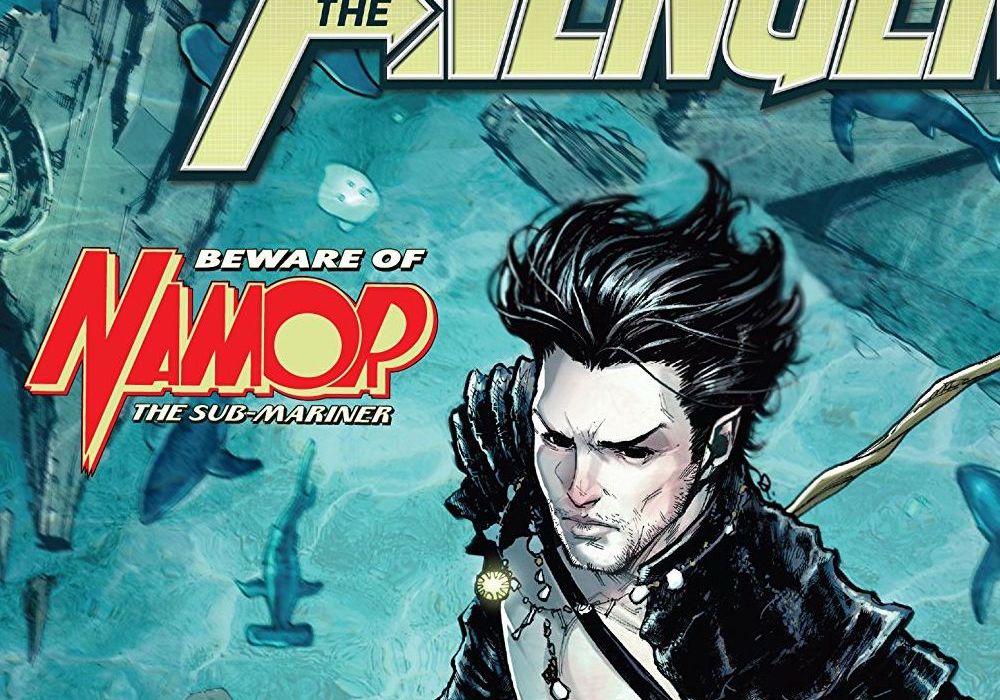 In the past issue featuring artist David Marquez, “Avengers” was able to achieve a staggering level of quality the series has never evoked before. With Marquez still contributing to the interiors and with a huge anniversary issue on the way, will “Avengers” be able to keep up the momentum and solid level of quality going forward? Will the shallow sense of humor get in the way of the actual story author Jason Aaron is trying to tell? Also, the title’s odd decision to take a diversion to Atlantis without properly establishing the new status quo of the character is an odd choice. Does “Avengers” #9’s risky gamble pay off? 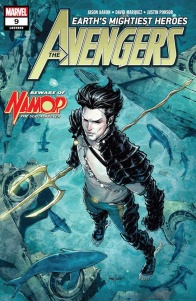 WORLD WAR BELOW! With the underwater world on the brink of war, the Avengers go aquatic to save the day, but air-breathers are no longer welcome in the undersea city of Atlantis. And Namor, the Sub-Mariner, lord of the seven seas, has a bold new plan that will change the balance of power on Earth forever

“Avengers” #9 is a curious issue which happens to start on a particularly strange note. Readers get to immediately witness the new, extreme status quo for Namor and get to know some of the aquatic leads in the Marvel Universe. Aaron definitely takes these characters in some interesting directions but readers only get a surface level look at Namor’s motivations. Namor has received a huge status quo shift here giving him an even angrier, icier demeanor. Aaron’s opening for the story is definitely a curious one that establishes new aspects of the story, but the issue could have used an additional element making it more intriguing.

When the Avengers come back into the narrative via the following scene, the issue takes on a more familiar nature and bears a tone similar to the initial series. The issue utilizes tried-and-true action set pieces thanks to Namor’s new lease on life. By the time readers start to get an idea of what the villain is hatching, it is too late. The only problem with Namor’s new spin is the title isn’t able to explore why he decided to make the decisions he did. The issue starts to truly come alive in the middle section where Namor shows off his new power and level of arrogance.

Thankfully once the action in the book takes hold, Aaron starts exploring the shared history between Namor, Black Panther, and the Avengers to deliver on some interesting aspects of previous continuity. The intro sequence, in particular, has some interesting things to say about past characters. Plus, the final page is full of fascinating new takes on previously established villains.

Marquez delivers on the more regal elements of the sea very nicely in the issue. Framing the comic in the context of recent artists of “Aquaman” pulls a particularly fascinating juxtaposition. The painterly style of “Aquaman” is interesting to compare to what Marquez is evoking with his detailed contributions. With the pencils of the issue being so precise and the framing of the underwater sequence, readers get a great sense of the underwater action in the issue. With Marquez’s excellent attention to detail and Justin Ponsor’s beautiful colors, “Avengers” #9 looks slightly different from other Marquez work. It is easy to always tell that the issue is consistently set underwater. Marquez does an excellent job selling the more action-packed moments of the script as well. The scene-stealing line featuring Black Panther is particularly awe-inspiring thanks to the pacing and composition.

Unfortunately, the title starts to go in a more familiar scripting direction following the really exciting Marquez panel and delivers an ending that readers will probably be able to guess as they continue to read the final pages. While the moment has the proper level of build-up it does end up coming off as slightly predictable. Also, the next installment of the issue features a big, milestone anniversary issue. The half-baked premise of Namor’s angry direction may not be worthy of such a massive story.

Hopefully, Aaron will be able to take the time to flesh out his new take on Namor and sell the concept as he starts to gear up for the milestone issue. Even though this new installment of “Avengers” is far from perfect, the issue still retains the more grounded tone from the last issue that made it so endearing in the first place. The interaction between the different “Avengers” cast members is still the star of the show. The moments between the other members of the team including Ghost Rider and Captain America are two clear bright spots of the story that excel.

With more development for Namor and a conflict with higher stakes, “Avengers” #700 could be a particularly impressive next outing for the franchise. Aaron is one of the strongest, if not the strongest creative talent currently working at the publisher. Alongside Marquez, this is one of the best creative teams the publisher can put forward. While this issue is charming, it is apparent each member of the creative team is capable of delivering something truly spectacular that the tile has only achieved once before.

Final Verdict: 6.7 – “Avengers” #9 is an fine prelude to a new direction for the franchise.