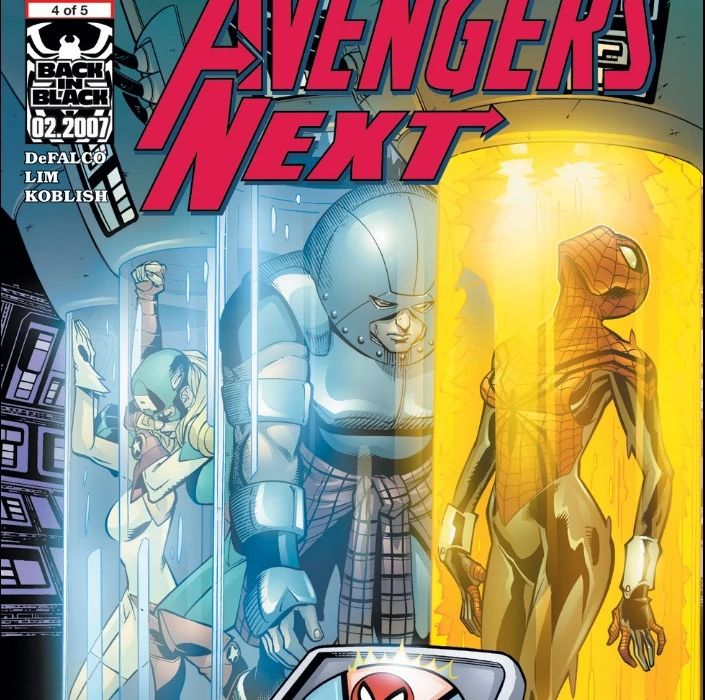 We covered them, folks. All twelve issues of the original 1998-1999 series, “A-Next”, starting here. I thought I had left no stone unturned. It turns out, that there was a sequel series waiting in the wings all along! That’s right, dear readers, will we skip ahead from the late nineties to the *checks notes* glorious mid-aughties? Yes, dear readers, take my hand as we venture into the twilight years of Marvel’s MC2 timeline with the 2006 “Avengers Next” miniseries. Will it hold a candle to the original? Let’s find out together! 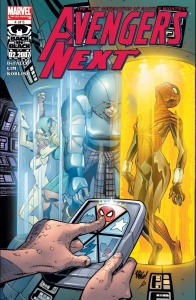 We’re rolling along fast to the end of this coverage, folks, and the series is starting to reflect that! Thankfully, the text as a whole feels more pointed than the directionless last issue. From the get-go, the comic represents that forward momentum by having a grumpy Mainframe storm down the hall of the Avengers base. It’s a great way to hit the ground running, and bring this essential “A-Next” leader back into the fold. I love that DeFalco is now writing him oozing with personality, it shows a massive progression of character to the somewhat subservient AI that we got to know in the original series. Mainframe here is the parent returning home to the babysitters after a night out, only to find the house trashed and its residents missing, and that energy makes for some fun storytelling. Lim and Koblish render Mainframe with this imposing bulk that makes him feel like a powerful patriarch, who dominates every scene he is present in.

When we flip over to the villains keeping the heroes in huge sci-fi silos, we get a great bit of Tom DeFalco dialogue. American Dream’s backstory is succinctly and well told via that classic Marvel house-style narration as the panel zooms out from her face, giving readers just enough information on her history and character that feels relevant to her present perseverance and struggle. It’s this narration that makes the M2 line such a breath of fresh air in the relatively dour publishing year of 2006-7. Most of the superhero house styles had nixed this form of storytelling in favor of more punchy and direct dialogue or internal monologue, but DeFalco instead keeps it around and adapts it to be more concise and effective, to feel evocative of classic comics whilst still appealing to a modern audience.

Panning out a touch more from this scene, we get a bit of villain-splaining which is always a little campy but comes off well in this issue, especially in showing how alienated Warp feels. To add to that point, we finally see Warp realize how much he’s in over his head and side with Kevin Masterson to help him escape from these actually-homicidal super threats. Masterson feels a little one note in this scene, a point that even Warp touches on when he says “*Yawn* You really need to upgrade your dialogue, Masterson” which came off as a weird self-dig from DeFalco about his writing style. The colors thrive in this scene, however. Ro gives us a moody washed-out blue overlay that adds a level of drama to Masterson’s dialogue and Warp’s decision to switch sides. The glowing highlights of Warp’s portals also feel like a ray of hope more than they ever have in the story before, which feels like a conscious decision given what’s happening.

After a while, Mainframe arrives on the scene accompanied by the outliers Nova and “Earth Sentry” (a weird name downgrade from Captain Marvel). Lim and Koblish draw the trio coming out of the quinjet with a heap of gravitas. These guys feel like heavy hitters, and they should! Mainframe is the original team leader with an Iron Man powerset, and the other two are cosmic Earth guardians. The three fly out in instant formation and have a powerful litheness to their body and stances. They’re met, alas, with resistance from *checks notes* energy-based Avengers clones? The Marvel science is stretched a little thin at this moment but it’s touched on so quickly that it didn’t take me out of the story too much. The actual big sell of this scene, however, is that Sylene reveals that her old crone form was just a facade! She’s actually the young and hot-bodied daughter of Loki, which was kind of hilarious to see from our future publishing standpoint where the real Loki has been more age and gender-fluid on the page than ever before. She reveals her grand plan to restore Asgard to its former glory by using the Avengers’ unique powersets to terraform Earth into a facsimile of the Nordic heaven. Lim and Koblish even get a fun moment where they render just about every M2 character in existence behind Sylene, which is a great little Marvel visual encyclopedia/Where’s Waldo-type moment.

The issue ends with the stakes truly ramped up to ten, which is super exciting given that we have only one issue of this series left! Ulik quite capably takes apart Mainframe as they have a spirited debate, in which DeFalco writes the brilliant Ulik dialogue “You place too much faith in science and technology. We will succeed — [only] because we MUST!”. The Earth is terraformed with a little bit of mystical Marvel nonsense which again pushes the boundary a touch too far as J2’s transforming power is used as the catalyst. But it’s the final page that really gets the blood boiling for the finale issue, with Masterson and Warp meeting with Jarvis to discuss that yes, they are once again fighting with their backs to the wall, but hot damn, they’re gonna figure it out, because that’s what Avengers do! DeFalco knows exactly what buttons to push with superhero fans, and I can’t wait to see what the series has in store for the last big throwdown. 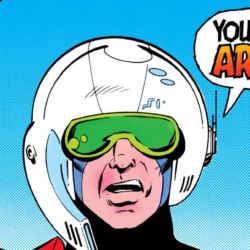 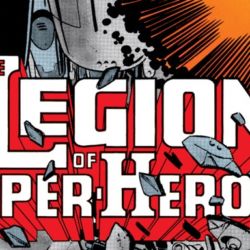 The Legion read-along continues with a rare four-part story. Do Levitz and Giffen deliver another epic on the scale of “The Great Darkness Saga?” Read on to find out!The Legion of Super-Heroes Annual #2, #307-310Written by Paul Levitz and Keith GiffenIllustrated by Keith Giffen, Larry Mahlstedt, George Tuska, Pat Broderick, and Mike DecarloColored by Carl […] 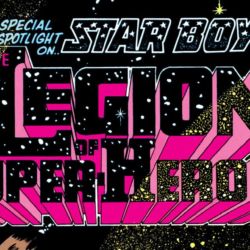