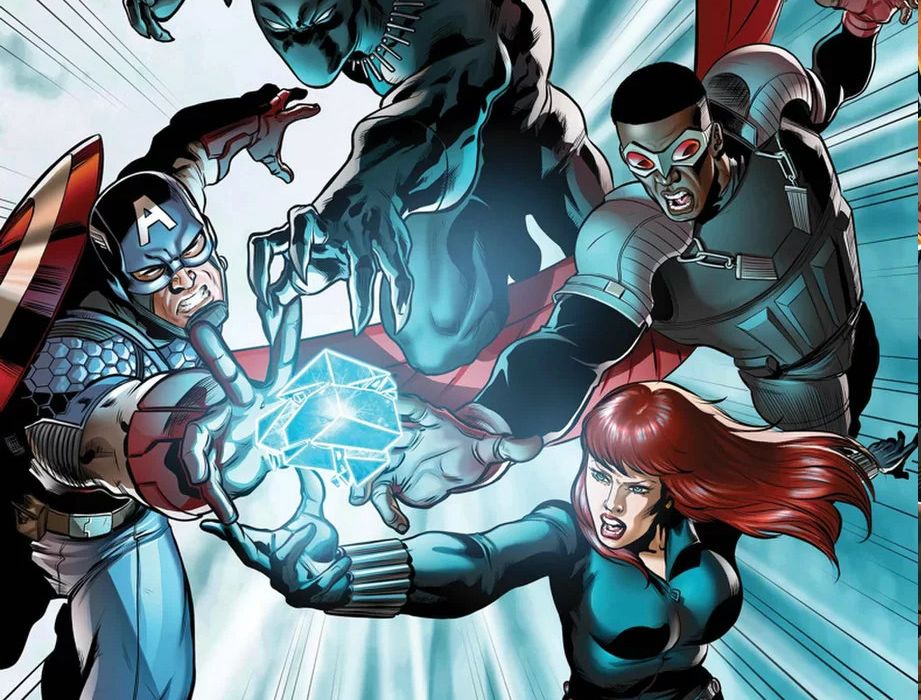 With Infinity War drawing ever closer, the hype for anything infinity-related grows. So, what will “Shards of Infinity” give us? Read on and see. 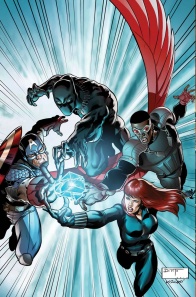 EARTH’S – AND THE MOON’S – MIGHTIEST HEROES!? A new threat has emerged: An evil organization calling itself LUNAR has been secretly building a powerful weapon on the surface of the Earth’s moon. BLACK WIDOW infiltrates the group to uncover an even more startling revelation: Their weapon is powered by shards of the COSMIC CUBE! Legendary creators Ralph Macchio and Andrea Di Vito bring CAPTAIN AMERICA, BLACK PANTHER, THE FALCON and BLACK WIDOW together for a cosmic thrill ride you won’t want to miss – and new villains you won’t want to mess with!

So, with a massive story involving the Infinity Stones coming up in the comics, and the next Avengers movie relating to the same, you might be wondering which of those this comic connects to.

The answer is: neither.

In fact, it has nothing to do with any stones, gems, gauntlets, or marbles related to anything infinite, but rather, the Cosmic Cube. Maybe the title is a little misleading, but it still sounds cool.

What we get is a one-shot not set in any current continuity, but features a nice selection of heroes that moviegoers will be familiar with. Captain America, Black Widow, Black Panther, and Falcon come together in this to fight an evil organization called L.U.N.A.R., no relation to any of the other various evil organizations in Marvel, though equally interchangeable.

I do quite like their uniforms, though: they’re all white with a crescent moon on the belt, so at first they do seem to have a very Moon Knight-inspired design. But the selling point for the minions is how their face-concealing masks have a black circle around one eye, creating the crescent shape; it’s a clever design.

The story is rather straightforward: L.U.N.A.R. is building a superweapon for world domination, they’re using shards of the Cosmic Cube to power it, and the Avengers have to stop them. They fly to the moon, fight it out, and (spoiler alert) save the day.

So what “Avengers: Shards of Infinity” needs to stand out is the characters and dialogue that carries through the admittedly simple story. The most interesting part is certainly L.U.N.A.R., its head honcho, Irma Krakov, and her muscle, Klove. They’re good enough as far as villains go, and they certainly like to talk while fighting, so we get a good grasp of their voices and personalities without slowing down the action.

However, when it comes to “show, don’t tell,” the comic does sometimes feel the need to tell while showing. It uses the style of narration common in older comics, where text boxes spoken by no one in particular describe exactly what we’re seeing in the panel.

For instance, one scene shows the super-weapon firing a laser into space, bouncing it off a satellite, and having it strike a SHIELD helicarrier. Not only is each step of the process described, it even narrates the exact class and location of the helicarrier.

That’s not necessarily a bad thing; it’s just the comic’s style, which may not work for everyone.

That said, the dialogue does get a little clunky at some points for similar reasons. It’s not enough for Captain America to tell Black Panther to take point, he has to specify “take point with your vibranium gauntlets.” When we see Irma Krakov give Klove a command while standing at the main console, Black Widow still feels the need to state “Krakov gives the orders and she’s at the main console.”

Other than those moments of redundancy or extra explanations, though, Ralph Macchio keeps the dialogue flowing smoothly throughout, pacing it well from panel to panel so that it doesn’t interrupt the flow of the action. He has a good feel for the pacing of the comic, and it shows throughout the entire issue.

Artistically, much of the same could be said about “Avengers: Shards of Infinity.” It’s effective and not too complex; Andrea Di Vito’s artwork is very crisp and clean, with solid designs throughout. There’s a nice amount of detail put into each image, and Laura Villari’s color work is bright enough to give it a friendly and almost cartoon-like feel to it.

However, there are some moments where the artwork really shines, and when it does, it’s given the space for it.

When the aforementioned helicarrier is destroyed, we get a full page showing that destruction as it crashes down into the sea. The ship is falling apart at the seams, fires burning above it as the water below engulfs it, and the way the page is set up demonstrates the enormity of the ship. It really sells the impact of the destruction, making it a very effective page.

Similarly, we get a great image of the heroes rushing into battle. The way the door they bashed open frames them is a nice touch, and the dynamic action poses with the four heroes in a group demonstrates how well they work as a team while simply looking badass.

During the combat itself, Di Vito’s artwork goes along well with Ralph Macchio’s dialogue. Just as the conversations flow during the fights, so does the combat itself, each action linking to the next nicely. Even when it cuts between different fights, the way the characters are laid out from scene to scene draws the eye from one to the next smoothly, keeping the entire comic flowing well.

Macchio also makes sure to utilize each of the characters he’s picked for the mission. Everyone serves a purpose and gets a chance to do something cool, even if they occasionally have to describe exactly what it is that they’re doing.

In the end, “Avengers: Shards of Infinity” is a decent one-shot, and may be a good gateway comic for younger readers who love the movies and want to start on the comics. As it’s not connected to any comic or movie events, there’s no long continuity snarls to have to work through, though at the same time one might skip the comic because it doesn’t tie into any larger narrative.

If you’re just looking for a good self-contained story featuring some fan-favorite Avengers, though, this is a fine choice for the week.

Final Verdict: 7.1 – While a little over-expository with the dialogue at times, it’s still a fun little Avengers story with good designs, great flow, and engaging action.