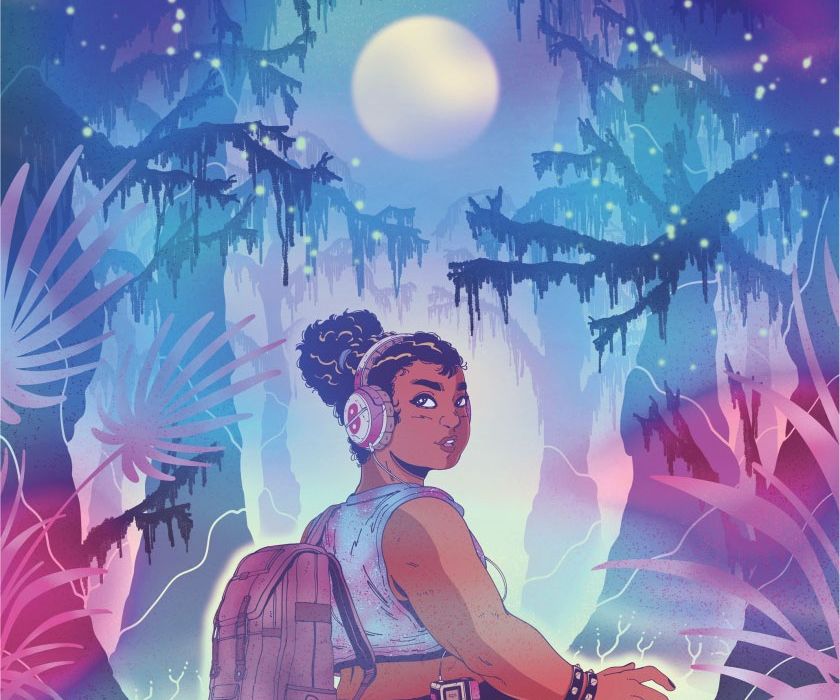 Like its eponymous protagonist, “b.b. free” #1 knows where it wants to go and what it wants to do, but has yet to begin its actual journey in earnest. (Warning: may contain minor spoilers.) 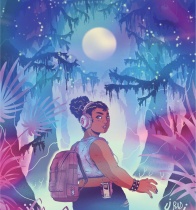 b.b. free broadcasts her underground radio show from her remote swamp community, and she has no idea she’s actually the chosen one. It’s been over a hundred years since the Plague That Ate Greed wiped out half the population, and it’s the only world that b.b. has ever known. But when b.b. rebels against her overbearing father, she realizes that everything she believes in could be a lie. On the run from her own family, b.b. will learn the truth about the world she lives in, and about the power she never knew she had. Writer Gabby Rivera and debuting artist Royal Dunlap present an adventure for fans of Blackbird and ‘mysterious destiny’ heroic fiction like Naomi about finding your family when the whole world is against you.

Spend 5 minutes perusing the YA section of any decent book store and you’re likely to find a hefty stack of post-apocalyptic fiction that centers on climate disaster and subsequent global financial collapse. At this point, as the joke goes, it’s no so much science fiction as it is current affairs. Wherever they might be shelved, however, none of those other books were written by Gabby Rivera, creator of Marvel’s first queer Latina superhero, America Chavez.

Despite the fact that it’s set 200+ years in the future – long after the world has been ravaged by The Plague That Ate Greed and cataclysmic weather events that killed 60% of earth’s population – Rivera has described her new ongoing series from Boom! Box as “a bouncy love letter to queer kids everywhere, especially the chubby Puerto Rican ones.” She’s also said the book’s plot was inspired by the kind of wild, trippy adventures she dreamt of going on as a kid: “Usually on motorcycles, with magical powers, and no parents to mess with our fun.”

The titular narrator b.b. harbors similar hopes and ambitions, like traveling far away from the swampy Florida Islands and her sleepy hometown of Gainesville, “the booty bottom of the Fractured States of America.” She longs to hit the road, meet other kids, and broadcast it all on her radio show. Unlike the author’s childhood fantasies, though, b.b.’s domineering father Helos definitely seems determined to mess with b.b.’s fun. “The world outside here is evil,” he tells her flatly, “so be a good girl and do as I say.” To him, that means wearing a dress, dutifully serving lunch to others in their “Sharer Community,” and most importantly, keeping quiet about any possible thoughts of leaving home when she turns 15.

While the intra-family dynamics may feel like pretty standard fare, the artwork is anything but. Certainly, Rivera’s script makes it clear, in ways that are both overt and more subliminal, that b.b.’s world is much different from the one we know. Pulling double duty on inks and colors, however, debut artist Royal Dunlap takes things to a higher level. The design and rendering of b.b.’s eco-pod dwelling and her friend Chulita’s high tech production console give the book a reliably futuristic sheen, but the seemingly over-exposed, sun-scorched color palette unrelentingly reminds us – as b.b. slyly notes early on – Mother Nature is tired of that ‘good girl’ crap, too.

“When I first read through the story outline for ‘b.b. free,’” said Dunlap in a pre-release statement, “I was immediately sold by the eco-dystopian setting.” With a heavy dose of bright yellows, oranges and pinks that feel like their turning and burning off into nuclear white, you can feel the heat rising right off of Dunlap’s page. Even normally cool colors like blue and green feel like they’re warm and getting hotter. No wonder Buttercup, “the best gator amigx ever and hard femme swamp protector” is yellow instead of green.

Equally impressive are Dunlap’s highly engaging character designs. b.b.’s dialogue and interior monologues are decidedly smart and sassy – and she clearly looks the part. When we first see her she’s sporting an ever-present pair of red headphones, along with a scrunched up hoodie that bares her shoulders and midriff, a pair of distressed, rolled-up jeans and red high top sneakers. Thick, strong and self-assured, she moves with confidence and purpose, exuding a quiet power that extends beyond her years. Later, cloaked in a dress with printed suns, moons and shooting stars, she still looks like a rock-solid bad-ass who you know would have your back.

Ultimately, both Rivera and Dunlap do a great job of introducing a unique, highly compelling protagonist who looks, acts and sounds completely authentic and special. No doubt, she’ll have some flaws and even some room to grow, but she’s very likable – the kind of character you gladly want to spend a whole series with. There’s some solid world-building, too, but with plenty of pre-press hype about a whole crew of rag-tag Swamp Nerds – as well as some sneak-peeks at artwork of the same – in a lot of ways this debut can’t help but feel a bit slim and incomplete.

Final Verdict: 7.3 Writer Gabby Rivera and debut artist Royal Dunlap understandably put their energy into unveiling the titular character, but “b.b. free” #1 kind of feels like hanging around waiting for the party to start.