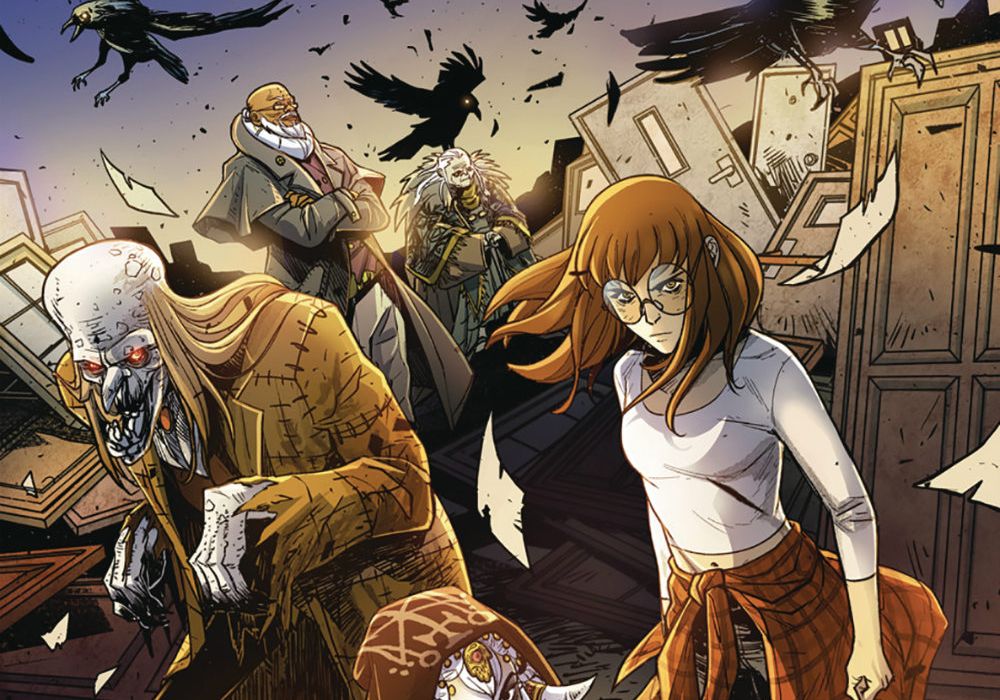 Justin Jordan is no stranger to fish out of water empowerment fantasies. Neither is he one to fan favourite Aftershock Comics. “Backways” sees him with both of these and with fantastic collaborators in Eleonora Carlini, Silvie Tidie and Marshall Dillon. So, does “Backways” have the potential to be the new up and coming fantasy tale on the block? 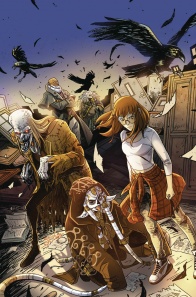 Coyote Bones leads Anna deep into the Backways in her search for Sylvia. Unfortunately, Coyote neglected to mention her varied and numerous enemies, or the forces moving to stop Anna in her quest!

From Justin Jordan (STRAYER, Green Lantern: New Guardians) and Eleonora Carlini (Batgirl, Doctor Who) comes the BRAND NEW series of magic, mystery and mayhem that is sure to appeal to fans of Harry Potter & The Chronicles of Narnia!

Jordan doesn’t wait for you to take a breath here. As soon as you start this issue, you’re invested in the world of “Backways.” You’re questioning why Sylvia is missing, you’re questioning what’s the deal with magic in this world, and you’re wondering who the heck Coyote Bones and Skin Horse are. It’s great world-building right from the get go and done right, you’re not going to get bogged down in exposition about the rules of this world, you’re just going to get caught up in the action of it happening, and it’s ultimately way more fun to witness.

And then you get to the premise. Jordan is working on a kind of post-modern gothic Harry Potter or Tim Burton style mythos here, using the idea a whole community of magic users and outcasts are operating in ‘The Backways’ of our community, beyond the gaze of the public eye. It’s not the most original concept but Jordan doesn’t try to play it off like it is. Instead, Jordan looks for ways to make it uniquely his own. There’s some great jargon used in the dialogue, things like magic being Knacks and Doodads, which bring a whimsy and old timey charm to the sinister nature of the issue. On top of that, the rules for using magic seem to work more like “X-Men” or other superheroes: each character  is granted a unique gift, which bring a mystery element for when you run into a new character to the table.

What’s great with this comic is how tough our protagonist, Anna, is. Firstly, it’s great to have a female protagonist working as an idyllic role model in the young adult fantasy genre and Anna proves she owns the role. Jordan portrays her as essentially unbreakable in this first issue: Sylvie’s mother barrages her with insults first, then she’s forced to look through the streets and run into mystical strangers in her attempt to find her friend. Through all of this, she retains the same steely determination, whilst also showing moments of levity, already making her an interesting character. The rest of the cast isn’t as layered as her, proving more to be obstacles or mentors to Anna at this point. However, Coyote Bones is charismatic and interesting, subverting expectations by starting out as another roadblock to Anna before helping her out towards the end of the issue.

Prior to this, I’d only seen Eleonora Carlini’s work on “Doctor Who” comics, so I was pleasantly surprised at the quality presented in this issue. Carlini has a cartoonish style that blends the speed of comic books with gothic, Tim Burton-esque aesthetic. This is best represented in her setting and environmental work. The world Anna resides in is similar to ours, but with a more claustrophobic, high volume and creepy feel. You can never quite see the sky in Carlini’s rendering of the city, and Anna only travels down low ceiling corridors or creepy alleyways. It also helps that all the buildings are architecturally old, adding to the feeling of dread. It’s a small touch that supports the creepy tone that Jordan wants to convey in his script.

The character action is high-octane and fast here. Once again complementing the script’s pacing, we never see any of Carlini’s characters static, they’re always in motion, working well to create a sequential, never ending tone. There’s a great single page that represents this about two-thirds through the issue: Carlini draws Anna moving through an attic, to an alleyway, and into an old mansion, with multiple copies of here moving through each panel to give us a driving sense of momentum through the page. All this character action would be nothing without making each character look emotionally authentic, and Carlini portrays this well. From Sylvie’s mother’s obvious resentment of Anna at the issue’s opening, to Coyote’s sinister yet knowing smile, and Skin Horse’s wrinkled, loosely hinged grin, each character beams with personality and none look exactly alike.

Aptly named Silvie Tidie makes this issue glow with beautiful color. The whole story has a very ethereal look about it that we wouldn’t get without Tidei’s contribution. It’s in the city’s setting, with the sky a constant, purple hued night, and in the eerie green, yellow and blue lighting of different intreriors, subtly telling you that there’s something magical about this world of Anna’s. There’s some nice little changes too that work with Jordan’s characters in the script – for example, when we are first introduced to Coyote Bones, she has an ominous purple glow around her, and the reast of the scene is lit by the same color. However, when she comes to cave Anna later in the issue, the color scheme is a more optimistic yellow, suggesting to the readers through visual cue that this is not the same adversary Anna faced before. It’s little touches that really show the importance of the colorist, and Tidie works wonders with them on this book.

“Backways” #1 is an issue that came out of nowhere for me that I was pleasantly surprised with. Jordan’s stumbled onto a whole new world of gothic magic here, with great characters and premise, while Carlini and Tidei bring it all to life with wonderful yet weird artwork. Aftershock Comics are showing no signs of slowing down their great debuts, so make sure you keep an eye on this one.

Final Score: 9.0 – A great, YA occult style story with fantastic character work by Justin Jordan, fast paced artwork by Elenora Carlini, glowing colors by Silvie Tidei, and solid lettering by Marshall Dillon. This is how you build a world.