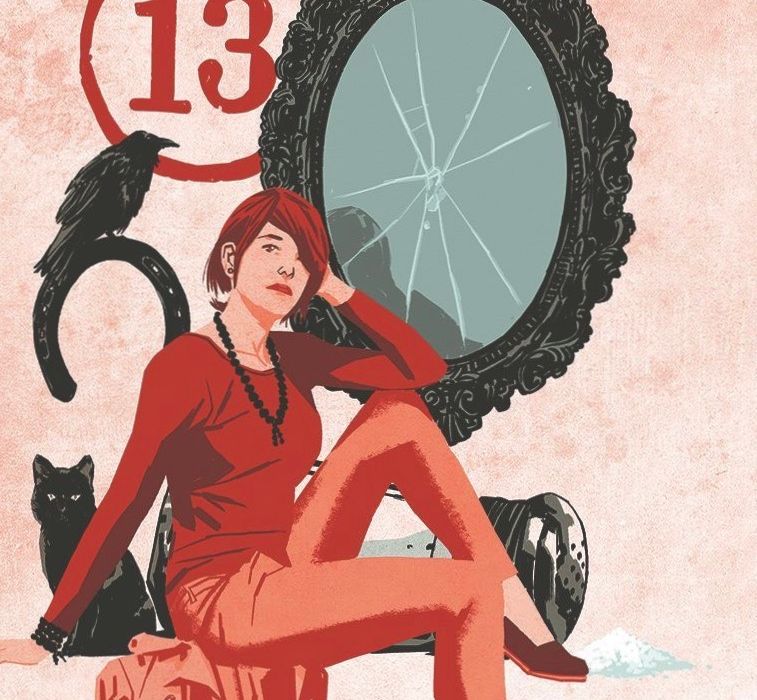 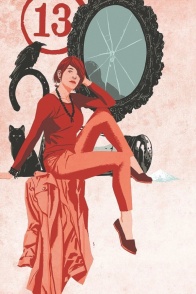 A broken mirror gets you seven years of bad luck. Salt was thought to have the same preservative effect on friendship as it had on food, so spilling it was a bad omen. We all know a black cat crossing your path is bad luck, but did you know an upside-down horseshoe represents good fortune spilling out on the ground? Charlene ”Chuck” Manchester hires out her bad luck, providing disaster where someone else can profit. While her enemies rally to take her down, Chuck sees a way out with her new heiress sidekick. But sometimes her own bad luck is not enough, and Chuck needs to really tempt fate to pay the rent . . .

The central premise of “Bad Luck Chuck” is simple but intriguing. In the second issue of the series, the titular character – Charlene “Chuck” Manchester – describes it like this: “I have exceptionally bad luck. And I can make it so much worse.” Of course, this being 2019, the primary reason to make her luck worse is to monetize it somehow. It’s not exactly the next predictable step in the gig economy, but it totally makes sense. Like young people everywhere hustling to make ends meet, Charlene has turned her distinctive skill set – and otherwise unenviable fate – into a revenue stream. “Disaster on Demand,” she calls it, and so far it’s working well. Perhaps a little too well.

Enter Ean Sterling, a Raymond Chandler-esque insurance investigator with “reasonable suspicion” who is determined to shut Chuck down. After forty-seven “accidents” in fourteen different cities over the past eight years – all of which happen to be mysteriously connected to Tashi Charlene Manchester – Sterling is closing in.

And that seems like more than enough to hook the reader and launch an exciting new series. Two great characters, a pretty unique storyline and plenty of mystery and intrigue. Unfortunately, writer Lela Gwen feels the need to keep upping the ante and packing the story with other characters and a sub-plot (or maybe it’s the main plot?) that increasingly pulls the story away from what appeared to be the book’s core dramatic action.

The debut issue covered a ton of ground, but it still felt pretty compact. Even as multiple characters made their entrances and two separate plotlines vied for the reader’s attention, the story kept driving forward. There were lots of details to track, but all of them felt important – titillating, even – not extraneous or unwelcome.

“Bad Luck Chuck” #2 doesn’t feel nearly as well balanced as its predecessor and it’s definitely not compact or self-contained. More than once I found myself needing to reference the first issue in order to appreciate the significance of a certain plot point or even clearly remember who is who. In many ways it’s refreshing and even admirable that Gwen and illustrator Matthew Dow Smith don’t feel compelled to be overly explicit and lead us by the hand. Frequently, however, their subtlety yields momentary confusion and a story structure that too often feels unnecessarily choppy and disjointed.

Exacerbating this problem – or maybe because of it in the first place – is how much this issue slows down in an attempt to show us that Chuck’s hard exterior merely masks her tender heart while also particularizing the various sub-plots and underscoring the fact that the number 13 is super, super unlucky. Three separate flashbacks highlight the evolution of Chuck’s motivations as she moves from petty grift to wielding her powers for good, but they all feel pretty redundant. The impulse to “show, don’t tell” is almost always a good one, but in this case it feels like all of that information could have been communicated in a few lines of dialogue. Instead, these flashbacks consume a full 6-7 pages, pulling us out of the present and bogging us down in the past.

For the most part, the art works really well and is definitely one of the highlights. Smith’s dynamic inks and heavy blacks, coupled with Kelly Fitzpatrick’s desaturated, earthy palette, give the book a gritty, raw, almost retro feel. Indeed, the overall visual mood references a monochromatic, hardboiled detective aesthetic, but it also breaks free of those constraints to give the book a fresh and contemporary appeal. Ironically, one of the book’s best sequences, in terms of both line and color, appears in a flashback as a character we’ll likely never see again unwittingly destroys his office while practicing his golf swing. Ultimately, it’s not central to the story, but feels like it should be.

In the end, there’s a lot to track and unpack, especially considering we’re just on the second issue. The central story that seemed to emerge in issue #1 appears to have morphed into something else. I’m sure the intention is to weave the various strands together to reveal a bigger story, but at this point it’s difficult to differentiate between truly important details and those that merely add nuance.

Honestly, it often feels like I’m not really sure where to look. The water bottles? The French fries? The waitress? None of the above? There are lots of open questions, avenues for exploration and potentially interesting themes. Of course, a certain level of mystery can be quite compelling. The book ends on a killer splash page and in general the series feels well positioned to really hit it’s stride, but I’m also a little confused, like I don’t have a good handle on things. So far, that ambiguity keeps me from feeling fully engaged.