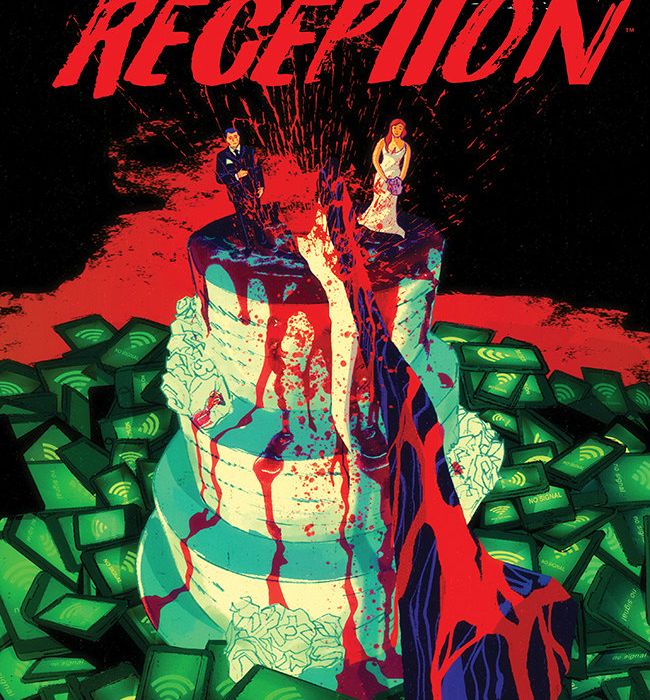 Social media is one of the most hotly debated ideas of the modern age, with plenty of pros and cons that keep each other very carefully balanced. Horror fiction like Black Mirror hasn’t been afraid to capitalize on that fear, as the real-life uncertainties continue to grow each day. Let’s see how creator Juan Doe handles this idea in his new series from Aftershock, “Bad Reception” #1. 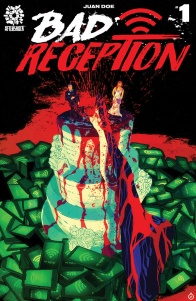 It’s the celebrity wedding of the century, set in an undisclosed, remote location, with no access to wifi, cell phone reception or the outside world. But the dream wedding becomes a nightmare when, one by one, the guests are brutally slaughtered by a mysterious killer who brands his victims with a hashtag.

Doe plays well upon insecurities of the modern age here, providing a lengthy radio interview to start off his book. The segment can drone on a little bit at times and may seem to ward off potential new readers, but gives us a good look into the psyche of our protagonist Blaise, his concerns with social media and what he aims to do about them. Each page is balanced with enough word balloons that we’re given ample information yet we drip-fed just enough to push ourselves right into the heart of the book. Speaking of Blaise, he’s an especially interesting character as someone who claims to be a humanitarian. However, Doe effectively rewards careful readers by putting little instances in his dialogue and art, and an especially revealing letter towards the end of the issue, that show Blaise has some much more sinister motives underneath it all.

The formate of the issue from the point after the interview is entertaining, but fairly stock standard as a setup. We get a scene for everything to spring from, which establishes the trite but endearing relationship between Blaise and Gaia, his fiance in this off-the-grid wedding he’s planning. Doe’s characterization for Gaia is entertaining, as she also seems to be holding onto a facade of modern innocence, exclaiming LOLs and pretending to vanity whilst she holds onto a trump card that will completely disrupt the nature of the event. The rest of the book falls into a more repetitive motion, of Blaise and Gaia meeting with their friends to extend invitations in double-page scenarios over and over. Whilst it’s fun to see each character set up with unique personalities, my personal favorite being the effervescent Damaris, it wears thin pretty quickly to know that you’re in for meeting another person every time the scene changes. Doe does do a good job at establishing the potential importance for each character down the line, which kept me hooked to see this through to the end.

Doe’s art style values style over substance in the most visually literal way, and I love it. The linework is super-restrained in most panels, leading to more of an emphasis on the warm blocks of color to provide emotion. Interestingly, the most detail we get in a character might be the very first shot of Gaia’s dead body laying with her phone in her hand, as Doe renders her with classical attention to detail. Still, Doe’s simplistic style does a lot of character development on its own. Gaia might be the best character in this story because Doe gives her such a wide array of emotions and scenarios to work through. I love Gaia when she’s despairing about going off the grid, as much as I love her when she’s wearing a hoodie to sneak up on Damaris or casually eating a pizza with a trucker hat and ponytail hairdo.

There’s a great sense of unease that builds throughout the book, however, through Doe’s clever usage of page real estate. Right after the radio interview segment, the entire bottom third of every page is dedicated to the panning of an ominous landscape, presumably the place where the wedding will be held. The storytelling in this is just as good, if not at times better due to the lack of dialogue. Doe cleverly sets the stage when he drops in the inclusion of a pure-white stag amidst the dreary, stagnant surroundings, which could be read as Gaia’s innocence as she trudges through the sinister machinations of Blaise’s planning. As the scene moves on, the stag is shot through the eye, another visceral image with plenty of potential implications, before we see a man pick up the corpse and drag it through the woods to his cabin, before skinning it in an extended, gruesome sequence and smearing its blood in a hashtag symbol over one of Gaia’s Instagram photos. This scene is filled with so much clever storytelling and the decision to leave out dialogue whilst running it against the rest of the book gives it so much more depth and potential for many-layered meanings.

Doe’s colors throughout the book range from stark, aggressive blocks to warmer, friendlier gradients. The former works well throughout the book to show the more violent nature of the issue, especially with the contrasting, vibrant blues and reds that make up the underlying woods scene. Doe also uses these block colors well to implicate the nature of one of the characters being met in a scene. The scene between Blaise and Gaia is full of warm, passionate oranges, that are muted enough from being totally red to signify some ulterior motive between the characters. The scene between Damaris and Gaia is a muted, older green that seems to show the nostalgia between them as old friends. The scene between Blaise and Jurek is a much more aggressive red than the first scene, evoking Jurek’s MMA background and the potential for something to go wrong as he discusses his girlfriend being less willing to give up her phone for 24 hours.

“Bad Reception” #1 may be a little formulaic in the way that it’s structured as a debut, and can be a little off-putting in the way the first scene works, but this is a book that succeeds incredibly well through its visuals. Doe’s art is simplistic in nature, yet does a lot of heavy lifting with developing characters and creating a dark yet intriguing tone that builds throughout the entire book. This is a series with a lot of modern relevance and I’m already intrigued to see how it pans out.

Final Score: 7.4 – “Bad Reception” #1 is a little formulaic narratively but its stunning visuals help it to stand out from the pack.