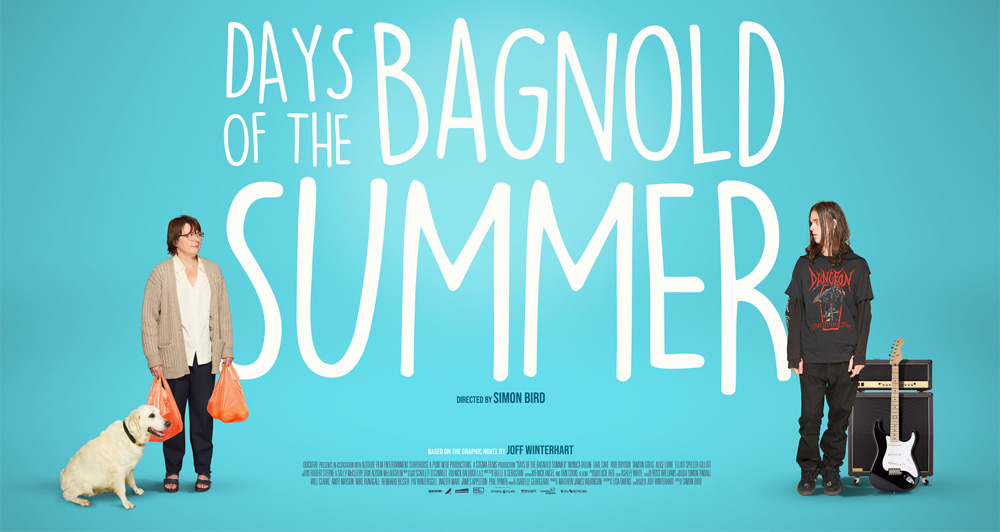 Based on the graphic novel by Joff Winterhart, Days of the Bagnold Summer marks the directorial debut of British comedy actor Simon Bird, as well as the first screenplay by author Lisa Owens. A pleasant comedy-drama, the film stars Monica Dolan as librarian Sue Bagnold, and Earl Cave as her teenage son Daniel, who are forced to spend the summer together after his expat father cancels Daniel’s arranged visit to the States. The two are both introverted but in completely different ways, and it’ll take them a long time to realize it, between Daniel’s inability to muster enthusiasm for, well, anything really, and Sue dating his history teacher Mr. Porter (Rob Brydon).

Bird displays a quiet confidence behind the camera, with the cinematography by Simon Tindall largely eschewing close-ups in favor of wide shots: it’s a sly conceit, resembling the horizontal composition of a comic strip, and reflecting the lead characters’ physical and emotional distance. The unbroken takes make us really feel we are at the Bagnolds’ home, and helps the dialogue scenes feel of a piece with the landscape shots of the countryside: safe to say, if the COVID-19 pandemic had not deprived the film of a theatrical release, it would’ve still felt at home on the big screen.

Dolan is great as Sue, perfectly embodying that mild-mannered friend every British woman seems to have. It’s a lot of fun following an older woman like her trying to restart her love life, and Alice Lowe is appropriately dynamic as her sister helping her prepare for dates. The movie’s main challenge is ensuring Daniel remains sympathetic throughout, which is easier said than done given he is a withdrawn, lazy, and aggressive looking young man, frequently prone to making unpleasant outbursts towards his mother.

Bird is always careful to remind us Daniel feels bad about these moments, but is simply unable to articulate his real issues with his father, or to simply move on briskly to a more comedic scene or moment, so the bitter taste doesn’t linger for long. It’s perhaps unsurprising that Bird feels more comfortable with the comedy than the drama: Daniel’s falling out with his sole friend, Ky (Elliot Spencer-Gillott), is very much played for laughs, although the hilarious twist involved reminds us that, despite his height, he’s still a kid, and so helps extend our empathy from Sue to him.

As the film continues, you start to remember your own conflicts with your parents, and perhaps your own struggles making friends. Despite Daniel’s phone, there’s a timelessness to the movie: it could’ve taken place 10-15 years ago, or during the ‘80s. This nostalgic quality is reinforced by the soundtrack from Scottish indie band Belle and Sebastian: their presence is ironic given Daniel’s a metalhead, but they perfectly embody this gentle and laidback approach to a mother-son story — one delightful moment even deploys a cover version of a classic ballad, adding to the wistful filter through which everything is viewed.

One criticism some may have is that the supporting cast feel underused: Brydon is pretty charming as Sue’s love interest, but disappears during the second half, while Tamsin Greig, who plays Astrid (a yoga instructor and Ky’s mum), doesn’t get enough screentime to make it clear if her character is meant to be sincere, or a gently amusing hippy stereotype. However, their characters ultimately make sense, and besides, this isn’t a vehicle for these highly recognizable actors (at least in the UK): it’s for Dolan and Cave, and their characters’ interaction.

Perhaps the primary flaw in the film is that the pivotal points in Sue and Daniel’s reconciliation are too subtle, and so the change in their relationship feels somewhat abrupt; its definite flaw is that the roles for non-white actors are too limited — and Bird and Owens presumably know it, given the cameo appearance from Indeyarna Donaldson-Holness as Sophie, a friend of Daniel’s cousin Katie (Grace Hogg-Robinson). Ony Uhiara has no lines as Sue’s colleague Esther, and even the extras are all white — like too many indie films, the film accidentally presents a very white vision of the world, which is inappropriate after Brexit.

Otherwise, Days of the Bagnold Summer is a perfectly fine and funny film, and definitely doesn’t overstay its welcome at only 90 minutes: I look forward to seeing what Bird and Owens have planned next. It is available to buy or rent on most streaming platforms in the UK and Ireland right now: a US release date is (much like Daniel’s postponed trip to see his father), still unconfirmed.