The more I read of this series, the more nervous I get. Doom is brewing… 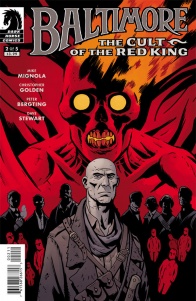 Lord Baltimore’s search for the Red King continues, but an ancient evil that threatens the world has its grip on Baltimore’s closest friends. Will they be able to survive its wrath?

In the previous issue of this arc, Baltimore and his company had been split in two. Simon Hodge, Captain Aischros, Dr Rose, and Mr Kidd set off for Carthage, the city where the Cult of the Red King began, while Lord Baltimore, Judge Rigo, Thomas Childress, Sofia Valk, and Harish headed to Saint Petersburg to investigate a coven of witches. At the end of that first issue, I was left with the feeling that one of the main characters wouldn’t survive this arc. After issue two, I’m starting to feel like we might be lucky if only one dies.

Childress is the one I’m most worried about. As Sofia pointed out to Baltimore in the first issue, he is Baltimore’s last link to the man he used to be before he met the vampire that ruined his life, yet Baltimore seems almost estranged from him. Childress and Baltimore are on this quest together, but not as childhood friends in the eyes of Baltimore. When Childress realized this, it hurt him, and he recklessly put himself in peril shortly after.

Baltimore has been a loner in the series for a long time, and even in company, he’s all business. However, being around the group seems to be affecting him. We’ve seen glimpses of him alone, feeling what he’s lost. He knows he’s cold and cut-off from people, and while he was hunting Haigus, that made things easier, but he’s drifted so far from who he used to be, he doesn’t know himself any more. 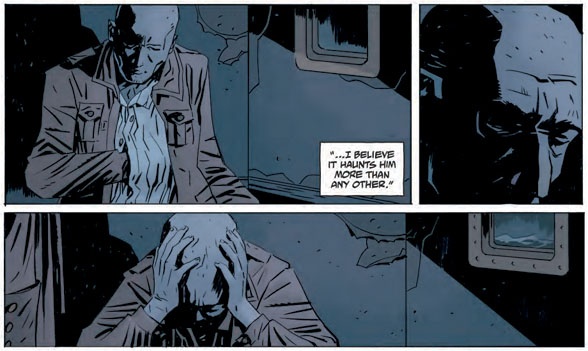 My point is, he needs Childress.

Meanwhile Childress has thrown himself into the waiting arms of a woman called Zoya. Clearly she’s bad news, especially since after their first night together, she carved a wooden poppet of him, and ever since Childress won’t be parted from her side. I get it, she’s a witch, she’s bad news, but this is probably the weakest part of the story for me. The evil demon seductress trope is not one I particularly enjoy. If it shows up in a story, I’d prefer this trope to be deconstructed a bit, rather than treading the very well-worn path it’s been down thousands of times before.

And maybe that’s what Christopher Golden has in mind. Right at the beginning of this issue, the characters start talking about the change they see in Childress and the threat Zoya might be. Judge Rigo goes one step further, drawing parallels between Zoya’s influence over Childress and what he perceives to be Sofia’s influence over Rigo. Sofia points out how offensive his implications are though, and Harish is quick to see where the real danger lies… in Judge Rigo’s misogynistic attitude. This is only issue two, and I think Golden could do something interesting with the elements he’s put into play.

Plus, this scene made me like Harish and Sofia more. I don’t know much about Harish, but the way he interacts with Sofia especially, always reveals glimpses of an interesting character. He won me over the second Sofia joined the group in “The Witch of Harju” and his immediate reaction was to treat her as his equal, and give her a knife for the fight ahead. Hopefully he survives this arc so he can get a story that explores him further.

From “Baltimore: The Witch of Harju” #3.

And see, that’s thing with these characters, Harish, Sofia, and Rigo, we’re still getting to know them and there’s so much potential for them to develop, which in a way kind of makes them feel safe. Safe is a relative term, of course. I mean, they may be scarred and maimed by the end of this miniseries, but I think they’ll all survive it, because there’s so much still to explore with them.

But the other group, Simon, Kidd, Rose, and Aischros, I feel like any one of them could die. They don’t have any major dangling plotlines at the moment, and I’m invested enough that their death would hurt. This issue, they come up against some nasty stuff in Carthage, and with this only being issue two, you just know the worst is yet to come. Man, we just got Simon back, and Rose and Aischros, while a prominent part of the “Baltimore” novel, haven’t really been utilized in the comics yet. Kidd… well, I barely know him. I guess I wouldn’t feel too bad if he died. He sort of seems like the red shirt of the group at the moment.

But look at this. The creative team on this series has got me fretting over the possible deaths of its characters. The got me invested. That’s good writing. And I guess there’s always the possibility everyone will survive. (Who am I kidding? Someone’s going to die…)

On the art front, I love what Peter Bergting’s doing. I said as much in my last review, but it’s as true now as it was then. He knows how to make this world feel big, and given the way he drew the witch in “The Witch of Harju,” I have high expectations for the witches of Saint Petersberg. The wraith creatures Berting drew in this issue were fantastic in that they didn’t seem completely solid. They were like torn cloth, like strips of paper, like flame, and like shadow all at once. He knows how to play up the more fantastic elements of the story, and it seems like this is just the tip of the iceberg. Going ahead, I get the sense that “Baltimore” is going to delve further into the grand fantasy elements that have only been hinted at before.

Again, this was an issue that ended too soon. The series has reinvented itself substantially of late, introducing new and exciting elements, while keeping that core essence of a “Baltimore” tale. I am already impatient for what comes next.

Final Verdict: 8. Another solid entry in what could be the best “Baltimore” miniseries yet.

By the way, if you haven’t read the original “Baltimore” novel yet, Dark Horse will be releasing it in a new paperback early next month. Find out how this story began. 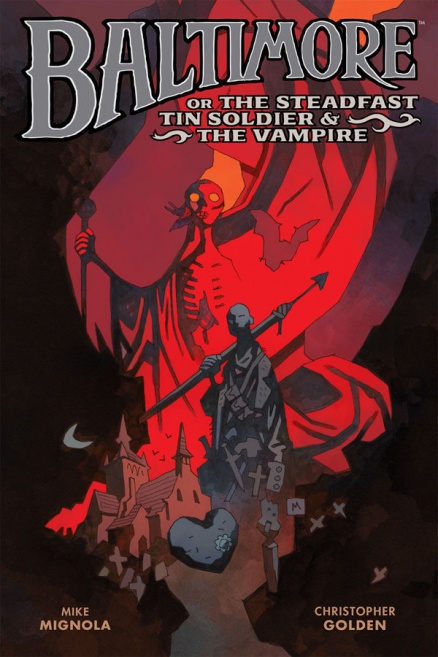