Like the last, this is a quiet and meditative issue with a somber mood hanging over it, exploring what each character brings to the graves of their fallen companions. 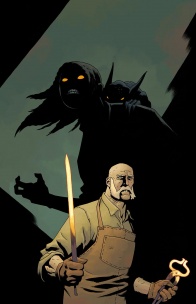 Before Baltimore and company set out for Constantinople to hunt the Blood Red Witch, old friends are buried and they prepare to face their own graves in their hunt for the Red King.

I know this is the second part of a five-part story, but it really feels like the second part of a two-part story to me. Or rather, a single chapter divided in two simply because it didn’t fit in one issue. Both issues are essentially one long conversation as the characters lay their fallen companions to rest. With that in mind, I recommend quickly revisiting the first issue before reading this one. You’ll get more out of it that way.

This also means it’s very difficult to talk about the issue without mentioning spoilers. Normally I save the ridiculously spoiler-filled review for the last issue of a given arc, but in this case I’ll make an exception. You have been warned. Skip to the end for the verdict.

As expected, this issue explores the past of Mr. Kidd. Each of Baltimore’s companions came to him through past suffering, suffering that allows them to face the reality of the Red King, and Mr. Kidd is no different.

The thing is, we don’t really learn anything new about Mr. Kidd here that we couldn’t have already guessed from ‘The Cult of the Red King’. Like all Lord Baltimore’s companions, Kidd has suffered at the hands of fate and the supernatural. The tale is familiar, especially similar to Baltimore’s and Sofia’s who have also lost spouses—I didn’t really need to see another spouse die, or at the very least I wanted something else out of it. At a certain point the sameness of these tales works against the series. It’s simply another sad story, and after it we see Kidd the same way we did before. Nothing has really changed. I would have liked his tale to reveal something about him, and perhaps at the end of it his companions would see him a little differently, and perhaps even understand why he’d only ever told his tale to Simon.

That said, despite the familiarity, Kidd’s story is beautifully told. In particular, the visual touches are very thoughtful. Mr Kidd’s tale happened to him as a much younger man, so there’s an interesting visual contrast between who he was, and who he has become. In his youth, Kidd’s mustache has a slight upward curl, like a smile, but throughout his tale, as matters darken and rain falls, the curl vanishes. The modern Kidd’s mustache is has no such curl, giving him a permanent air of sadness.

Kidd’s story is told to Captain Aischros’s grave. In life, Captain Aischros had never heard Mr. Kidd’s tale, though he had asked him for it. That’s really the heart of this issue. It’s about what each character chooses to bury. There’s a particular moment in this issue that jumped out to me, when Sofia mentions a prank Childress and Baltimore played on Baltimore’s sister when they were children. It brought a simple reality to his loss that I appreciated. Baltimore lost his parents, his sister, and his wife to the vampire Hagis, but the focus has often been on his wife. For me, this simple acknowledgment of his sister, someone that had known him as a boy playing pranks, makes his loss much more stark than it has ever been before. Sofia’s smile at remembering the tale and Baltimore’s reluctance to speak about it says so much about the parts of himself he has already buried and given up on.

Baltimore only desires death, and until that changes, he is truly doomed. This is why I admire Sofia so much, because she tries to awaken a side of him that he believes he has lost. There is still a spark of the man he once was still alive in him, even if he won’t consciously acknowledge it. Baltimore won’t allow himself hope, and that seems to have infected most of his companions too. They speak of the grave as if they are all on borrowed time for standing with Baltimore, and certainly that is likely their fate, but it is disturbing that they don’t even seem to hold a glimmer of hope for themselves.

Rigo is the exception. He sees the work that must be done, but he also dares entertain the possibility of another life for himself. Honestly, I think Rigo’s misguided, but in this matter he does make some good points. The thing is, Baltimore is a blunt instrument in this battle against the Red King. His approach is relentless, but always from the same direction. Having companions with differing methods and opinions has become far more interesting to me than the endless battle with the Red King. Baltimore’s hopelessness has a toxic effect on those that follow him, and as misguided as Rigo is about everything else, he seems to see this plainly.

The conversation between Sofia and Rigo earlier in the issue made my skin crawl. He’s only ever been disparaging toward her, and at times even casual contempt. That he could even entertain the idea of Sofia running away with him is creepy as hell. He completely lacks self awareness.

I feel badly for Dr. Rose in this issue. After all he’s been through with Baltimore, I think he deserves some connection. He seems dangerously close to the same emotional state Childress had been in at the beginning of ‘The Cult of the Red King’, feeling shunned by Baltimore, and we all know how that ended. I don’t think Rose holds any hope for himself, and he’d prefer to learn his friends’ stories while he’s alive, not have them told to his grave.

And that’s all for spoilers.

This issue is a quiet character study. I could go on about what I see in each of the characters, but ultimately I think that defeats the purpose. This is really about what you, the reader, see in the characters, and how much you enjoy exploring them will ultimately determine how interesting you’ll find this issue. If you’re more action orientated, this one may leave you cold. For me, this is the sort of thing I enjoy.

Final verdict: 8. I like where this issue leaves things. I’ve plenty to mull over while I wait for the next one.