The story shifts gears as Lord Baltimore and company arrive in Constantinople, a city tearing itself apart. 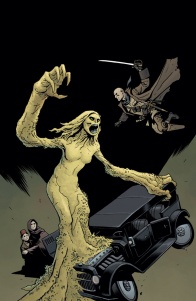 Baltimore continues his journey to Constantinople, where his search for the Blood-Red Witch leads to the royal family.

In my last review, I noted that issues one and two felt like a self-contained story. After reading this issue, that comment seems even more appropriate, as this issue, even though it’s the third part of five, feels like the first issue of a new story. It’s not completely disconnected from the first two issues, but it’s a very different beast from the issues that preceded it, especially in terms of tone. This isn’t a bad thing, by the way, but I think it’s something worth noting about it’s structure. This issue has a lot of setting up to do, and yet it’s also the third part of a story, so there’s also a lot of action in there. There’s a juggling act going on here between necessary exposition and action.

For the most part, it works. The sequence depicted on Ben Stenbeck’s cover is an example of this clicking. Bergting’s design work on the monster is fantastic, the action is swift and creepy, but it also establishes the political climate of Constantinople. My only complaint about the sequence was that I would’ve liked a few panels of silent stillness, because when the characters speak, it has the air of a prepared speech, instead of a reaction to what they’re witnessing. It makes them feel disconnected to what’s going on around them and what they’re doing. They broadcast their thoughts and feelings instead of thinking and feeling them. In particular, Marchand’s character suffers the most from this. He’s still relatively new to readers and I would’ve liked to get a feeling for who he is, and see how Sofia responds to him.

That said, this issue is packed, and this could simply be the result of not having enough pages for the content. Or perhaps, this is one of those moments where the experience of the pacing in single issues will be considerably different than when read in the hardcover collection later. Reading this whole story in one sitting, perhaps this increased pace will work to the story’s benefit, and the emotional resonance will come from the lingering effect of the previous chapter.

A later sequence in the issue does not weather the exposition as smoothly though. Unfortunately it suffers from a villain that talks too much, conveniently revealing certain aspects of the plot to our protagonists in a way that didn’t feel earned. Perhaps the villain has a good reason for being so chatty, but if that was the case, it didn’t come across. Instead the villain seems to want to keep their secrets, and yet gives them up at the slightest provocation.

However, the action in that same sequence was expertly handled. I don’t want to say too much about about it, because it is something you really need to discover on the page. Bergting draws the hell out of it, and even when the characters are only talking, his staging ramps up the tension and finds focal points for the action. There’re a lot of characters in these scenes, but they never feel cluttered. Bergting maintains a clear sense of direction in a confined space.

The high point of this issue was Bergting’s design work. I already mentioned the creature from the car attack, but there’s also a panel in there full of monsters from the old world, and he unquestionably nails it. He knows how to push a design so that it feels at home in both fantasy and horror.

I want to take a moment to mention Michelle Madsen’s colors in this issue. Dave Stewart is normally the colorist on this series, and he did the first issue of this mini, but due to scheduling difficulties, he couldn’t do the rest. So Madsen took up the mantle and well and truly delivered. I love that Lord Baltimore and his company are in Constantinople to hunt the Blood-Red Witch, and right there in the first panel, the sky is blood red.

Madsen has clearly been very attentive to Stewart’s coloring conventions for this series, especially with panels looking back at the ancient world. The transition is very smooth indeed.

OK, let’s wander into spoiler territory for a bit.

Setting aside the central conflict of this story, the B plot focuses on Dr. Rose as he tries to decipher the writings from the First Temple of the Red King. This introduces Professor Murad, a character with considerable knowledge on the topic, and so he readily accepts the reality of the Red King. Most likely he’s a means to an end in terms of the story needs, and yet his interest in the Red King seems personal. He may not be a warrior, but I could see him joining Lord Baltimore’s company, though perhaps for very different reasons than the other companions. One mention of the First Temple, and Murad was already considering making a journey there himself. Would he perhaps join Baltimore’s group to further his own knowledge on the subject of the Red King? He’d certainly be an asset, but I could see how his motives could potentially be a liability later on.

Of course, this is idle speculation, but there’s certainly a gap in the group at the moment that someone with his expert knowledge could fill.

This issue had a lot to accomplish, and perhaps suffered from not having enough space to get the most out of each scene. While the action sequences were excellent, the characters often behaved in ways that seemed motivated by a need to turn the cogs of the plot. While this works for Lord Baltimore himself due to his mechanical and focused nature, the portrayal of the supporting cast, especially newer members, suffered as a result.