Lord Baltimore, Sofia, Harish, and Marchand have gone to talk to the Masters of the Ancient Wisdom, three dead guys that are apparently going to rise up and take their place as new priests of the God Before Gods (you know, the Red King). So obviously very bad things are going to happen. Oh, and just for good measure, Baltimore and co. killed the Red Witch’s mother in the last issue, so you just know she’s going to show up and make trouble. 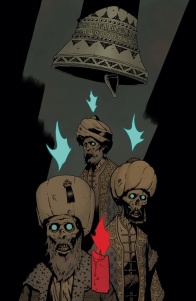 Led to a sultan’s tomb in their search for the Blood-Red Witch, Baltimore and his companions get answers from unexpected sources that will lead them not only to the witch, but to the Red King as well.

OK, first, the most important thing to mention: I love the way Peter Bergting drew the Red Witch in this issue. He really pushed her movement in a way that sells her shifting and changing. I was reminded a little of the way the tainted boar gods were animated in Princess Mononoke at one point. It’s things like this that I get a real kick out of, so I’m always grateful he’s on the book.

Overall though, this issue is a little tricky to talk about. There’s a big reveal at its core and I feel like the issue noticeably improves once it gets that reveal out of the way. The problem is all that’s in the spoiler-filled section below, so the spoiler-free portion of this review is far from representative of the issue as a whole.

Both this issue and the last are primarily driven by a question: Who is the Red Witch? It’s a mystery story. The problem with that is that Lord Baltimore isn’t a very effective detective. His plans amount to ‘track down the thing, then kill it’. Similarly, his method of interrogation is ‘bark a question and threaten violence until you get an answer’. And when he does get his answer, he takes it at face value.

In this issue and the last he’s been lucky to have prideful or boastful subjects to hunt and question. Baltimore essentially stumbles through the mystery to arrive at the final reveal merely by virtue of still being alive. Baltimore is never sufficiently engaged by the mystery, and that lack of engagement affects the reading experience because we never get swept up in the mystery either. It just seems a big stiff or mechanical.

It’s clear big things are being set-up for the future (both the next issue and the next miniseries), but sometimes this issue (and the last) struggle under all that exposition. Structurally the approach to the overall arc of this miniseries seems to be at odds with the approach to individual scenes. The overall plot is a mystery, so there are misdirects and reveals which complicate the path from beginning to ending—the overall story takes an indirect approach. Yet the approach for individual scenes play out in a very direct manner. This mismatch is where I have trouble engaging with the story.

And yet there’s another layer to this that I like. The story is very aware that Baltimore is ineffective—that’s part of the point the story is making. This is what Judge Rigo was talking about in issue 2. Again though, I’ll have to talk about this properly in the spoiler section.

The bulk of this issue revolves around the chat with the Masters of the Ancient Wisdoms and the story of the Red Witch’s youth. Ben Stenbeck’s cover teases this sequence and does an excellent job of it too, but when we get to the sequence in the issue it’s a bit too conventional in its approach. This is the backstory of a major antagonist in the series, and yet it feels like a missed opportunity to create something more unusual. After all, Baltimore and his companions are standing in an ancient crypt being told a tale by three dead guys with blue flames that show visions of the events being discussed—there are so many elements there to play with and yet the flashbacks play out like any other, through narrated sepia-toned panels. This sequence does it’s job, but it doesn’t make much of an impression, which is not how I’d expect to describe the Red Witch’s backstory.

Where this issue comes to life is in its second half, but before I talk about that I need to warn you that there are major spoilers from here on.

I think it’s clear reading this issue that the creators find the Red Witch a compelling character. However, she’s kind of been kept on a leash to keep it secret that she’s Madame Blavatsky. The story is structured around this reveal, but as a reveal I found it lacked punch. As I said above, I wasn’t sufficiently engaged in the mystery. However, once the reveal is out of the way, the Red Witch lets loose. She becomes a much more feral force than before.

And this is where Baltimore’s impotence as a protagonist comes in. It’s been a running theme throughout this miniseries. Baltimore is a blunt tool for a task that increasingly requires a more surgical approach. He gets the job done, but with a lot of collateral damage and luck. His bloody relentlessness and invincibility was all he ever needed when he was hunting revenant vampires, but he becomes less and less effective as he moves up the hierarchy of supernatural creatures. What can he possibly do against the Red Witch?

Seriously, what? He can’t shoot or stab her, and that’s all he knows what to do. If you ask me, before this arc is over Lord Baltimore is going to catastrophically mess things up. The series has been building toward this since the beginning of the last miniseries, “The Cult of the Red King”. Whatever plans the Red Witch has for Childress’s corpse, I don’t think Baltimore’s going to stop them because he’s still the same man he was when he set off after Haigus. If he’s ever going to fight this evil, he needs to be more than that.

The thing is, there’s not really much tension in Baltimore’s fate. The guy is basically invincible, so it’s not really his fate we worry about… rather it’s the fate of his companions where the real tension lies. Harish, Sofia, and Marchand are all very mortal, and it’s their mortality that makes them so interesting. (I am very concerned for Marchand after this issue, by the way.)

If Baltimore dives headlong into a bunch of his foes, you know he’s going to emerge covered in blood, but OK. If Harish does that, you get concerned. More importantly, Harish wouldn’t usually do that. Baltimore’s companions have to find other ways to solve their problems and find other sources of strength. Like when Sofia is nearly ensnared in the thrall of one of the Masters of the Ancient Wisdoms; her strength is in that she has already had a hard life and weathered it. She’s tougher than she looks both physically and emotionally, and Morya grossly underestimated her.

I liked that Harish figured out the Red Witch was Madame Blavatsky, though I wish it had been more than a throwaway moment. It’s the sort of element that could have made the earlier half of the issue more compelling. Oh, and I loved that Blavatsky sees something to admire in Sofia. It’s a little thing, but it makes the villains more interesting when they’re aware of more than just Baltimore.

There’s a few bits in this last half that slow down the sequence a bit, like Blavatsky explaining that Baltimore and his companions killed her mother. It robs the Red Witch of some her presence (but only a little) and yet, this same piece of information could have fueled it instead. I kind of wish there’d been a moment before the Red Witch appeared for the big fight, one which had her go to her mother’s room and find her corpse. I wanted to feel her rage, not be told about it.

Most of this issue’s energy seems to stem from what’s ahead. There are a few moments when the author’s hand moving the plot pieces is a little too noticeable, but for the most part knowing that something is going to happen in the next issue creates an undercurrent of tension. I mean, those cutaways to Childress’s corpse aren’t there for nothing.

This is a difficult issue to evaluate in a vacuum since it’s clearly setting up a lot of different things for this arc and future arcs. The creators clearly enjoy having the Red Witch unleashed properly and that comes through in the exciting sequence that wraps up this issue. I expect big things in the final issue… Don’t be surprised if it’s a cliffhanger though.

Final verdict: 7. This is a good issue that appears to be setting up some very interesting things for the future…