Lord Baltimore gets the band back together again. 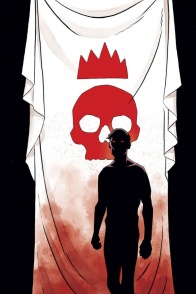 Protected by his armies marching on Rome, the Red King seems invulnerable as he takes his place at the Vatican for his coronation. How can the resistance hope to get close enough to confront him in human form?

After the last issue, I noticed some readers were confused by the timeline of the series. As the story began, it established Lord Baltimore had disappeared two years ago, and it seems at least some readers assumed this disappearance immediately followed the events of the previous miniseries, “Empty Graves.” Actually, it’ been a little longer. “Empty Graves” was set in 1920, whereas “The Red Kingdom” is 1925. The second issue makes this clearer, I think, as it fills in the intervening years.

And this issue has a lot of filling in to do. It’s all about laying the groundwork for the remaining issues, so there’s a lot of exposition here… However, I don’t have a problem with it in this case. Exposition isn’t always an evil. When it’s used to elevate tension or build drama, it can be a very effective tool, and that’s very much the case here.

In my last review I was talking around spoilers, so I never addressed the plot thread about Harish and Sofia’s relationship, one that had grown from platonic to romantic, and then soured. This wasn’t something I immediately liked, especially because it brought out a petty and jealous side of Harish’s personality. Even still, in this issue it proved to be a useful engine throughout Baltimore’s recapping of how he’d spent the last two years. Only Sofia had Lord Baltimore’s absolute confidence, and so every new piece of information is barbed with hurt and insult for Harish. The exposition was always working on more that servicing the mechanics of the plot; it revealed character too.

This issue has that labored ‘getting the band back together’ feeling to it, along with all the resentment you’d expect too. These characters have had some dark years. 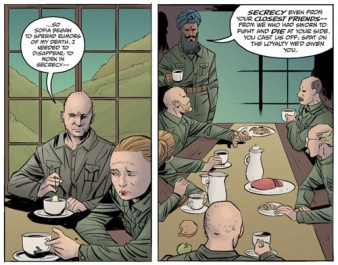 Art wise, this was a talk-heavy issue. There was a pair of scenes with Baltimore and others talking, and due to the sheer number of talking parts, the staging became a little awkward. For example, in one scene Baltimore and Sofia are at one end of the table and Mr. Kidd and Harish are at another. Both ends of the table have identical windows behind them, which means the background can’t be used to orient the reader in the scene, so the direction is established by who is sitting next to whom. However, if one end of the table had a different background, the contrasting backgrounds could have been used to orient the readers with greater immediacy, functioning on a more subconscious level.

There was another moment later when a group clustered around a doorway, then split in two as one half went outside while the other remained to watch and ponder motives. In this moment, the spacial relationships between these two groups becomes a little unclear. There are multiple conversations going on at once, but it’s not immediately obvious who is and isn’t within earshot of whom. The scene still works, and I daresay some readers may not even notice, but it was a moment I felt the layouts weren’t as strong as they could have been. The moment loses its immediacy.

But in the more dramatic conversations, no such problems exist. The scenes with the plague doctor were my favorite from the issue. The execution was excellent. Which brings me to another scene…

OK, I’m diving into spoiler territory now. Jump to the verdict if you haven’t read the issue yet.

…While reading the scene with the Red King talking to Madame Blavatsky, I immediately bristled. The Red King is a character that’s been looming over the story since the beginning. But the thing is he’s never really been a true character before—he’s more of an idea, a hunger, a force of nature. But here, all that aura of power is gone. As soon as he started talking, he seemed so petty and diminished. The big bad villain had lost his teeth.

However, midway through the scene my opinion changed. The Red King is diminished—that’s the whole point of the scene. He’s frail and weak and so pathetically human. His feeble threats against Madame Blavatsky can be laughed away because she knows how hopelessly dependent on her he is. Even when his hand is on her throat and he’s telling her how much he’d like to kill her, Blavatsky still comes off as the one with all the power in the scene, to the point that she lectures him as though he’s a petulant teenager.

I found this a rather interesting development. The relationship is obviously very volatile, and I’m kind of curious to see it explode. More than any speech by Baltimore, it was this scene that really hit home that the guys have a real chance of being able to genuinely defeat the Red King. He has never been so weak before.

It was one thing on the final page of “Empty Graves” to have Dr. Rose say the Red King had taken on mortal weaknesses, it’s quite another to see those weaknesses manifested.

Speaking of Dr. Rose, it is truly terrible to see what has happened to him. Since the end of “Chapel of Bones,” I’ve felt that he’s been changing, just like Lord Baltimore changed, but into something wholly different, and it appears this issue confirms that theory. He’s shouldered a duty that leeches at him. Every scene he was in, he stole the show too.

An issue covering this much backstory and set-up could’ve easily fallen short, but Golden and Bergting always find the necessary drama and the right mysteries to tease to keep the energy up. Plus it was the sort of issue that was fun to think about afterward.