“Baltimore” comes to an end. 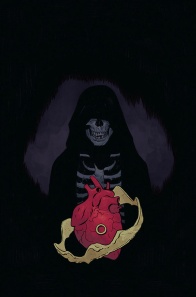 Lives are lost as Baltimore leads the final push against the Red King’s armies.

I’m just letting you know right now, this review is going to be full of spoilers.

So this is the end of the “Baltimore” series, and taken at face value, yes, it certainly ends Lord Henry Baltimore’s story. This was an ending that’s been signposted for a very long time—Lord Baltimore was going to die—and I don’t think anyone would be surprised by this ending. We all knew that defeating the Red King would claim his life. The ending does exactly what you likely assumed it would do all the way back in “The Plague Ships.”

And that’s where the problem lies. “Baltimore” is not the same series that it was back when “The Plague Ships” came out. It has since evolved. Volumes 1–4 are notably different from Volumes 5–8 thanks to the expansion of the story’s scope from a sole protagonist to a team, and “Baltimore’s” ultimate ending is written like the series is still about a sole protagonist. You could have removed all the supporting cast (except Childress) and the ending would have remained essentially the same.

Lord Baltimore has been forged by the will of God into exactly what he needs to be to defeat the Red King, and he defeats the Red King because (1) this is what he was made for, so he basically can’t lose (2) his destiny is relentless and he can’t fight it (3) he has nothing else to live for. These elements have all been in play since the very beginning. Baltimore defeats the Red King because the story requires it, not because his journey has changed him in any real character-based way. I was hoping throughout the story that a fourth, unknown factor would arise, something that Lord Baltimore could only hope to achieve by overcoming a character flaw, by truly challenging himself instead of being thrust along by destiny.

And part of the reason I expected that was because of Volumes 5–8. Before these volumes, we were only really presented with questions prompted by Lord Baltimore, even in the few moments when he had the occasional companion with him. The expanded cast in Volumes 5–8 brought with it conflicting viewpoints on the same subjects, begging questions previously unasked. Can a man that has lost touch with his humanity truly save humanity? If a man lives for nothing, then how can he muster the strength to do what he must? How can Baltimore be an effective weapon forged by God when he resents his maker?

The mere asking of these questions altered my expectations of the ending and I had hoped that at least some of them would have some bearing on the final outcome. Instead these questions were sown only to create conflict within the group that had formed around Baltimore, but Baltimore himself remained untouched by them aside from occasionally vocalizing his anguish.

The other problem with the ending was the narrow focus on Lord Baltimore. The rest of the cast have things happen to them in the ending, but no arcs. The intensity of their existing problems simply increased and then the story ended. So Dr. Rose, a man that was once a healer, drifted from his original purpose and suffered; in the end he becomes an instrument of death and suffers more than he ever has before. Sophie was a woman whose pain was causing her to drift further from those who would love her; in the end she pushes away the man she loves most and he dies. Judge Rigo was a man ruined by fear and doubt, whose flaws cause him to drift from his purpose into seclusion; in the end he goes into the final battle with more fear and doubt than ever and… well, actually Judge Rigo doesn’t really do anything after that. He was a wasted character in this arc.

The real problem here is that the driving action behind all of this is… drifting. Each character ultimately succumbs to their flaws, so their arcs should be structured as tragedies, but it’s hollow because they never fight it or lean into it. They are impotent in their own stories.

I needed Judge Rigo to either find a reason to believe again or sink so deeply into doubt it comes with a heavy cost. I needed Sophie to give up so completely that she is responsible for the death of the man she loves most or to find she can’t surrender that spark of her that still yearns for closeness and fights for it. I needed Dr. Rose to embrace the monstrous thing he’s become or to fight so hard against it fundamentally breaks him.

But there’s something more important than all of that: I needed the arcs of the supporting characters to affect Baltimore’s. And I mean to the degree that if that change hadn’t occurred, Lord Baltimore would have failed to defeat the Red King.

For a long time in the series, it was said that anyone that joined with Baltimore in his fight would die—it was part of his curse. Despite this, in Volume 5 Baltimore eventually comes to a point where he accepts the help of those around him to do what must be done. This was a major turning point for the character. And along the way, though he had thought himself incapable of caring anymore, Lord Baltimore discovered that he did care after all when his childhood friend, Childress, died.

That realization bleeds into “The Red Kingdom,” especially in moments such as when Kidd died and we can see how it pains Baltimore. This element was never explored beyond that though, which seems strange for such a core part of the story. I felt let down here, because Baltimore deliberately distanced himself from those that had chosen to fight by his side, to protect them and to hide himself from the pain of losing them, and yet it still cost them. Kidd still died.

And Baltimore can see the ruin he has wrought by breaking up the group. All his companions are worse off for it. Despite his efforts, there is nothing Baltimore can do to spare them from the consequences of their choice to join him. And Baltimore is burdened by this because he cares.

This is huge. Baltimore cares. I feel like this was the element missing from the ending, this seed that was never developed to bloom. All this time Lord Baltimore was going after the Red King because he must—he has no real choice in the matter. But what if in the end instead of merely accepting his fate, he was actually driven toward it? If he was free to make the choice, he’d still choose to go after the Red King—not so he can finally rest/die, but so that he can spare the people he cares about from further suffering.

What if the man who had nothing to fight for for so long had chosen in the end to fight for his friends? And what if that was the fourth element he needed to win?

OK, I need to talk about another problem I had with the story, and this is less of a structural thing and more something that just didn’t sit well with me. Harish and Sophie were friends that grew into something more, but Sophie retreated from that because she had no hope left for any kind of future. She had already consigned herself to the grave. Harish took the rejection badly and spent the rest of the series being angry about it until he was killed. Unfortunately, he ended up being very one-note in the final arc.

I get that Harish is upset, but I feel like the story could have more articulately explored where that hurt is coming from, even if Harish himself isn’t consciously aware of it. Yes, he’s upset that he was rejected, but far more importantly, he can see how self-destructive Sophia’s become.
He still cares for her, so how could it not hurt him to see her so willing to throw her life away? And yet he’s powerless to do anything about it, and that frustration manifests as anger and hostility.

“Baltimore” is a tragedy, that much was clear from the beginning, but tragedies only work when the weight of what’s been lost is clear. That’s not the case here. The emphasis is instead on characters fulfilling their destinies, doing what they always knew they’d have to, which to me is rather sterile territory dramatically, giving the illusion of character focus, while actually prioritizing plot mechanics.

It bothers me more because Golden and Mignola already got it right the first time, when they ended Baltimore, or, The Steadfast Tin Soldier and the Vampire with Lord Baltimore ripping out his heart. When a story gets a sequel or continuation, I need an ending that’s at least as strong as the original, but this ending is lesser. This certainly wasn’t a bad ending, but rather a perfectly functional ending which left me feeling unsatisfied.

Final verdict: 7. Lord Baltimore gets the ending we all saw coming, but the series leaves its supporting cast adrift.