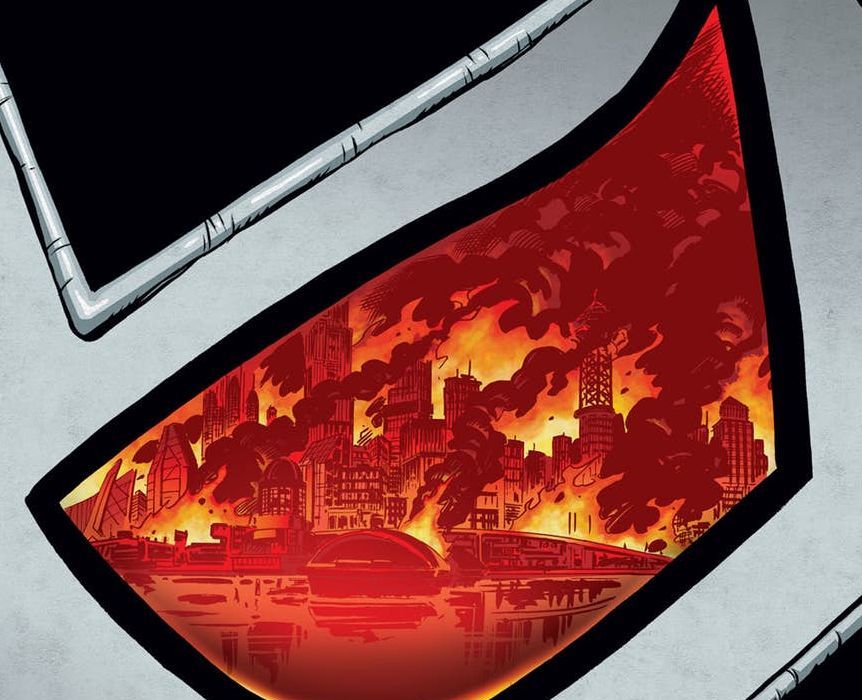 Chuck Dixon and Graham Nolan brought Bane into the spotlight way back in 1993 by having him do the unthinkable — break the bat. Since then, Bane has been developed into a pretty layered character, having notes of redemption, drug abuse, and even pseudo fatherhood. But now Dixon and Nolan are back to steer the ship. Let’s see how they go! 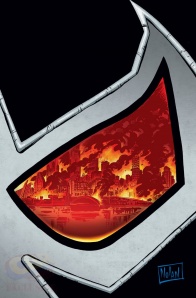 The co-creators of Bane make a triumphant return to the character, with a twelve-issue series that will push him to the limit! Bane is seeking to create a global criminal empire with the help of his original gang, Bird, Trogg, and Zombie. The Man Who Broke The Bat moves beyond Gotham to find new cities to conquer and new enemies to crush. He won’t stop until he stands at the top of the world of crime! For Bane, it’s all about CONQUEST.

First thing you’ll notice is that despite the solicit, tonally this is a real return to form for The Man Who Broke The Bat. Most of the comic that isn’t set on the boat (which isn’t a far cry from usual Gotham trappings) is set in Gotham. This isn’t necessarily a bad thing, however, as Dixon works this familiar setting to his advantage. The familiar setting firms grounds the setting, giving us something we understand before shipping Bane off to Qurac. This is where I started to really enjoy the comic, but unfortunately it only occurs within four pages of the ending.

I do like that Bane’s surrounded by all his old buddies again; with a villain like Bane that can verge on being two-dimensional, it’s important to have an interesting support cast to bounce off. I’m a big fan of Dixon’s characterization of Bird. There’s an almost Batman/Robin-like connection with Bird’s unwavering faith in his leader. “He’s alone,” he says. “That’s how he likes it, Trogg,” replies his bird-like drone Sergio. However, he operates closer to someone like Oracle would, providing tactical and moral support via earpiece. Not much is written about Bane’s other lackeys Zombie and Trogg, an omission I hope will be worked upon in later issues to create a real strike team feel for this comic.

The characterization of Bane himself is the real draw here, however. Fans of the original ‘Knightfall’ storyline will find a lot to love as Bane is cold, calculating, and aggressive. Dixon also chooses to take a closer look at how a man like Bane operates mentally, showing him talking to his stuffed bear he had during his days in prison (side note: that is one god damn durable bear). In this monologue Bane refers to Gotham as not only a ‘prize coveted by many.’ but also as ‘his.’ It’s a great telling detail that Bane still considers Gotham as rightfully his, but, and this is a small annoyance, I strongly dislike Bane referring to himself in third person. Dixon has elevated the character to great heights in the past, and I don’t think having him share the speech patterns of the Hulk is the way to do it.

Graham Nolan’s stylistic, jagged art works wonders at establishing tone here, especially those looking for the next ‘Knightfall’ type of story. The action here is fluid and fast paced, immersing readers from the beginning. The boat chase aesthetic is a lot of fun against the Gotham backdrop, especially with establishing familiar territory as I previously stated. The moment we’re shown Bane menacing up the side of the ship kicks off a brutal spy-esque sequence, but I would’ve liked to see more of Bane’s hands-on approach to combat. Nolan only has him delivering a jump kick, admittedly a pretty great one, before having him resort to weaponry and single panel action sequences. It’s a realistic approach for a decidedly unrealistic character, and seems to defeat the point of hooking back up to the Venom drug when you end up resorting to armed violence.

Before I continue as well, I must point out the slight cosmetic changes on Bane. I understand the point behind the new mask, it’s more faithful to Luchador style and you get more of Bane’s agonising grimace. But it’s just so strange and off-putting, especially with the oddly placed nose hole, that it makes me cringe every time I see it in action. Aesthetic and design decisions have a big say in the quality of the product, and I feel like this is a definite step back from the simple brilliance of the original costume. Now that’s out of the way, I don’t mind how streamlined the rest of the costume is, the cargo pants blend the Dark Knight Rises realism with the comic book/luchador throwback, and look great in action, blending effectively in the Qurac scene. It’s surprising how much these little additions can affect the overall story, but it makes more sense considering that you’ll be seeing this character in these duds for more than 50% of the time.

Nolan’s work has endured from the era so infamously known for over-the-top artists mostly because of his dynamic character and facial work, which is established well here. It’s less essential on Bane, who wears a constant frown for the most part, except when talking to his teddy bear surprisingly enough. Otherwise, you have the constant reassured grin of Bird, the terrified rat who lets Bane know about Chango, and even Chango himself, who keeps a steely yet confident face even in front of Bane. The whole issue is a pretty grim parade, overall, in honestly, and I think it would have balanced well to throw in some lighter content.

In a setting like Gotham and with Bat characters, there’s not a lot you can do in the way of experimenting or setting new grounds with coloring. However, Gregory Wright displays a deft hand at delivering what the readers want, which is ideal in a comic that plays off nostalgia like this. One subtler touch I like is the explosion of the cargo ship Bane has attacked. It plays out using a soft, smudged light against the dark navy night sky. It’s not much, but the smudging techniques work really well to convey the idea of an explosion, and not just a small glow. Another close attention to detail that works is the shower scene, where Bane remembers flashbacks with a red tint, signalling the tragic nature of his backstory.

“Bane: Conquest” is a solid first issue and return to form for OG creators Chuck Dixon and Graham Nolan, with a slew of others like Gregory Wright and Carlos M. Mangual in tow. However, there are a few problems with setting, character work and some aesthetic changes that keep this issue from being big. I’m intrigued to see how character development and other aspects play out through the series, however, so I’ll be coming back for more next week.

Final Verdict: 6.8 – Bane’s back to his old ways, with an entertaining solo debut that needs to work through a few issues.