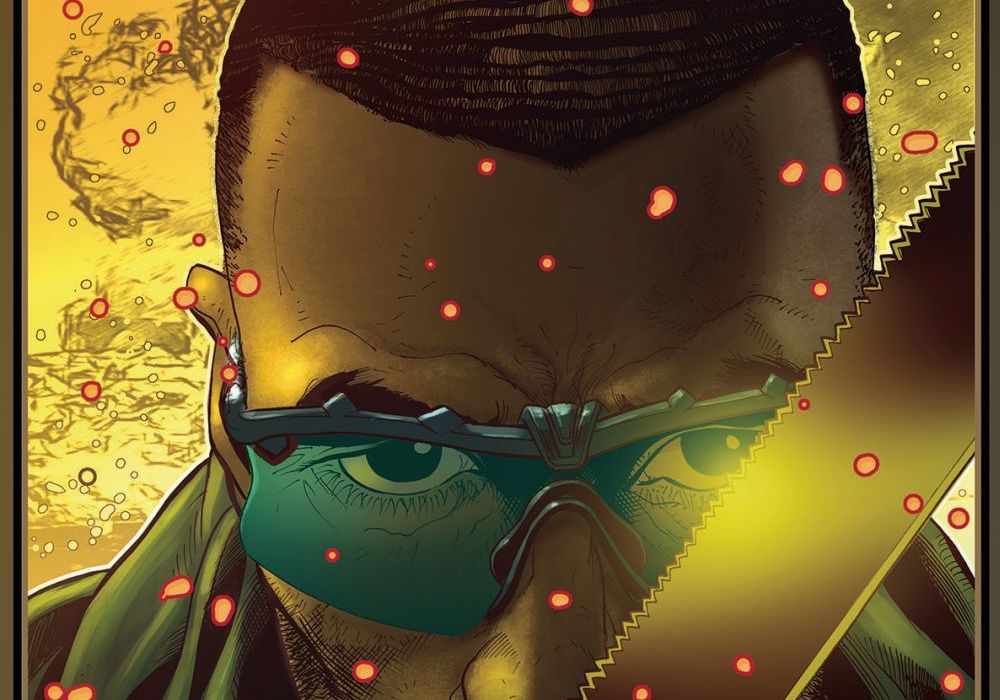 “Bankshot” #1 seems to have it all: beautifully drawn and colored multi-page action sequences, a mysterious main character who is a hero to some but a villain to others, geopolitical intrigue and a truckload of stolen treasure. So why am I not totally hooked? 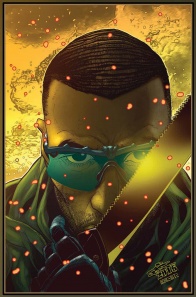 Marcus King: modern-day Robin Hood or terrorist? Maybe both? When Marcus comes face to face with an adversary who knows all of his carefully buried truths, he’s forced to become the man he has always pretended to be. And punch a small army of dudes. And blow up stuff. Lots of stuff.

“Bankshot” #1 does a lot of things right. First off, as the subtitle unequivocally states, “If it can explode, it will!” I mean, not quite everything explodes in this debut issue (after all, there are four issues left), but in one particular flashback sequence, it sure feels pretty damn close. Luckily, Chrisscross’ exuberant inks and Snakebite Cortez’s incredible colors – dominated by blistering yellows and scorching whites – perfectly capture the chaos of stuff getting blown to smithereens. Chriscross’ deep black motion lines supply the frenetic energy, while Cortez’s tightly constrained color palette of supernova shrapnel provides a mesmerizing aesthetic that grabs your attention and holds you transfixed. These are panels and pages to be savored, not glossed over quickly, creating an unexpected dynamic of intense action sequences that ask you to linger.

Chrisscross’ excellent work on human figures – especially faces – is also top notch, demonstrating excellent range. “The Dutchman,” in particular, absolutely dominates the pages on which he appears. His mirrored sunglasses, bright white teeth, flowing blonde beard and sardonic grin all paint the picture of a manipulative, self-obsessed villain whose downfall we immediately crave. He’s an instantly recognizable type, without being a mere cliché. Similarly, the as-yet-unnamed woman who suddenly shows up a mere five pages from the end of the book (and appears in only one panel), makes a stunning entrance that reverberates through to the end.

Appearing out of nowhere and casually framed in a doorway, she exudes casual confidence, draped in a purple, read and blue dress that feels portentous, though of what, we still don’t know. Amazingly, in a book full of bomb blasts and bullets, bloodied faces and heavy artillery, helicopters and fat stacks of cash, it’s one of the most arresting images we see, a masterful combination of paneling, line work and color.

Okay, so the art is great, what about the plot?

Well, the dialogue is smooth and straightforward, but it lacks a little punch. There’s not a whole lot there to distinguish one character from another. Rather, conversations are workmanlike, revealing backstory and plot points without a lot of subtext or other insights. Instead, this is dialogue that basically works on one level.

Similarly, we don’t yet get a real sense of the book’s protagonist. In the front matter we are told that he’s a “modern-day Robin Hood” or terrorist (or maybe both), who goes by the name Marcus King (not his real name, of course). As the book begins we also learn that Marcus beat up a bunch of FBI bigwigs the night before. Next, in an extended, action-packed flashback that comprises nearly half of the book, we learn that he served in an army somewhere in north Africa helping “the revolution” to install a new leader, only to attempt to de-install the very same leader when “he made friends that we didn’t like.”

Later, we also learn that Marcus lives on a private island that doesn’t show up on GPS, that he conducts business with Russian intelligence agents (former KGB), that he holds a significant grudge against someone he’d kill for free, and that once, when given the choice to die in the desert or drive a truck, he chose to drive the truck – which seems to be the root of it all.

The only thing we don’t learn, it seems, is what Marcus really wants. Marcus is elusive, his motivation, even more so. We’re caught in the classic dilemma of being told what happened instead of seeing it for ourselves.

Ultimately, a huge percentage of the action either takes place off-stage or is told in flashback. Very little of the story actually happens here and now. As a result, there’s no real immediacy. There are some tantalizing clues, to be sure – the stage is definitely set – but the urgency just isn’t there. It’s a story told at a distance, rather than one we’re immersed in.

None of this is to say that “Bankshot” #1 is a subpar book. It’s not. But it feels like it could be much better. All of the ingredients are certainly there. Hopefully this was all prologue and things we’ll scream at a break-neck pace for the next four issues. If Marcus King is supposed to be a selfless hero to some and a heartless villain to others, we need to see that unfold on the page, in the present, not through anecdotes and flashbacks.

Final Verdict: 7.4 The line work and colors are so well rendered you’ll want to linger, savoring the details. The characters and plot have potential, but there’s not a lot of dramatic tension, despite a multitude of panels of bomb blasts and bullets.