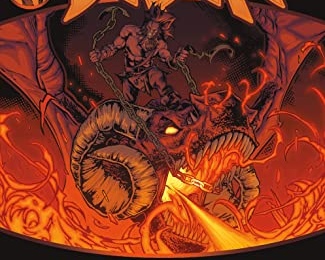 When we first reviewed “Barbaric” #1 in late 2021, we knew we were on to something. For the uninitiated, “Barbaric” follows the adventures of Owen, the quintessential barbarian bad-boy who travels the countryside slaying and getting his freak on. He’s also cursed by a talking axe that thirsts for blood, among other things. The story has really blown up, and now has its own spin-offs, one-shots, and other titles and ephemera. The world of “Barbaric” is expanding, and now is a good time as ever to dive right into the carnage. If some fantasy stories delicately world build, placing their set pieces on pedestals like Mr. Roger’s Neighborhood, then “Barbaric” does the opposite — this story is quite content to throw it’s pretty things in the air and shoot them down like skeet. “Barbaric: Hell to Pay” #1 follows this grand tradition, is pretty much just as big, bad, irreverent, as its preceding arcs. 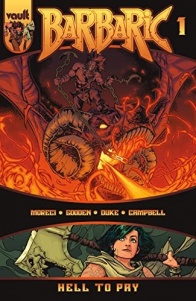 Barbaric is back and headed straight to hell in an all-new arc so big and bloody, it’s getting an extra issue!

While Owen tames a dragon with an old friend, Soren and Steel cross paths with someone else from our cursed barbarian’s past…who isn’t looking nearly as friendly. Hell hath no fury like a woman stabbed through the heart by an ugly f***ing orc.

Moving on, the last piece of “Barbaric: Hell to Pay: #1” that really ties it together is the art. Gooden and Dick go all out, and never phone it in. “Barbaric: Hell to Pay: #1” has a diverse cast of monsters — we have fish demon deities (and its spawn), classic orcs, Rancor-esque dungeon beasts, and a wide variety of other creatures. That’s a lot to pack into twenty-some pages, but no creature feels stale or undercooked. Even with small screen time, the monsters in “Barbaric: Hell to Pay” #1 make their mark. Really, there’s no wasted space in this story. What’s more, the lettering, writing, and art all work in tandem to make these little monster vignettes shine. In just a few pages, we get a look into the Orc society, culture, and beliefs. Even if those things are totally silly, it still offers depth to the story, and makes the world of “Barbaric: Hell to Pay” #1 more meaningful than it has any right to be.

At the end of the day, “Barbaric: Hell to Pay” #1 is a victory lap of the series’ success, and still manages to add some new layers to the narrative. This story has a diverse cast, dynamic action, beautiful art, and solid writing. Take “Barbaric: Hell to Pay” #1 for a spin if you’re a veteran reader, and if you’re eager to jump into the world of “Barbaric,” now is the perfect time.

Final Verdict: 8.8. Brutal, bloody, boisterous, and all that bad bad good we love from this story.