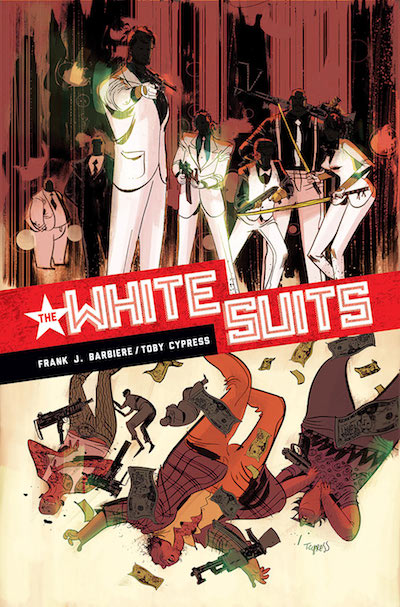 Don’t worry, folks – there is plenty of room on the stands for another noir comic when it’s this good. 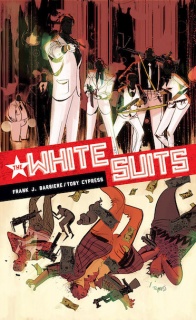 Mysterious killers dressed in white, they savaged the Cold War Russian underworld—then disappeared. Now they have resurfaced in New York, leaving a trail of dead mobsters. In this bloody wake, an amnesiac and an FBI agent search for the answer to a single question: Who are the White Suits?
• Debuted in the award-winning Dark Horse Presents.
• Violent noir action from Frank Barbiere (Blackout) and Toby Cypress (Blue Estate, Predator).

Much like with “Five Ghosts”, Frank J. Barbiere has a killer pitch for a comic book story and the end-product lives up to that promise. Here we have a mysterious group of well-dressed killers taking on the criminal underworld, but who are they and to what end are they doing this? Meanwhile you’ve got your vintage “man with a past” who, of course, doesn’t remember much about it – at least not without some major prompting. This pitch is deceptively simple, but it’s got tendrils, man. Barbiere makes sure it’s got plenty of tendrils.

Barbiere opens with a poetic description of forgotten memories. He approximates what it must be like for an amnesiac person to try and grasp at memories that are right there on the periphery of their mind. Not that I would know the first thing about what amnesia feels like, but this was one of the more poetic and elegant musings on the phenomena that I’ve seen in a noir genre that’s seen this sort of thing before. If the White Suits are the mysterious “Dark Riders” of this comic, our amnesiac hero is working against that mystery – trying to suss something from nothing. So in between intense bursts of criminal underworld violence, we get these reflective moments of desperation, confusion and determination. And again, just like on “Five Ghosts”, Barbiere strikes gold with his artistic pairing to drive these moments home.

“Punkrock*Jazz” is the name of Toby Cypress’ personal blog. It also happens to be a pretty apt description of what he’s doing artistically here on “The White Suits.” To draw an extremely recent comparison, Toby Cypress is turning loose his ability to do wild layouts and controlled chaos in much the same way that Wes Craig did in “Deadly Class” a couple weeks back. He’s been a hyperkinetic art talent for years now, but Cypress showed real subdued storytelling chops on Image Comics’ “Blue Estate” – where he shared the art duties and mixed in well with a variety of artists. “The White Suits”? Well, the art’s all his own here and the difference is mind-blowing.

Want proof? Take a look at a five-page preview: 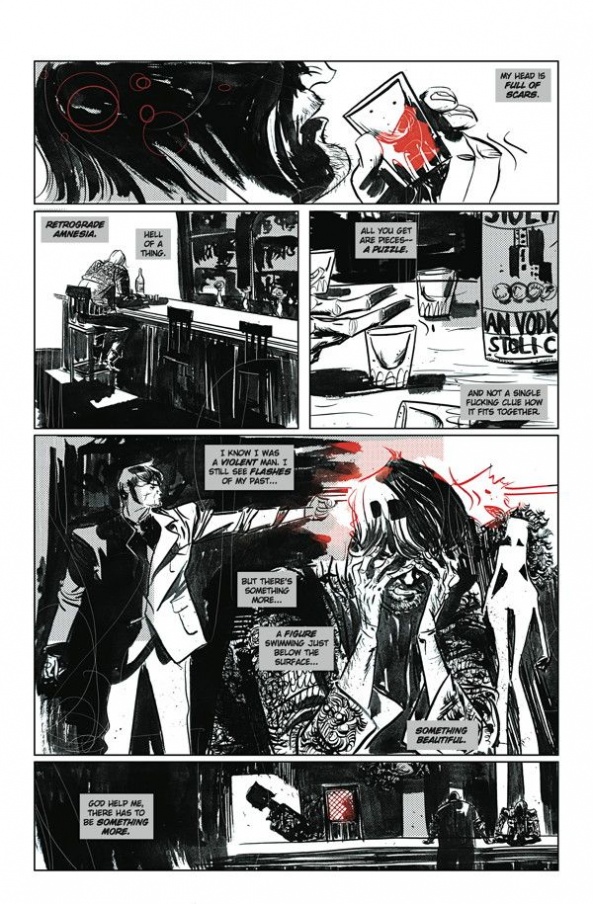 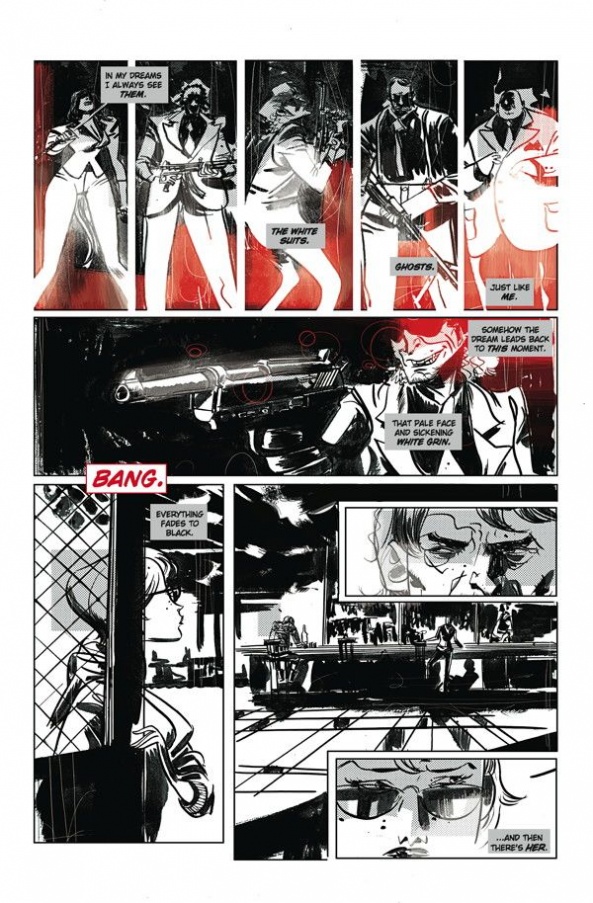 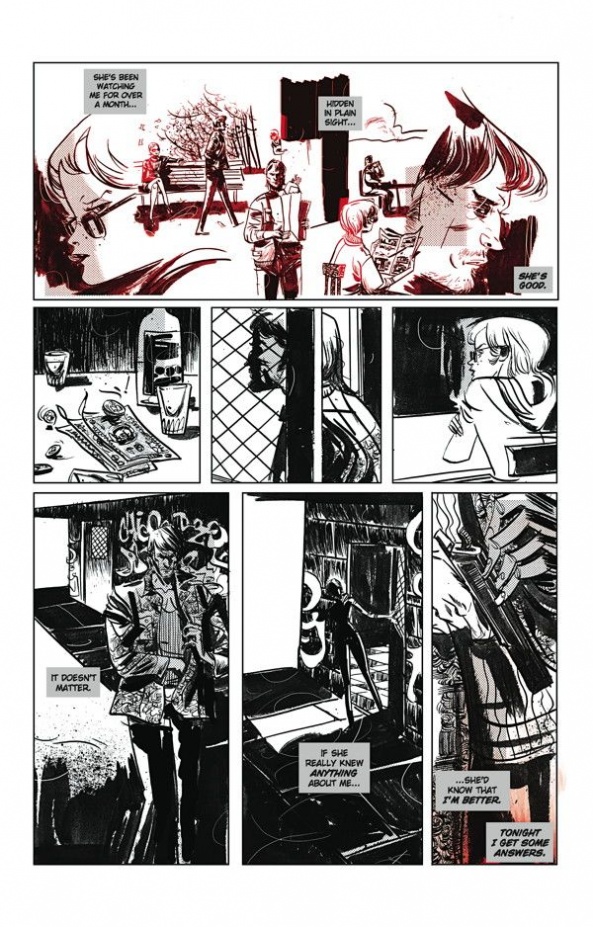 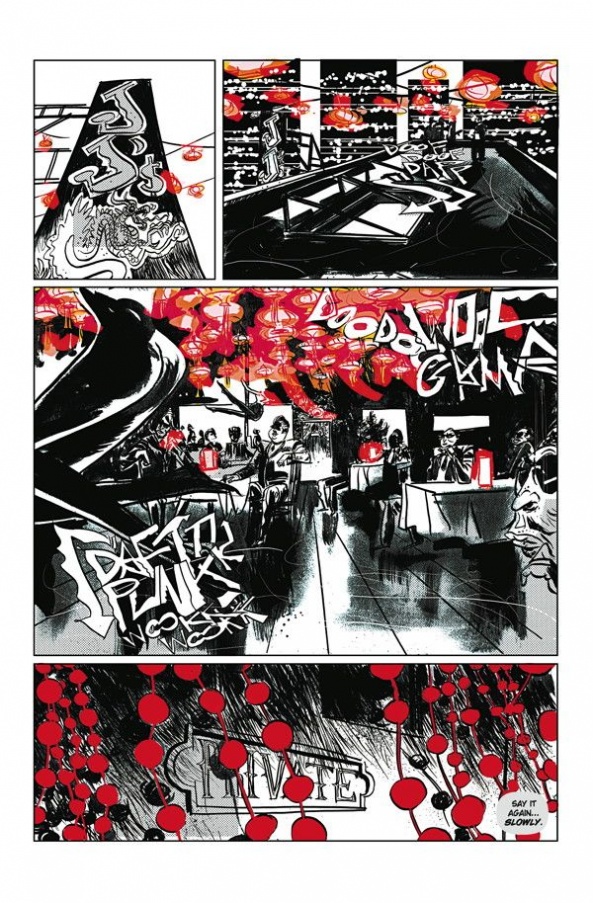 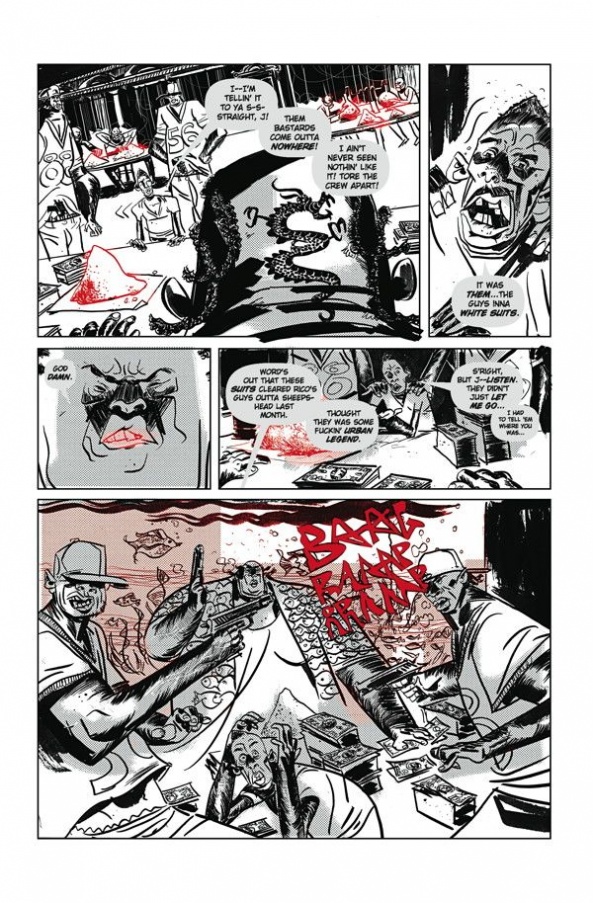 The word “experimental” gets tossed around a lot when talking about comic art – especially creator-owned stuff that is generally allowed to be more offbeat. Cypress is pulling stuff off in this comic book that feels like it should not work, but absolutely does. An early two-page title splash has a sprawling, violent display as its major focal point, while super-detailed images that flesh out some significant background flow out from that point. Our narrator speaks of memories acting as scars that you scratch and claw at to remember them – Cypress’ artistic approach early on in the issue visually delivers that point through fluid memories and spliced images of half-remembered things. These spliced-together images make these sequences beautiful in their intentional imperfections and asymmetry.

The “noir feel” comes from the interstitial panels that Cypress drops in – perhaps into a conversation or as a seemingly non-essential beat in between plot points. A close-up on a bottle of liquor. Some money on the counter. A bright set of red lights in an otherwise black-and-white world. All of these contribute to a seedy mood and feel, but one that could just as easily erupt into a fiery gun fight at any time. So far, the featured players move almost entirely within the smoky back rooms of bars and warehouses, making “The White Suits” a visually unnerving exercise in claustrophobic tension and violence. What’s more, for as violent and disturbing as the comic can be, Cypress actually leaves some even rougher moments to the imagination, so it truly feels as if the comic has room to push further and get nastier, if it wants to.

“Who are the White Suits?” Barbiere and Cypress take an elegant, but simple pitch and build a true mythos around it. For fans of noir or hard crime stories, this story has many different hooks with which to try and grab you. Barbiere proves once again to be a terrific artist-friendly writer and in turn we get something amazingly inventive out of Cypress. For fans of mind-bending artistic showcases and strong collaborative efforts, “The White Suits” is essential reading. It’s absolutely stunning.