Vaughan, Martin, and Vicente (aka Panel Syndicate) team up again for another limited issue run that is as groundbreaking in its story as it is in its distribution. 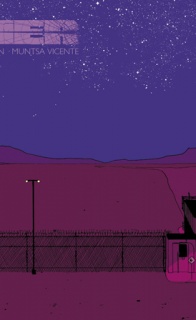 A while ago BKV and Marcos Martin took a pretty big risk with an unknown, original comic book idea. Rather than using their collective connections and industry influence to get their project green-lit by a publisher like Image, Dark Horse, or the like, they decided to set up a website of their own and distribute their new baby directly. What’s more, in a move that seemed equal parts interesting and slightly insane, they offered up their first issue, and every other issue in the ‘ten part maxi-series’ on a pay-what-you-want basis, giving readers the option to even download the comic for free.

Thus, ‘The Private Eye’ was born, and a little over two years – and a deluxe hard cover special edition published by Image Comics – later, it’s getting a sibling.

As with its predecessor,”Barrier” #1 is clearly a comic book designed to challenge readers. The main difference seems to be that, between their first and second books, BKV and Martin have decided to pull far fewer punches. While “The Private Eye” discussed themes of an oversharing culture and the dangers of governments and big businesses having access to our identities through our data, it did so under the protective veil of an imagined near-future dystopia; “Barrier” #1 is a much rawer book that wears its opinions on its sleeve. Seemingly based squarely in our current world, this first issue is a dual focus story from the points of view of Texan ‘Liddy’, a modern-day Cowgirl and border patrolwoman, eking out a living at one of the Southernmost points of the US, and ‘Oscar’, a Honduran would-be immigrant who puts his life on the line trying to find his own piece of the American dream.

It sounds like pretty bleak reading, so huge credit should be given to BKV and Martin for coaxing a compelling and powerfully human story out of what could have easily descended into pseudo-propaganda. “Barrier” plays with the concepts of tension and isolation in a truly captivating way. Utilising its extended run-time (53 pages gives the book real room to breathe) BKV’s script has space to be understated. Liddy’s initial gruffness is Eastwoodian in its strength, but as the book continues, it gives way to a fragility that feels like a much more three-dimensional description of a lone Cowgirl. Meanwhile, Oscar’s bravery in the face of the adversity sets him up as stalwart hero, but as we follow him on his journey we start to glimpse slivers of desperation that make him seem more flawed; more empathetically human . BKV’s most impressive skill is that he manages to endear both characters to us even as he stacks them against one another.

Martin has, yet again, embraced the digital storytelling to deliver a series of landscape panels that feel as though they would be almost impossible to translate to a classic comic format. Martin contrasts Liddy’s dizzyingly vast and deserted vistas with Oscar’s cramped, urban cityscapes, peopled with worried faces and uncertain movement. There’s a real feeling of two separate worlds rubbing against one another in the opening half of the comic, and this feeling is fully realised in the second half as Martin shows us a montage of Liddy and Oscar’s movements miles apart and yet under the same sky.

BKV and Martin have woven a modern Western told both in English and Spanish, but the story is most deftly delivered by silence. The final third of the book is almost entirely without dialogue and, when combined with the landscape layout, it rolls along in truly cinematic fashion. Martin’s subtle facial expressions and powerful mirrored body language does enough to all-but negate the need for vocalised emotions. This is just as well, considering the fact that this comic is unapologetically bilingual. Liddy’s Texan American is balanced against Oscar’s South American Spanish, and neither side is given much in the way of interpretation, meaning that, whichever language you speak, their may be sections of “Barrier” that make you consider turning to Google-translate. BKV said that he expected some people might rush to do that, but that he hopes the book reads almost as well without knowing exactly what’s being said, and Martin deserves no small amount of praise for the fact that he’s definitely right about that.

In a world where mainstream comics get beyond long-term teases and constant reminders in order to keep the buying public revved up and excited, it’s refreshing to have something largely hype-free drop without fanfare and immediately find its way onto your pull list. Admittedly, lowkey digital releases might not be quite as successful for creators without BKV and Martin’s track record (“Saga”, “Y: The Last Man” “The Amazing Spider-Man”, “Daredevil”, I could go on…) but it’s still great to see comic book writers making strides both in narrative and distribution. Being willing to try something new is what makes both this book and this creative team so exciting, and considering it’s available right now, for free, you really have no excuse not to close this review and go and read it.

Final Verdict: 8.2 – A first issue that feels like the pilot for the best TV show you almost missed out on. Jump on it now and save yourself the embarrassment.