Joe Hill starts off his ‘Hill House Comics’ pop-up imprint for DC Black Label with the beginnings of a classic horror tale in “Basketful of Heads,” complete with hints to something otherworldly being not quite right in the town of Brody Island. 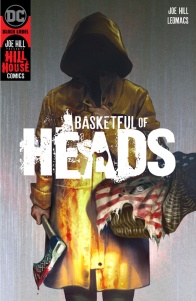 The rain lashes the grassy dunes of Brody Island, and seagulls scream above the bay. A slender figure in a raincoat carries a large wicker basket, which looks like it might be full of melons… covered by a bloodstained scrap of the American flag. This is the story of June Branch, a young woman trapped with four cunning criminals who have snatched her boyfriend for deranged reasons of their own. Now she must fight for her life with the help of an impossible 8th-century Viking axe that can pass through a man’s neck in a single swipe-and leave the severed head still conscious and capable of supernatural speech. Each disembodied head has a malevolent story of its own to tell, and it isn’t long before June finds herself in a desperate struggle to hack through their lies and manipulations… racing to save the man she loves before time runs out.

Plus, in the premiere chapter of the backup story “Sea Dogs,” which sails across all the Hill House Comics titles!

With “Basketful of Heads” #1, Joe Hill begins his pop-up ‘Hill House Comics’ imprint for DC Black Label with a taste of the horror to come. As the first part of his imprint, Hill has a lot to live up to, with part of the implicit goal for “Basketful of Heads” #1 being justifying the existence of ‘Hill House Comics’ and thereby other potential pop-up imprints for Black Label in the first place. How well does the author of NOS4A2 and “Locke and Key” do at this goal? It’s slightly difficult to say, requiring a bit of an examination of horror storytelling in and of itself.

Hill structures “Basketful of Heads” #1 in a similar way to the beginnings of a horror film. A lot of time is spent examining the main characters, potentially the victims, and very little is spent on the antagonists. This kind of style is very common, and tends to be used as a means of allowing for extra emotional impact when certain people are put in danger or outright die. Furthermore, this kind of storytelling gives more room to show how characters interact with one another before the situation gets too awful. As part of this kind of storytelling, series protagonist June Branch (according to the solicitation) is kept out of the spotlight in favor of her boyfriend, summer deputy Liam Ellsworth, with Hill’s focus remaining on the latter’s relationship with the Brody Island police chief’s family. On the one hand, this kind of writing can allow us to care more about what happens in the community. On the other hand, this kind of decompressed comic can lead to myriad problems on its own, and shows why film-style storytelling doesn’t necessarily translate well to a comic book series.

By focusing on Liam rather than June, Hill seems to, whether intentionally or unintentionally, make his protagonist into a satellite character in her own story. Even if her outsider perspective is meant to be the point, “Basketful of Heads” #1 seems to place her into the role of “cop’s girlfriend from out of town” rather than give a wider identity for her on her own. Although the “final girl” narrative of horror is well trod, that kind of familiar ground is still likely preferable to the nominal heroine being secondary even in her own story, given less focus than the police work and police chief’s family once they enter the picture.

With the way in which the story was announced, readers would be ready for what the premise happens to be, the use of the mystical Norse axe and the eponymous basketful of heads itself. However, aside from two panels part of the way through, the axe barely makes an appearance, and the basket itself only has a showing in the opening page. If anything, the story so far appears borderline normal by horror standards, with the revelation of how the series is to move into supernatural horror saved for a later issue. The creepy first page aside, most of the story in “Basketful of Heads” #1 could easily be in a more mundane police or home invasion story. Normally, this would be an odd choice, but between how the series was announced (seemingly spoiling the subsequent issue at the same time) and the fact that “Basketful of Heads” #1 is meant to be the beginning of a wider imprint in general, these decisions don’t bode well for the storytelling of later parts of ‘Hill House Comics,’ giving the impression that the narratives want to save the parts people are coming in to see for a later issue rather than help us see the premise up front.

Leomacs draws a very good story, helping to make up for some of the odder decisions in the script. Utilizing sharp, defined figures and medium-sized lines, he creates scene upon scene that would fit very well into old school horror comics. The result comes across as precise, yet slightly over-animated on an intentional level, helping keep things from being too real while never pulling away from the story’s tone either. Under his pencil, June and Liam are presented in the light of charming youths, while older men and women like the police chief or his wife are given more age lines and definition.

A multitude of “camera” angles help give the television or feature film treatment. Leomacs’s use of perspective, such as a wide view of a bridge or a close-up of the results from a suicide, help to add greater emotion even in the absence of words. The way in which June is framed in the closing moments feels like something right out of one of a famous horror film poster, while close-ups on the premise-giving axe pull away from said film-like focus to something more in line with many more comic stories, including two panels that seem similar except for one or two elements.

Much like Leomacs’s illustrations, Dave Stewart’s colors harken back to an earlier period in time. However, while Leomacs leaned heavier on the film-like presentation, Stewart concentrates more on the older comic book point of view. The relatively blocky coloration and at times minimal use of backgrounds adds to the inherent charm of the artwork, making it all feel like a story from an earlier period in all of the best ways and tacitly demonstrating how, at times, less is more when it comes to art of various sorts. Together with a gradually moving script and cinematic artwork, these color choices help to present readers with a story that feels much like an homage to an earlier era without being detrimental to “Basketful of Heads” itself nor insulting to said earlier period.