Originally published in French as a series of zines, Max de Radiguès’ “Bastard” takes us on the run with May and her son, Eugene, from both police and criminals in a heart-warming tale of heists, murder, and family. Radiguès’ efficient line cuts to the heart of the familial relationships at the centre of “Bastard,” as well as rendering tense moments of violent crime and destruction. Never giving more information, in his linework or in the plot, than he has to, Radiguès has given us a direct and alluring book that breezes by. 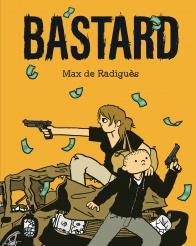 Cover by Max de Radiguès
Written & Illustrated by Max de Radiguès
After taking part in a historic heist — 52 simultaneous robberies at the same time, in the same city — May and Eugene are now on the run not only from the law and double-crossed former accomplices, but also their violent past. In a surprizing twist, these criminals are the unlikely pairing of a young mother and her preteen son. Thus begins the intense, yet touching, Bastard, Max de Radiguès’s Fantagraphics debut.
Bastard traces the deadly escape of May and Eugene as they crisscross the United States, encountering mysterious truckers, ambitious bandits, and senior citizens living off the grid in the Southwest. The duo race to get to their stolen cash while simply trying to stay alive. In the midst of the action, masterful flashbacks clue us into how they got into this deadly situation in the first place. Both bloody and tender, de Radiguès focuses on the familial relationship as much as the exhilarating plot elements, and his clear-lined style adds depth to the brutality as well as the moments of maternal love. Full of plot twists and high tension, Bastard is a hard-boiled page-turner featuring an unforgettable, adolescent anti-hero.

Immediately in “Bastard,” Radiguès sets up a grammar for this book, rules for how you expect the pages to look. One of the things that I find most alluring about comics as a form is how those grammatical structures; every book has to define its own shape, the only thing it needs is a sense of flow. Here, Radiguès opts for a simple shape of a six panel grid, it is immediately recognisable and clear. Radiguès describes the way he draws as ‘efficient’ and that attitude is on show in “Bastard,” every line, character, panel, and page has a clear purpose and recognisable shape.

This familiar shape to the pages leaves room for subversion. When he shifts away from the six panel shape, into nine panel grids, splash pages, and a couple other, less common layouts, Radiguès makes key moments moments stand out. At the midpoint of the story, a dramatic single moment is pulled out into a double page splash. This is a turning point in the structure of the story and as such needs a big impact. This is the only image that spreads across page borders and to the bleed. This is a moment frozen in time, as it has been separated from the rhythm of time in “Bastard” – the six panel grid.

The rules of the genre are also not as set as they first appear. In crime stories no one can be trusted, your guard must always be up. And, for the most part, May’s is. Early in the book, there’s a betrayal, someone thought to be trustworthy wasn’t. But later the opposite is true, they get picked up by this truck driver, and it seems he may be working for the people May and Eugene are running from, he is dressed much nicer than you would expect a truck driver to be dressed. But then there is a very sweet story behind his clothes, and he becomes a friend and ally.

Little switches and subversions like this happen across “Bastard,” and it gives it this sense that even small characters are real people, with changing needs, desires, and interests. Radiguès’ world feels authentic, it’s layered and lived in. Occasionally we’re treated to these vistas that read like establishing shots but don’t establish much. Desert landscapes with a road cutting through them. They have this unnatural sense to them, a beautiful landscape with a KFC sign, or a strip mall thrown on top of it. Radiguès creates a world of liminal Americana that these characters run through, though rarely find a place within.

They are just off from the world, sometimes they are just off from the panel itself. Just out of sight of the action, but still can be heard. When a character speaks off panel, Radiguès does something interesting with his speech bubbles. Where the tail on the bubble would normally point outwards towards the speaker, when the speaker isn’t visible, Radiguès inverts the tail, cutting a slice out from the round bubble. I don’t think I’ve seen anything quite like this before, but it works really nicely to convey the speech is coming from outside of that small world of the single panel.

“Bastard” is a graphic novel of subtle subversions. Like its characters, it is constantly moving through consistent structures on the page. Pushing forward through dramatic events, but never losing track of a deep empathy for characters. Max de Radiguès gives us a loving and craftful piece that is fun and sweet and character driven.