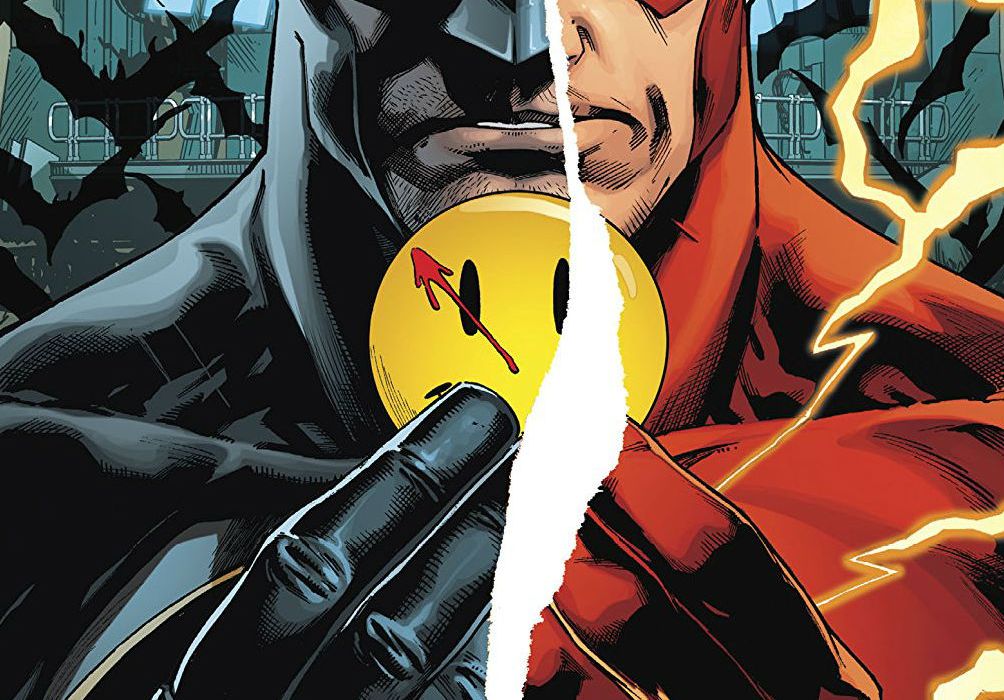 The actions of one man caused the birth of the New 52. “DC Universe Rebirth” made us aware of who, and the implications (both in and out of the comics) begin here. 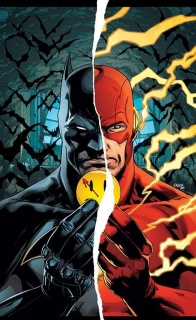 “THE BUTTON” part one! The cataclysmic events of DC UNIVERSE: REBIRTH #1 continue here! The Dark Knight and The Fastest Man Alive, the two greatest detectives on any world, unite to explore the mystery behind a certain blood-stained smiley button embedded in the Batcave wall. What starts as a simple investigation turns deadly when the secrets of the button prove irresistible to an unwelcome third party—and it’s not who anyone suspects! It’s a mystery woven through time, and the ticking clock starts here!

You know, I really did debate on whether or not I’d talk about the gigantic decomposing elephant in the room that is ‘The Button’ or just review this issue cold, but you really cannot escape it, can you? I did call DC incorporating Watchmen into the main universe the veritable shit in the punchbowl that is ‘Rebirth’ and this story, entitled ‘The Button,’ isn’t so much scooping it out as it is pretty much pressing the turd right into your face and taking a big ol’ whiff.

Because let’s face facts: not only is the idea of bringing Watchmen into DC Universe a terrible idea, but there kinda is no real ethical way you could actually tell that story. We all know the tenuous relationship formed between Alan Moore and DC in regards to “Watchmen.” We all know the insane pedigree and influence that “Watchmen” has had on the superhero genre and medium as a whole. And we know that DC has tried before to capitalize on that same pedigree when they thought it was a good idea to create “Before Watchmen.” Remember that? Utter shamelessness. Now we are back to that same idea of adding on to “Watchmen” when it is unnecessary. The shadow of this controversy is going to be a shadow looming over this crossover, the creators, and DC as a whole for it.

If it seems like I am going a bit long about this is because there actually isn’t a whole lot that happens in “Batman” #21. It’s easily summarized: Batman is examining the titular Button in the Batcave (while watching a hockey game for plot/thematic exposition reasons — it’s just so weird seeing Batman watch hockey), calls Barry to have him come help, and then the rest of the issue plays off in a minute as the Button reacts to the mask of the Psycho Pirate and it brings in the Reverse Flash. Not just any Reverse Flash, but the Eobard Thawne that died at the hands of Thomas Wayne in “Flashpoint” all those years ago. Events continue to unfold as Thawne delivers a massive beatdown on Bruce, but interference from the one who stole ten years from the DC Universe (who is most definitely Doctor Manhattan) and issue ends with Barry arriving for the aftermath.

Structurally, King, Fabok, and Anderson have a well-paced tale. Of course they did, they’re riffing on the structure of one of the most well-paced stories in the medium (on another note, the works of Alan Moore so obviously influenced King’s work in “Omega Men,” “The Vision,” and “Batman,” so seeing him contribute to this story idea comes off a bit backhanded). The use of nine-grid panels is on full display throughout the book, whether it’s establishing a contrast between the fast-moving hockey game or watch Reverse Flash create havoc. That last part in particular provides some good fun because . . . well let’s face it, The Flash could pretty solo the whole Justice League because superspeed really does kinda trump most other powers. So seeing Bats on the ropes against a Flash that’s completely evil does provide some cathartic moments.

While I have been (and will later be) down on this issue I want to say that I really do like the team of Fabok and Anderson. I feel like they have grown and refined a lot these last few years to create an ultra-detailed style of Jim Lee or David Finch but without the . . . hmmm . . . quirks they’ve developed over the years. Anderson’s use of blacks and yellows to create negative space that is both reminiscent of the Button as well as Reverse Flash’s colors as he gives Batman a brutal beatdown was an especially cool moment.

That said, because the team is so tied down to riffing on the “Watchmen” format, there are some problems. Not every use of the nine-panel grid gels well with Fabok’s style. There are some instances, like when Bruce first sees the “Flashpoint” Thomas Wayne, where it comes off somewhat stiff and just not as sharp as it could be. Also, I’m pretty sure Dave Gibbons never copy/pasted five of the same panel. Hell, I remember “Invincible” parodying that technique years ago. Yes, I know that it’s supposed to emphasize the passage of time, but even so, it just came off as cutting corners.

I have to readdress the hockey game because it does serve a dual purpose. The first is to establish why Barry is late to getting to the cave and the second is to continue a theme that started in “DC Universe Rebirth,” about how things (like comics) that were supposed to be fun being co-opted and being made “dark” and “violent” and “gritty” as a brawl erupts in the hockey game which eventually results in a player dying. Like “DC Universe Rebirth” my big problem with this theme has more to do with those perpetuating it. Neither Johns (whose fingerprints feel very much on this crossover) or King are exactly innocent of making incredibly violent comics taking place in universes that are supposed to be for children.

Late in the issue, the Reverse Flash picks up the bloody Button (itself a nod to a scene in “Watchmen”) and is abducted in a manner not to dissimilar to how Mr. Oz has been abducting people (or giant monsters, in Doomsday’s case). But it isn’t long before Thawne is brought back in a flash of light-blue looking a lot more charred (this also a shout out to how Barry Allen died in “Crisis on Infinite Earths”) than usual, with eyes in fearful awe that he may have seen “God.” It would provide an interesting mystery, but it’s similar to how Pandora died in “DC Universe Rebirth” #1. And we know who this is and what this story going to be heralding, which just brings it back around.

Judging it alone, “Batman #21” is a competent enough start to a big event crossover. It provides establishment and a hook to get one back for the next issue. But it cannot escape the shadow its controversial premise casts, nor the disrespect the premise itself casts on its own heritage. It’s a bad idea that has been executed in a not terrible fashion and, in the case of Fabok and Anderson, provides a couple good artistic moments.

But I’ll give it this: it didn’t turn one of the most beloved icons in American culture into a fucking Nazi on the centenary of one of its Jewish creators, so it’s got that going for it.

Final Verdict: 6.8 – A decent introduction marred by its own very controversial premise.