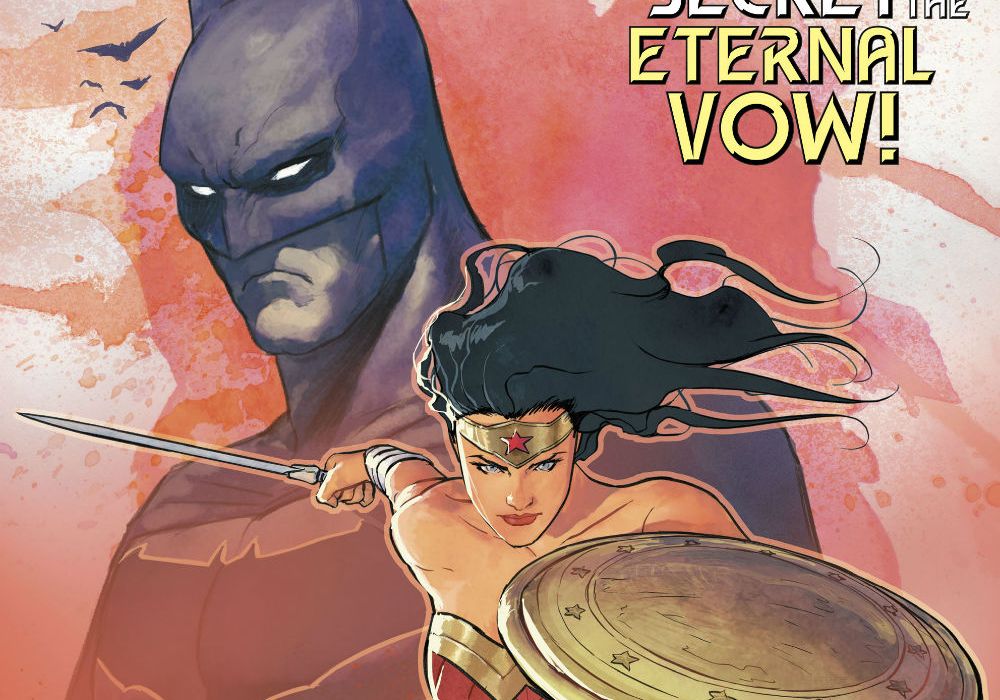 “Batman” #39 marks the second portion of King’s ‘Super Friends’ arc. And while the first segment focused on Batman’s and Superman’s friendship, this issue starts to cover Bruce’s and Diana’s relationship. This is certainly a good issue, but there are some problems that prevent it from being great. Let’s discuss! 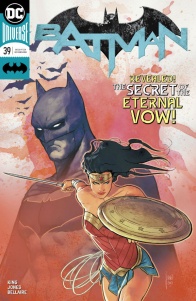 ‘SUPER FRIENDS’ part three! Batman and Wonder Woman fight together in an epic battle that will define and redefine their relationship. What bonds these two pillars of the DC Universe together? What might tear them apart? Find out as Batman continues his quest for the one thing he’s never had: happiness.

Tom King has definitely found his voice for Batman. On his interpretation, the character behaves as tough as ever but, at the same time, is very much aware of the insanity around him and within him. This is a Batman that isn’t afraid to be self-depreciating, to recognise that he might constantly be in situations that are not suited for human beings. The same can be said for his regular supporting cast, even with the limited face time they are provided with. Both Selina and Gordon are spot-on, with very unique voices and consistent with their interpretations on other issues, but still providing some truly funny and unexpected reactions to some of the events happening around them.

While dealing with Wonder Woman, King’s script is a bit more inconsistent. His Diana is often at her prime: a seasoned warrior, who revels in the face of battle and who is never afraid to speak her mind. There are other times though, where some of her reactions towards Batman seem out of place, as if the plot and arc’s motif are calling the shots, rather than character development. This is not a major problem, this is a Batman comic after all, but it does raise the expectations for the overall story King is trying to tell, which will only be fully understood as this arc progresses. A last page reveal in particular (which shall remain spoiler-free on this review) has the potential to be quite divisive depending on how it is dealt with on upcoming issues.

Talking about the overall plot, the premise is quite similar to that of “Action Comics” #761, published in 2000, where Superman and Wonder Woman are stranded on an alien dimension. It would be understandable if some readers called fault, claiming this issue to be too much of an analogue to that one. This would not be an entirely fair statement, as King expands the story choices by showing how the remaining cast of the book is reacting to this situation. More importantly, the character interactions between Bruce and Diana are very different than Clark and her. Superman is often portrayed as infallible, so some decisions and ethics come more naturally to him. For Batman, readers often expect some ambiguity, some internal struggle, so the larger questions being presented resonate better.

Over at the art department, Joëlle Jones adjusted her style perfectly for this issue. The lines look dirtier than usual, intentionally so, reflecting the harshness of both the environment and how Batman and Wonder Woman interact with one another. Her talent for facial expressions and for differentiating characters simply by the way they look is exemplary. For instance, compare how Selina’s and Diana’s expressions and facial traits are different while reacting to the same wardrobe change that Batman shows them. One can see what drives each of them simply by observing how they look and behave.

Specifically on Wonder Woman, Joëlle is able to pull of something that few artists can: to draw a feminine, attractive Diana, but without losing sight of her strength and muscular physique. This is a Wonder Woman that can kill the mightiest of foes, while looking incredible at it.

New character designs, however, are a bit bland. The looks on the Gentle Man (the characters that triggers Bruce’s and Diana’s travel to the pocket dimension) are something we’ve seen many times on books like “Conan” or “Thor.” Monster design, usually a feast on stories like these, is also generic, something straight out of traditional mythological art book. It feels like a missed opportunity that could have been better explored, making this specific dimension more unique than many that we’ve visited before.

Jordie Bellaire’s colors suit the mood very nicely with a more muted palette, both during the extra-dimensional pages and on Gotham City. The Gentle’s Man realm looks very rocky, earth-based, while Gotham displays a bit more color, light and layers, but not losing that dreary aesthetics. All in all, the atmosphere that illustrations and colours provide fit the story, even if they are limited in creating a new compelling world.

Final Verdict: 7.0 – “Batman” #39 is an interesting take on the ‘stranded island’ tropes, with strong characterisation on Batman and the regular supporting cast. The lights shone on Wonder Woman are still up for grabs and the art misses some opportunities to really explore this outlandish dimension.