Tom King, Tony Daniel, and team continue to narrate the convoluted story of how and why Booster Gold wants to give Batman a wedding gift. Unfortunately, not only is Booster’s plan extremely confusing, but the issue also fails to come together as a believable whole. 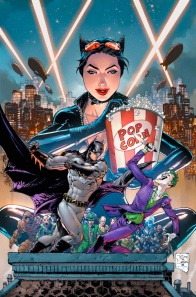 ‘THE TRAVELERS’ part two! Booster Gold’s wedding present has screwed up Batman’s past, and done even more damage to his present. Now, with the Caped Crusader himself refusing to cooperate, the only way for Booster to correct this runaway timeline is to get Catwoman on his side. But with her own past altered, can he make Catwoman recognize the qualities in her husband-to-be that brought them together in the first place? Plus, if Batman isn’t doing his job, Gotham City may become way more dangerous than our bumbling time-traveler might be ready for.

Tom King has been setting up the wedding of the century between Batman and Catwoman by using characters of the broader DC universe to highlight specific aspects of their relationship. The arc with Wonder Woman reinforced the bonds of trust and respect. The one with Ivy touched on comfort and support, regardless of circumstance. And this current arc with Booster tries to establish how one should be happy with the positive things in life, no matter how dire situations may seem. But the manner that the plot carries itself flies in the face of so much in terms of character development that readers cannot help but to feel it as something forced.

Unto the positive aspects first, though. Tony Daniel (very familiar to the Batman mythos) delivers another top notch work with this issue. Artists usually enjoy working on alternate reality stories as they provide a clear canvas to redesign such iconic characters and locales. More often than not, though, artists do get carried away with that freedom, implementing changes that simply do not hold up to what this new reality would bring in terms of consequences. Daniel avoids that trap, linking visual elements to the larger backdrop and life changes. Readers can notice that from Booster’s beard, to Catwoman’s “new” costume to how this reality’s Batman is geared up. It adds to a cohesive whole that this world does exist, even if because the crazy plans and ideas of a misguided hero.

Morey’s colors are equally impressive, especially when used to further portray Gotham City. This is a place very close to a hell-on-Earth, with red smokes filling the horizon, transparencies reflecting the duality of certain characters and seemingly peaceful oasis (such as Wayne Manor) being picture in more sobering tones. And when those worlds do clash, the ensuing chaos is depicted in strong reds, filling up the once peaceful greens. A beautiful package to look at.

Regarding King’s script: the writer certainly has won the benefit of the doubt in terms of how he can turn outlandish scrips on early parts of an arc into something believable towards its end. It was the case when portraying the relationship between Batman and Wonder Woman, and also on how the megalomaniac plan executed by Ivy did not fly in the face of years of character development for her (even if just barely). However, readers will find hard to hold hope for the final issues of this arc, because Booster Gold so far has been reduced to an idiot, with a plan that simply cannot exist outside of the mind of a crazy person. While writers and fans alike can probably find solutions to paint Booster in a fairer light in future issues, the fact remains that looking at this issue alone, there is little to redeem the time-traveling hero.

In some ways, the main problem with this arc and issue is that the same message could be delivered in much straight-forward ways, not relying on the already-tired time travel mechanisms, used so often by DC since Rebirth was launched. It feels like using a jackhammer for a job requiring a scalpel, not being concerned with how well-established characters suffer in the process. What is more jarring is how King manages to include gems on this issue: the entire backstory with Jason Todd is to the point and, although far-fetched, remains believable into something the character would do on such an extreme situation. It is a shame that stronger character portrayals are found more on the periphery of the issue, rather than on the main plot and leads.

Final Verdict : 5.5 – Although “Batman” #46 earns extra points for its beautiful and cohesive art style, the core problems with the plot are too relevant to consider it a strong arc for this run. While some hope can be held for the final issues of this story, King would need to pull the proverbial rabbit out of the hat to salvage this one.