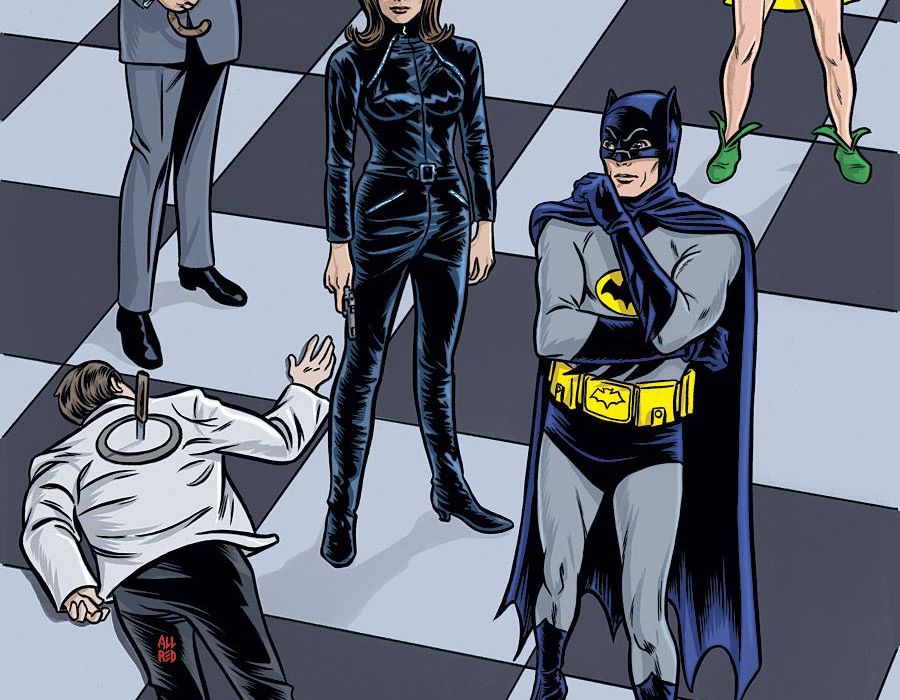 After previously crossing over with the likes of The Man from U.N.C.L.E and The Green Hornet, “Batman ‘66” are teaming up with yet another pair of wonderfully odd crimefighters, the formidable team of Steed and Mrs Peel. The other Avengers. Originally released in digital form, does it still succeed in print? 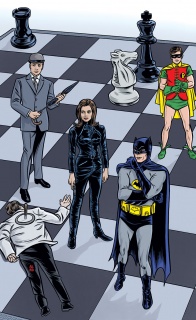 England swings and so does the Dynamic Duo in this historic pairing of two of the hippest shows from 1960s television. DC Comics and BOOM! Studios join forces to bring these iconic characters together for the first time! As Bruce Wayne shows the beautiful head of a UK electronics company the sights of Gotham, they are interrupted by the felonious feline Catwoman! Unwilling to leave Miss Michaela Gough unprotected, Bruce resigns himself to the fact that Batman cannot save the day. But some new players have arrived in town-though even as the lovely, catsuit-clad Mrs. Peel and her comrade John Steed take control of the situation, nefarious plots continue apace!

For those of you who didn’t grow up in Britain during the second half of the 20th Century or have never ventured into the realms of super late night TV, allow me to fill you in slightly on just who exactly it is teaming up with Batman and Robin in this latest crossover event. ‘Steed and Mrs Peel’ are the most popular and ubiquitous characters to star in the long running television series ‘The Avengers’, a heady mix of spy drama-on-a-budget and a peculiar kind of science fiction that became prevalent in dreary, post-war Britain, the show followed the two eccentric yet lovable spies as they sought to protect Queen and Country. Wrap this all up in a campy, technicolour filter and you have ‘The Avengers’, don’t be surprised if it reminds you of Doctor Who, the two shows share a co-creator in the form of Sydney Newman. Boom! Studios acquired the rights some time ago and, after an understandable change in name, has seen the likes of Mark Waid take on the titular pair. I can’t think of a better franchise for the often ridiculous ‘Batman ‘66’ to team up with. Not only does it work thanks to both series being firmly a product of the 60’s, but they both share other parallels too such as bemusing villains with highly wrought concepts and a Modish sense of style. Looking back over the previous crossovers I think “Batman ‘66 Meets Steed and Mrs Peel” makes the most sense.

So, how well does the concept work out as a comic book? Well first thing you must know is that originally this issue was released in digital form. In fact the whole series is a digital first exclusive, this means there is a certain amount of reformatting needed to make it work in print. After reading both versions I can say that nothing has been lost in translation. You can read the print copy and feel comfortable knowing you’re getting a cohesive story that is well put together. However, the one thing you’ll notice from reading this book, more so than the digital version, is just how sparse it is. Writer Ian Edginton has given himself just ten pages to work over, which is not really a lot to allow his story to any real depth or for artist Matthew Dow Smith to break free and truly wow us.

Though ultimately I don’t think this affects the writing in any detrimental way, on the contrary, I found Edginton’s plot to be fun and light, just what you’d expect from a ‘Batman ‘66’ title. I mean if you’ve come here for some Millaresque level of angst and introspection, I’m afraid you’re going to be let down. The story sees Bruce Wayne escorting Michaela Gough, owner of United Automation and wearing a swinging Mondrian inspired dress, around a rare gemstone exhibition when they are attacked by Catwoman and her henchmen. The attack has no real consequence, it is merely the excuse to introduce Steed and Mrs Peel into the book. Bruce of course cannot save the day, lest he reveals his true identity to Michaela, so it’s pretty lucky the British spies show up when they do. Yet, the best part of this comes when Alfred appears with Robin dressed as Batman in an attempt to throw everybody off. There a lot of wonderfully silly moments like this, Edginton knows how to play up on the eccentricities of each character without going overboard. Batman is always top billing in each scene, fans of Steed and Mrs Peel might come away disappointed however, Smith captures their likeness well while also leaving enough of his own stamp, but we don’t get any lasting impression to what they’re like personally. Considering the source material, this is a big disadvantage.

Smith executes admirably what little he is given, his action scenes are clear and tight and he excels at character design, as I mentioned earlier, he captures resemblances very well. Though this is a book with very little detail, to the point where most of the environments are so ill defined it almost appears to be in soft focus. If the issue feel sparse then it is primarily down to his page layouts too. Most pages contain one singular, large shot, mostly showing off characters in profile, with a few smaller panels arranged around it. Other times half of the page will be filled with four long panels laid out, side by side, in fact one page is just eight of these lined up. There is no dynamicism to it, every scene is just boxed away and rudimentarily placed next to one another. I was also surprised to see superstar artist Jordie Bellaire on colours. Her workload must have finally caught up with her because there is hardly any colour whatsoever, the entire museum is coloured in multiple shades of white and grey. Only the characters themselves have any colour, which does heighten how good Smith’s characters are, but in the end adds a slight artificiality to the scenes. This may be intentional, a nod to both shows’ low budgets and flimsy interior sets, though even I think that is stretching things a bit.

As a self contained issue, “Batman ‘66 meets Steed and Mrs Peel” #1 is perfectly fine. You may not get too much out of it other than a few smiles and an introduction to two characters you’ve never heard of before, but If this leads to people digging a little deeper into Steed and Peel’s adventures though then it’s done its job. Yet, with a final page “hiding in plain sight” twist, Edginton and Smith could possibly be just warming up so if you do want more, then by all means, stick around.